I don’t like being ill. I don’t see it as time off. I see it as time when I can’t exercise. On the other hand, over the past few days I know I wasn’t well because the thought of running was horrifying. I would pass runners on the street and think, ugh. So I have been taking it easy, forcing myself to eat though something has gone wrong with my hungry signals. I feel like I have no appetite, but when I eat, I realise I want to. Weird. This week is taper week but as the taper is not supposed to be zero, and as my mood yesterday descended to unable-to-exercise depths, I wanted to run today. My training plan called for 12 miles, so Jayne and I had planned to get the train to Saltaire, run to Shipley then get a train back to Leeds. It would have been nice and flat and different canal views to the usual city centre-Kirkstall-Rodley that I do quite often. On Friday I thought I could run 12 miles on Sunday, on Saturday I realised I couldn’t. So Jayne suggested running with the staff from Asics Leeds instead. Like Sweatshop, Asics now do free club runs, 5K on Wednesday and 10K on Sunday. I think this is great: that running has become so popular that shops are putting on runs, and supermarket chains and big high street shops are doing decent running gear (well done, H&M and Asda).

We ran 10K up to Kirkstall and back, and the pace was, er, brisk. At one point it was 8 minute miles. It’s odd for me to feel that I was the slowest in the group, but I was. But people ran at my pace to keep me company, and I was never left behind. Possibly it was because the pace was faster than I’m used to now I’ve slowed a bit with marathon training. Possibly it was my recovery energy levels which thought, what on earth are you doing? It felt hard. And then, afterwards, it felt great.

And so I meant to write a post about how wonderful it is to be able to run again, and exercise, and feel healthy, and I went upstairs to fetch my laptop, and then fell down the stairs. I banged my back on the stairs and my head on the door. Tomorrow my back will be black. But as long it’s mobile, I’ll still run with it. 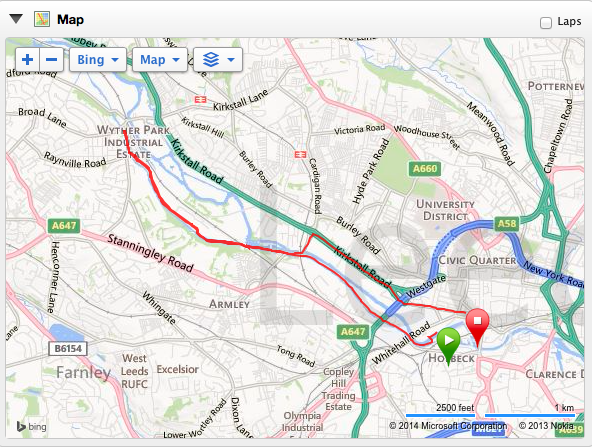