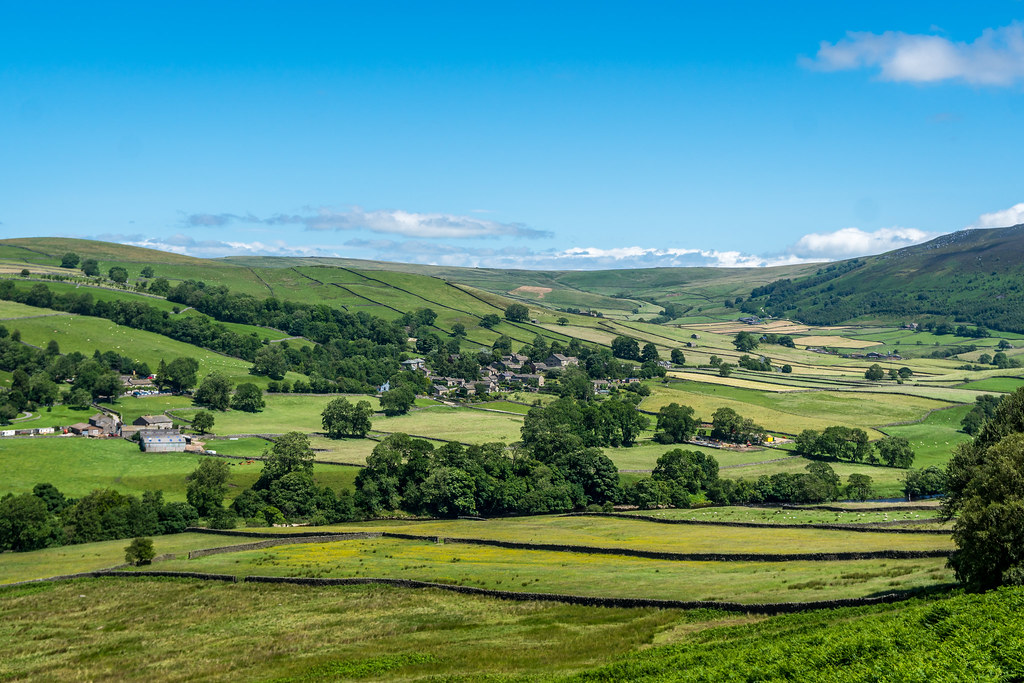 It’s nearly summer. Never mind that I had the heating on three times last week, and one night I nearly put the gas fire on too. Never mind that I got drenched while walking to the bus station on Saturday. I know it’s nearly summer for a few reasons: the menopause, the gift that keeps on giving, has now seen fit to give me hay fever, so I arrive at my studio after a two mile cycle ride streaming and itching and cursing nature even more than stupid drivers who cut me up at least once a commute. Another reason is evening fell races. Or evening races. I love a warm fair-weather evening, to set off after a day’s work (or procrastination), to gather with friends and club-mates in some beautiful part of the world, then to run for a while at your utmost, across moorland, along trails, up hills, and to know at the end that you have put your evening to the best possible use and would rather have been doing that than anything else. Last week four days after doing the Three Peaks I did the Dick Hudson’s race, named in fine fell-running tradition for a pub. I loved it. Here’s my report.

But I also know it’s summer when we drive to Appletreewick in the Yorkshire Dales national park and do the Charlesworth Chase. I’ve done it three years in a row, I think, and associate it with glorious sunshine because that’s what it seems to bring on in the weather. Saturday in Leeds was cold and rainy. Sunday in the Dales was as good as Sunday in the Dales can be. The Charlesworth Chase started when Nick Charlesworth and Sarah Martin, both Wharfedale Harriers, decided to celebrate their wedding day, by running a race where Sarah set off 20 minutes ahead of the race field, and the challenge was to catch her up. Yes. A bride hunt, without hounds. They then went off to get married, on the same day. Look, the Daily Mail even wrote about it. The race is still run by Wharfedale Harriers, and last year Sam Watson and his fiancée were the bridal couple. Sarah and Nick are still involved and Sarah usually hands out the — copious — prizes. Last year I got an age category prize and wisely chose a box of licorice allsorts. This year: who knew.

It’s an out and back race and in a way a simple one: you run up to Simon’s Seat from Appletreewick, and then you run back. It’s “only” just over five miles long. But those five miles pack a lot in: grazing fields, a stunning riverside run, steep climbs through rooty woods, rocky narrow paths then rocky wider paths, then a steep scramble up to Simon’s Seat, then do it all in reverse. But there is an unusual requirement. You have to stop and drink something then run 20 metres to the finish. This is a mandatory requirement. The choice is limited: a pint of beer, half a pint of beer, or a pint of fizzy water or Coke. Last year I chose fizzy water as I don’t much like beer. This year I almost chose the same as I’ve gone teetotal again, but I remembered how hard it was to drink a pint of bubbles, and so on my race form I selected half a beer on the grounds that it would be flatter.

The race HQ is outside the extremely beautiful Craven’s Inn pub. This a sixteenth-century pub with a rare Cruck Barn:

It also has “inspirational Ladies Toilets”. Not just because they are amazingly nice toilets in any situation but particularly just before a fell race (as they are not windy smelly portaloos). But because there is a series of pictures on the wall of inspirational women, which my fellow fell-running women were trying to guess when I got there. “I think that’s Queen Mary.” (It was Queen Elizabeth I). “That’s definitely Florence Nightingale.” And we all recognised Margaret bloody Thatcher.

Inspired, toileted, warmed-up, we gathered at the start. The kit requirements had been, “no kit requirements but apply suncream.” Even so, I took a jacket and 500ml of water. FRB took full kit because he always takes full kit. We were definitely in the minority: hardly anyone had any kit.

The race briefing included the usual instructions, and also “if you see an injured runner, then stop and help them. The race doesn’t matter.” It ended with “right, off you go then.” And off we went. I’d had race tactical advice from FRB, which was “there’s a fast descent, then it’ll be quite fast along the river, then you get to a kissing gate and then take your foot off the pedal or you’ll be knackered for the climb.” I must have done it right because I wasn’t knackered for the climb, and I even took places. I never take places on a climb. Upwards, and the path got rockier and narrower, and then the leaders came back, which required even more tactics as I tried to give them room, and they did the same. It was trod-dancing.

Scrambling now, and then actual climbing up the slabs: finding footholds, hauling myself up. There is a loop: runners going up to the left to get to the trig, then descending to the right. On the right there was an injured runner, and another runner asking him if he was alright. I heard him say that he was, that he hadn’t been knocked out. I got to the trig and descended, and saw the man’s head was bleeding. He said he was going to walk back to the finish, which was 2.5 miles away. A cyclist — perhaps the marshal — was taking off his jacket to give to him, but I said no, he could have mine. I didn’t think I’d need it on the way back as I wasn’t planning on falling. I also gave the man my water. He had an hour or so’s walk ahead of him whereas I hoped I would be back in under 25 minutes, and I’d drunk enough on the way up.

He said again that he was fine to walk back and he wasn’t concussed, so I left him and set off. Of course within five minutes I’d caught my right foot on a rock and face-planted, yet again. As usual, it was both in slow motion and so quick that I knew I could do nothing about it. I bounced, as usual, and got myself upright and assessed the damage. My right knee was throbbing, and I’d abraded most of it, along with my left palm and right thumb, weirdly. There was plenty of blood, but the cuts weren’t deep. Two runners who passed both asked me if I needed help and I said no, thank you, “I’m just walking off the knock.” Walking off the knock is a technical term* (*I just made it up) which means listening to your injured part, and realising your injured part is saying, “no, I can’t take impact yet, have pity.”

The throbbing wore off pretty quickly and I could run again. I was more cautious though now: there was still half a mile of seriously technical terrain. But I survived it, and once the terrain got less testing, I could get some pace. Down through the woods, down a track which was more technical than it looked. I was trying to lift my knees and lift my feet, and it must have worked because I stayed upright. Through the woods, along the gorgeous river, through grazing fields, and then there was the pub in sight up on a short hill. I felt like I was trudging, but I was doing alright. Back up the road to the pub, and just as I got to its garden, a woman overtook me who I remembered from last year. We both got to the drinks station — a tray of drinks on a table outside — and I drank my half and by god, it was delicious, even with a fly in it. She had chosen a pint of fizzy water. So I finished more quickly (and though I’d only had a half, I think I would have drunk a pint of beer more quickly than the water too) and beat her to the line. It sounds petty but it’s in the spirit of Charlesworth Chase, where places are won and lost on the pint. If you don’t understand how or why, try to run five miles as hard as you can and drink a beer while your digestion is still running at a 7-minute-per-mile pace and the last thing it wants is carbonated anything.

My knee was a mess, but the race first aid kit had been sent up to the injured runner, so I headed to the Inspirational Ladies’ Toilets and got busy with warm water and paper towels. The injured runner came up and gave me my jacket and water bottle back. His head looked sore and he had caked blood in his hair, but he seemed fine, and was very thankful. He said he had caught his foot between two boulders on the way off the summit, and actually somersaulted.

A quick change at the car park, which is the rather lovely garden belonging to Ted Mason, a Yorkshire farmer who is an exceptionally good fell runner. Then back to the Craven Arms garden for soup and prize giving. The winner, a young lad from Ilkley, had done it in 37 minutes, a minute off the record but astonishingly quick. First woman was Monica Lindsay, who had run the Intercounties race the day before for Scotland North. Then there were other prizes, and our friend Elaine Allen from Pudsey Pacers, who was doing her second ever fell race, was delighted to get first in the vet 50 category. She’d done Dick Hudson’s last week and got very lost, and her confidence had been dented, so this was an excellent cure.

After all the conventional prizes — including a prize for the quickest downing of a pint, for male and female — Sarah announced a Calamity Prize for Martin, the injured runner from Todmorden. And then, “and a special prize for Rose George from North Leeds Fell Runners, who helped Martin out.” A 9-pack of Toffee Crisps! If that doesn’t encourage Good Samaritanism, what will?

I was really touched, by the prize and by the fact that Martin had clearly passed on what I had done, when he had no need to. Fell running is a great sport, and fell runners are always stopping and helping the injured, even if that ruins their own race prospects. At Tour of Pendle, our P&B friend Charlie Mac was one of several very fast runners who stopped to help someone who had sliced his foot open. Charlie was up for winning his category but that didn’t stop him from stopping to help.

So I wish at the Chase that there had been more people carrying at least a jacket, despite the weather, despite the fact it was only five miles. I understand why they didn’t: it’s only ever going to be two miles away from habitation, what’s the risk? But I carry kit because of exactly the situation that happened. Kit is caution.

I didn’t have my watch, and though I dedicated a couple of minutes to helping Martin and then deciding to fall over, I think I still managed a four-minute PB. Charlesworth Chase is such a great race: I highly recommend it. Friendly, beautiful, excellent toilets, and many prizes. Thank you Wharfedale Harriers and see you next year for more chocolate.

One Reply to “Mine’s a half”