Kirkstall Harriers. It used to be the running club of the Leeds Postal Sports Association, which is why we still meet there for drinks after training runs and although we have been doing that forever, pins still drop amongst the old posties when young women dressed in lycra enter the pool hall. Our origins may be why we’re the only club – we think – to run on Monday and Wednesday, when most other clubs run on Tuesday and Thursday. We wear purple. Our symbol is a monk, because our club is near the magnificent and beautiful Kirkstall Abbey. During our Kirkstall 7 race, the valiant and very speedy Richard Joyce dresses up as a monk and races with cassock flying. We belong to the PECO cross country league, which is a series of 5 miles or so races around the mud and woodland of Leeds and surroundings. The races are great and sometimes you get hot pies or peas afterwards. Sunday was at Middleton Park, hosted by Rothwell Harriers. I’d had chips and mushy peas the night before and though I know that neither Veggie Runners nor my trainer Jenny will approve of that dietary choice, I swear the fat and carbohydrates made me faster. I ran 4.73 miles in 42:36. I nearly caught up with Paul Glover, who is faster than me. I was pleased (especially when they served jacket potatoes and mushy peas afterwards). And I was even more pleased when our ladies team placed first in the Premier Division. All these are things that I never, ever thought would matter to me. I didn’t think I was competitive about sport, especially having taken up running at the age of 41. And usually the person I’m competing against is me. But I have started visualising a target on my club-mate Marion’s back (a catching-up kind of target, not a murderous one), though it’s probably a vain hope: she is fast. Anyway here is my club at the PECO on Sunday, though without a monk. 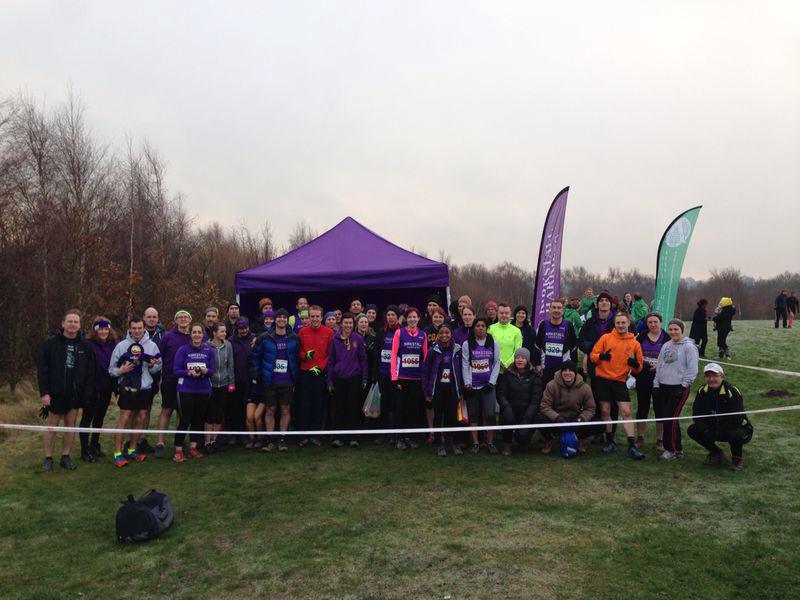