I read a lot about running. I geek. So I knew that I was supposed to take it easy after the marathon, even though it made little logical sense to me. I’ve done long training runs, and there were only six miles difference. I’ve done plenty of long training runs – 15 miles and more – followed by 10 miles or so the next day. But people who know more than me said: those six miles are a huge burden on your legs. The adrenaline of a race and the pressure of competition make a difference. And after the long training runs, you taper. Also, you are actually resting from all the training, not just the four hours and seven minutes of running.

I did as I was supposed to. I rested. I used my massage stick, a lot. I took ibuprofen for my aching knees, and wished that my legs didn’t feel like dead legs when I woke up every morning. I kept on eating at marathon levels, which is not a good idea. I walked and cycled and did a gym session with Jenny. And I made arrangements to do what I had promised to do in this: that, after the marathon, or rather the 16 weeks of marathon training, I would run up a fell with no Garmin, no training plan, no target and no pressure. I did. And it hurt.

My club-mate Andrew loves orienteering. He seems most happy with a compass and a map. He proposed doing a round the fell run setting off from Timble village near Otley. I didn’t know Timble, though I’ve probably been there as a child as whenever I tell my mother I don’t know somewhere in Yorkshire she says, yes you do, we used to go there often. Timble is a beautiful village that looks like a TV set and is obviously dizzyingly expensive. By the time we arrived I’d drunk far too much coffee and the money evident in the housing did not cover providing a village public toilet. There were two groups of us: Gemma, Laura and Jill were going to run around Swinsty reservoir, and Andrew, Jason and Paul and me chose to run up the fell. I was a little nervous about that, because Andrew, Jason and Paul are among the fastest in the club. Andrew has been taking it easy because of a back problem, but although he always claims he only wants to “jog round”, his biology overcomes him and he can’t help competing. I said, I want a steady run. They said, yes, Rose, no problem, innocently.

We set off in our opposite directions. I nipped into the first field I could find and used a pile of mud and hay as a backdrop for my toilet. Then we were off, and within 100 metres, the three men were running ahead. That would be my view for most of the next ten miles, except when I couldn’t see them at all. That was fine with me, and I was definitely not going to go fast, so I asked them to stay within sight.

We ran through woods and past dogs and their walkers. The weather had been due to be cold and with high winds. It was hot and lovely. The roads to Timble had been busy with cyclists. The Grand Départ effect. But there were no other runners. After a mile or so, we reached moorland. I love moors. The bleaker the better. Andrew had told Paul that he didn’t think it would be too boggy, as Paul only had his road shoes with him. He doesn’t much like fell-running, as “I don’t like the downhills,” but he must have been persuaded by the lure of the moor. 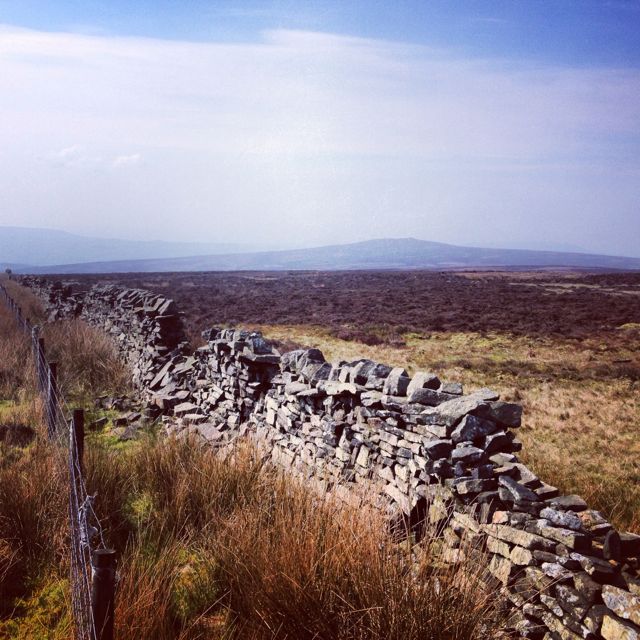 By now I was alarmed. My legs felt awful. They were heavy, leaden, lagging. I hadn’t intended to run fast, but I didn’t feel that I could even if I wanted to. I thought at first it was because we were running up a gradual incline, and we got to the top, I lifted my head and saw we were high up. 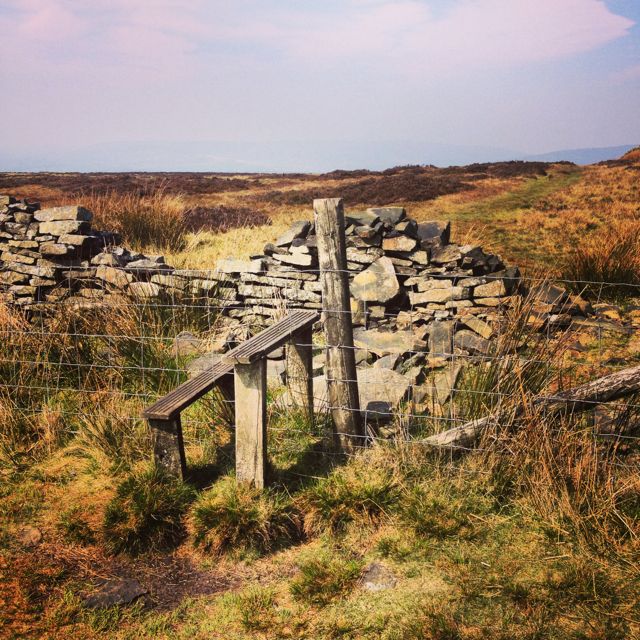 Ah. That’s why my legs were having trouble. The downhill after that was glorious: running freely over moorland and rocks and through bogs, where Andrew lost his shoe. 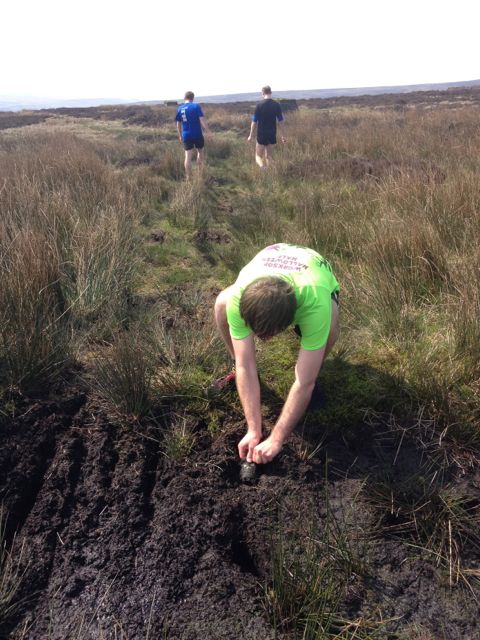 Oh, I loved the downhill. I loved it even when I couldn’t see the lads any more, then caught a glimpse of Paul’s head bobbing over some tussock in the far far distance. Paul has a lovely running style: he keeps his torso very steady, and his legs seem to glide. He was gliding over the moorland as if it were a racetrack.

As soon as I reached the bottom, my legs felt terrible again. By now I remembered that in the last three miles of the marathon my groin had felt strained. I realized that once again I’d been stupid about nutrition. I carried a bottle of water with electrolyte tabs, but I hadn’t brought gels because I thought it would be an easy seven mile run. But today was a day I needed gels more than ever, not least because I’d been hungry even before we set off, and because of all the coffee, also dehydrated.

I paid for it. The next four miles or so were a slog. I found myself walking up hills. Jason’s leg was cramping up by then. He’d also done the marathon, but because of the same cramp in the same leg, he’d done it in 3:47 instead of 3:05, as he’d hoped for. Unlike me, he hadn’t rested. This was his fifth run of the week. Even writing that makes me wince. By the time we found our way back off the moor into the woods, passing a decomposing sheep on the way, we were both walking. I was cursing my stupidity about food and drink, but I didn’t think my weakness and heavy legs were only due to that.

Afterwards, I felt as shattered as I had after the marathon. We had a pub lunch in Otley, which I speed-ate and after I got home, I fell deep asleep for 90 minutes, and was no use for the rest of the day. I was slightly worried by then by how wrecked I felt. Today I had a physio appointment at the hospital with needle-wielding Simon, who’s a runner, and I talked to him about it. He said a ten mile fell run so soon after a marathon was bound to feel awful. He said that when he ran the marathon, he took five weeks to fully recover. He stuck needles in my backside and knee, did that breath-sucking noise that physios, sports masseurs and mothers do (the first two at the tightness of my muscles, my mother at the size of the allotment I’ve just taken on), and twiddled. Until you have myofascial-releasing acupuncuncture, you probably don’t appreciate the overwhelming force of a twiddle. Simon said he had decided to be “more vigorous” with patients, but one needle was working so vigoriously, I was counting backwards from 100 in an attempt to tolerate the pain, before he came back to twiddle it again. For anyone who thinks acupuncture doesn’t work, go and find Simon. It does. It releases muscle tension, and it can hurt. Not the needle insertion, but the sensations they can cause. One twiddle sent a charge all the way down to my foot. Amazing. Painful, but amazing.

So. Rest. Low-impact exercise: cycling, swimming. It’s a sign of how difficult that run was – in the middle of glorious beauty and sunshine – that I’m not rebelling against that. 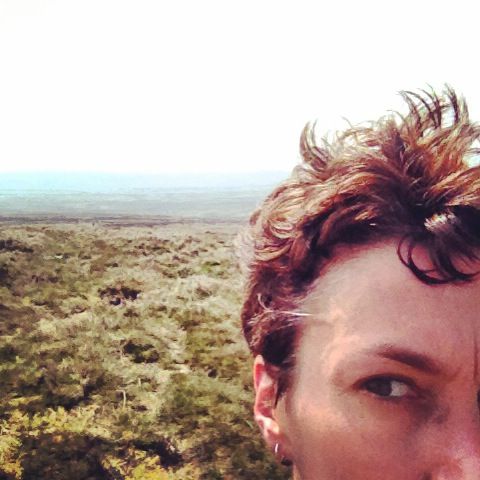