I have been running a lot and training a lot and writing not much, but also travelling. I was in Stamford, Connecticut, at a shipping conference which is largely made up of 2,000 men in suits, many of whom have more money than God. I had a day in New York en route, and was supposed to do 15 miles. But New York means seeing New York friends, and I’d had dinner with Adam, Vanessa and their gorgeous daughter Isla – not yet five, and she understands the solar system – along with too much wine. Alcohol, dehydration and jet-lag: I woke up wide awake at 4am with my head feeling like the inside of a ship’s engine: NOISE and PAIN. I was supposed to be running with Roger of ISWAN, the charity that has brought me to the US to do some talks and events. But at 4:01am I began formulating excuses not to run, namely that I was pretty sure my head would fall off. I took some painkillers and dozed, and at 5am I was still in pain, and at 6am too. When I finally awoke properly at 7, my headache was gone, the sun had risen over Manhattan, and I decided to run.

The night before, Vanessa had told me that it was the New York City half marathon in the morning. My reaction was not, great, I can see Mo Farah running, but, shit, now I can’t run up to Central Park because there will be 20,000 people there. The half marathon start was at 7am. My club mates on Facebook were asking me if I was going to watch, as Mo Farah was racing, but I had no intention of going to Central Park to deal with 20,000 people. So Roger and I gathered downstairs, with hats and gloves – it was about zero degrees, with a wind-chill of minus 10 – and headed west to Riverside Parkway. We got there, ran up a few blocks. It was icy but beautiful and sunny. And then the day got better still, because we had inadvertently run into the route of the half marathon, as all the tents and police cars and cheer-leaders made obvious, and within five minutes of us realising that, there was Geoffrey Mutai, then Stephen Sambu, and then Mo Farah. He didn’t look happy, maybe because we were yelling “COME ON MO GO GB” at him. Later I discovered he had fallen near the start. And he collapsed at the end, though he overtook Sambu. That’s not good news. I don’t assume that he’ll win the marathon, and he says he’s the underdog, but passing out for three minutes, as he apparently did, is an ominous sign. 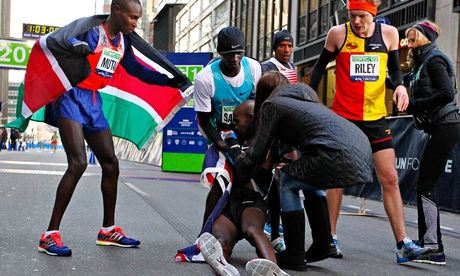 We carried on up the Riverside Parkway. It was a bit odd to be running in the opposite direction to 20,000 people, but at least the running and cycling path was pretty empty. And we got the cheerleaders and bands and DJs, though they all had their backs to us. After Central Park, the half marathon disappeared, and we carried on. Roger needed the toilet and lo and behold, a rare sight: an open, heated, clean public toilet in Riverside Park. Well done, New York City. I was still wearing hat and gloves but my hands were getting colder and colder. We could see the George Washington Bridge by now, where I’d intended to run to, but by now my right hand’s fingers were disturbingly solid, so I asked Roger if he’d mind us turning round and doing our own half marathon instead of 17 miles. He didn’t. He’s also marathon training, but for Stockholm, at the end of May.

The other way was warmer. The wind was on our backs. My hat came off. And we ran alongside the marathon runners trying to figure out how our paces matched up. It was all very Big Running, as Richard Askwith would say. I reviewed his book Running Free for the Guardian, and liked most of it very much. But I didn’t much like his oppositional stance: pure, natural running versus Big Running. I object to inflated race fees, but if someone – i.e. me – wants to spend money on kit, then why not? He’s right though about being imprisoned by paces and GPS watches, and once the marathon is done, I plan on putting my watch away for a while.

When we got back to the hotel in Tribeca, and after I had gobbled a bagel with cream cheese, I found two paracetamol tablets by my bed. I hadn’t taken any painkillers. Placebos are great.

The shipping conference was at the Hilton hotel in Stamford, Connecticut. The city is supposed to have many rich residents, as it’s on the Gold Coast next to Greenwich. But the Hilton was in an odd industrial park next to the turnpike (I love that Americans use that word for a motorway, and expect always to see horses and carriages). It didn’t look like promising running land. Nonetheless I asked a receptionist to recommend a good place to go running. He was the wrong person to ask. Not because he looked unfit and overweight, but because he said, “I recommend you use the hotel gym.”

I said, “No,” and he looked shocked. But there was no way I was going to spend three days at a conference, stuck inside, and run 15 miles on a treadmill. Anyway I don’t think I can. The most I’ve run on a treadmill is 5 miles, when I was on a cruise, and that was hard going even when I had the ocean to look at. So I gave up on the receptionist and turned to Google. I usually use walk jog run or map my run, but the problem with those is that you have no way of judging whether your peers like running through Blade Runner hell-holes or whether they think carefully about their routes. Finally, though I’m not sure how, I found a route down to something called Greenwich Point Park.

The next morning I got up and set off. It wasn’t promising: storage warehouses, chain-link fences, somewhat grim streets. But then it began to change, and the houses got bigger and bigger, and suddenly it felt like I was running through old money: huge painted clapboard houses, US mailboxes, green lawns. There were no pavements on much of the route down but that didn’t matter. There were no runners either, but that could be because it was freezing cold. After 4 miles, I reached the park, and a beach, and the ocean, and it was beautiful. 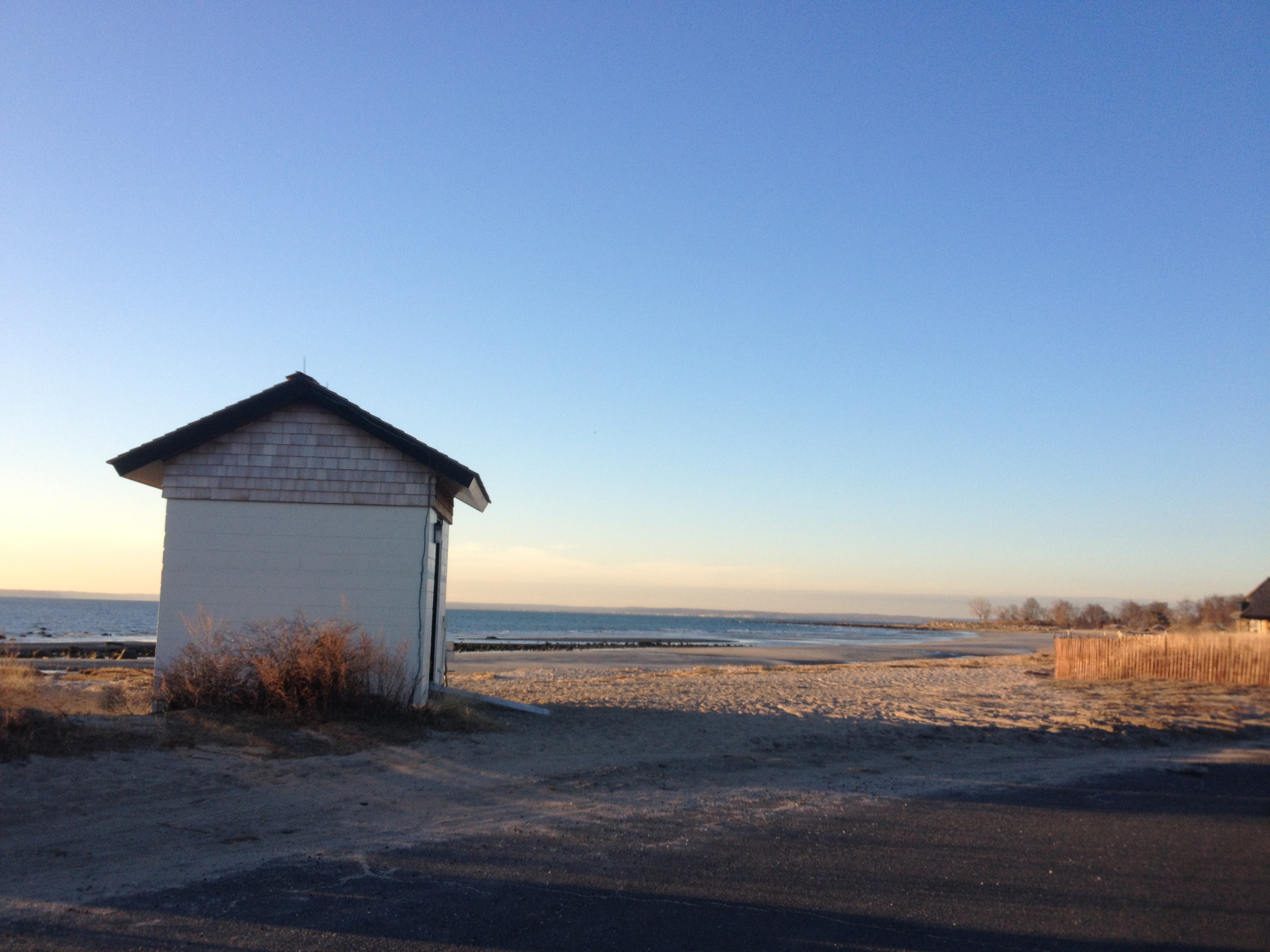 It was so beautiful, I ran back there every day to cleanse hotel-life from me. The conference was interesting, but it was a conference, and there were suits everywhere, and I needed to run. The next day was the Run with Rose event, somewhat publicised to link up with my marathon fund-raising for Seafarers UK. Roger had promised to do the run, and Jason Zuidema of the North American Maritime Ministries Association, who had also been instrumental in getting me to Stamford, had apparently been training especially, having last done a 10K a year earlier. Some other maritime chaplains had said they would come too but that morning was even colder, and the chaplains, from their table in the warm breakfast hall, said they had, oddly, changed their mind.

So it was me, Roger and Jason, and our escorts: Noah and another guy in a car who were filming us for NAMMA. I don’t know what purpose me running down a road will have for North American maritime matters, but I hope it has some. By now I had new shoes and new compression sleeves, bright orange to match my jacket and hat, so I looked like a Belisha beacon, without the stripes.

Roger and I had come with full cold-weather gear. Jason was in a t-shirt and shorts. No gloves, no hat. He lives in Montreal. It was twenty degrees colder there. His car was filthy and when I asked him what he had driven through, he said, “Canada.”

We took a more direct route, and we made it. This time there was time to hang out on the beach and photograph iced sand: 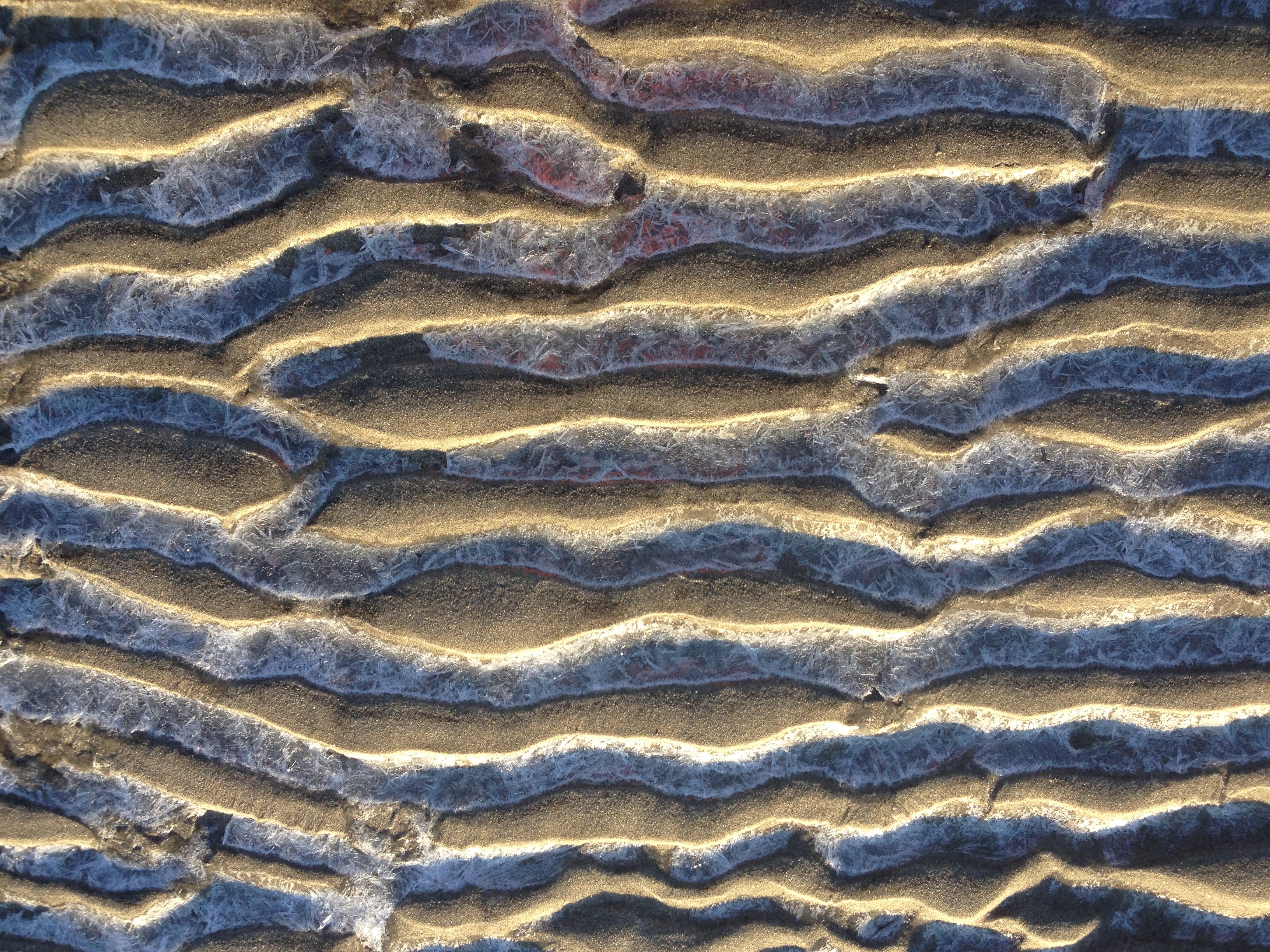 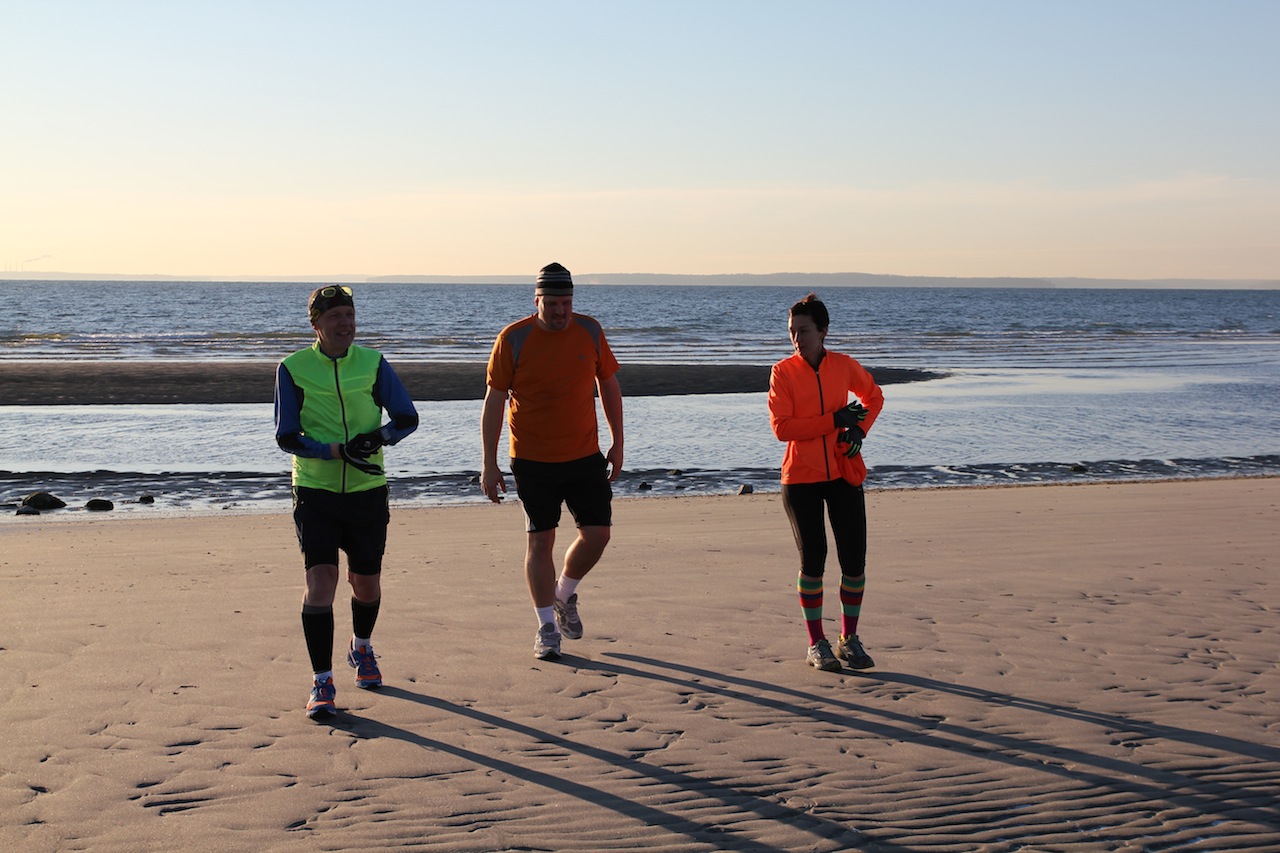 On my penultimate day, I was woken at 7am by a phone call. “Oh no, have I woken you?” It was Phil Parry of Spinnaker, who I’ve met a couple of times now. And suddenly I remembered suggesting we go run together at 7am. I had forgotten, entirely, and I hadn’t even been drinking. But I was down and ready by 7:05, and off we went again, up to Selleck Street, along Fairfield Avenue, down to Shore Road, and all the way to the shore. Like Roger, Phil is a tippy-toe forefoot runner and they both make me feel quite clod-hopper. I intend to lighten my shoes, but not until the marathon. Like me, Phil was astonished at the beauty of the beach, which seems a thousand miles away from the stuffy hotel. On the way back we decided to stop for breakfast in a scruffy sandwich shop on a scruffy street. It looked like nothing much, but it said “hot coffee” in the window, so we went in. The man behind the counter wasn’t particularly effusive, but I said something about us being hungry runners, and suddenly woop: it all changed. He’s done four marathons, and one day he decided to do a marathon in Iceland, just like that. He gave us training tips, and told us about Icelandic marathons, and made me the best toasted bagel with cream-cheese I’ve had for years. A great running encounter with the man behind the counter.

I flew back to the UK and had no sleep on the flight. The next day I was minimally functional and with no thought of exercise. But yesterday I ran 20 miles with Janey along the canal. Same plan as before: I ran from Keighley, she met me at Saltaire. It was a changeable day of weather, and I got wet but it didn’t matter. I felt OK. Not as good as at the Hull 20, but not bad. My legs were tired, my hip began to ache, but I could run through all of it. Poor Janey was feeling “bleeurgh” when she set off, and stayed feeling vaguely nauseous, but still not only managed to run 13 miles but looked like she was as perky and sprightly after 13 miles as she had been when we set off.

So that’s it for long runs. I think it’s hilarious that only two years ago I was still stuck on treadmills and not running more than 5K, and now although I have a 16 mile run to do this weekend, I don’t think it’s a long run.

I found two magazines and two race numbers from London Marathon when I got home. I don’t know why. But I read the magazine, and considered the state of my hip (tolerable), and thought: I’m ready. And I’m excited. 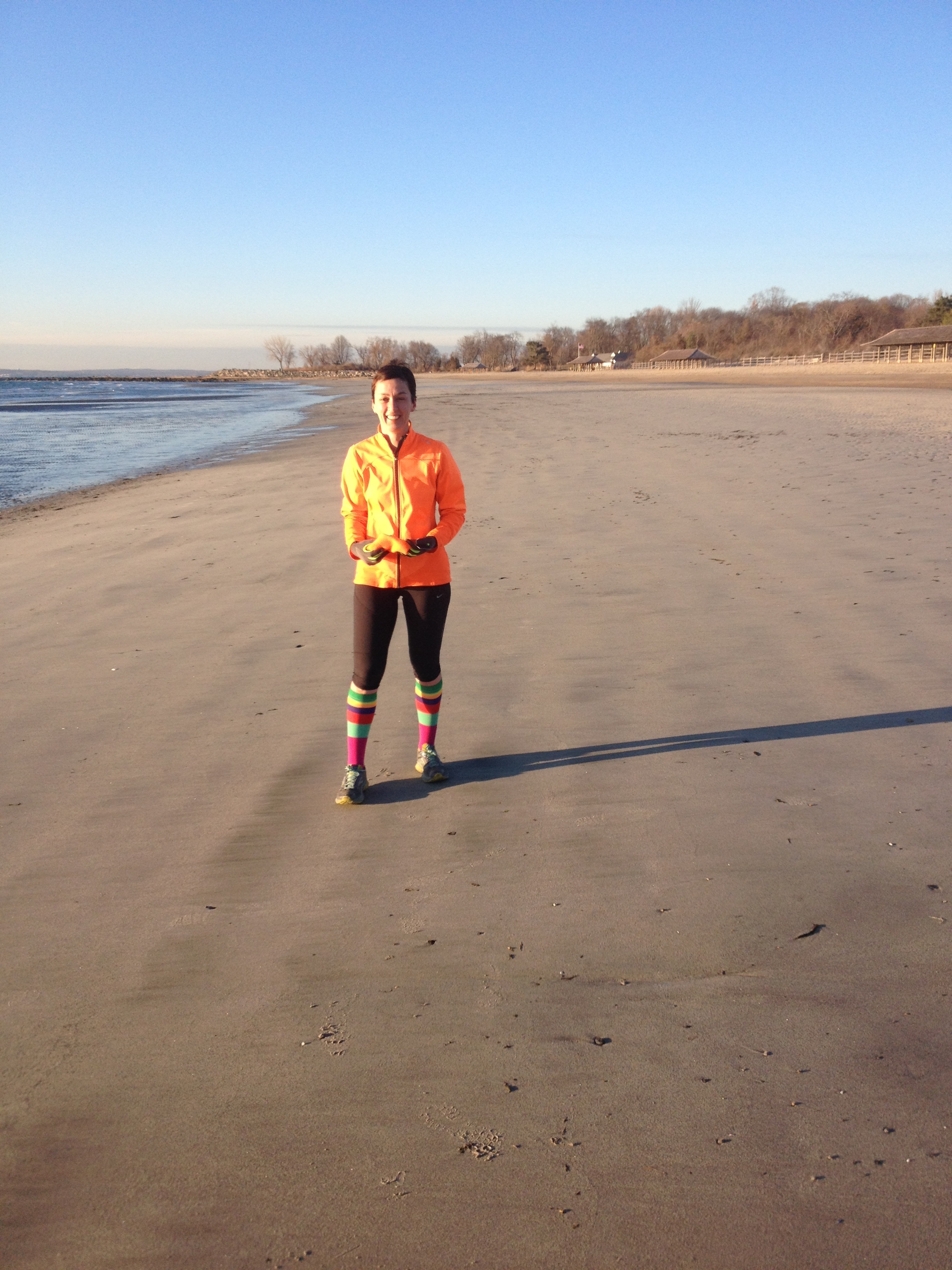 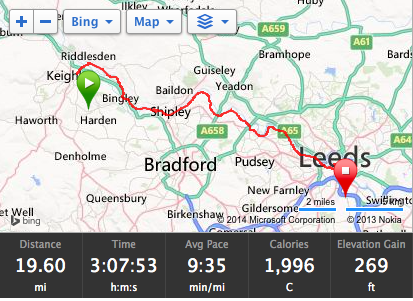 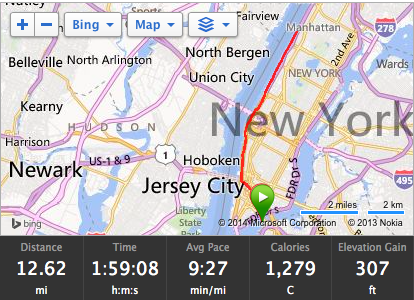