I have not been writing but I have been training. I’m slightly diverting from my marathon plan but only in when I run: so my Monday 10 miles has been put off until this morning and then at 7am I knew I was going to put it off again until tomorrow, which means running Friday, Saturday (at the English Cross-Country championships), then getting 17 miles done somehow on Sunday. I realised at club training last night, where I bored poor Marion with my running clinic and injury geekery for about five miles, that although I’m only running three times a week, I’m still doing 35 miles.

So, I need to look after my feet. I currently have two black toenails and two thickened toenails, but other than that, my feet are fine. They are fine because my shoes are great, and my shoes are great because they are Brooks.

I got my first pair of Brooks a few years ago at Up and Running. I went in there with no preference. I think I wasn’t even running 5Ks at that point. They felt the most immediately comfortable. And though I’ve had injuries, I don’t think my shoes had anything to do with them, and I’ve never seen a reason to run in anything but Brooks. (Except for cross-country mud and bogs, for which the tractor treads of Inov8 are unsurpassable.) I run in Brooks Ghost 6, and I have a pair of Brooks Ravenna which I bought when I was misdiagnosed with a tendon problem and thought I needed support shoes (and to their credit, the Sweatshop staff tried to persuade me not to buy them), and my trail shoes are Brooks Cascadia. I also have a pair of Brooks racing flats but haven’t run in them for a while. Why do I like Brooks? Because they fit. Because they are comfortable and giving but supportive. Because I’ve never had a reason to switch.

So when I heard about the scheme that Brooks was running called Try it On, I signed up. They were lending a pair of shoes from their Pure range, for a week. I can’t remember my thought process when I chose which shoe, but I can’t have been thinking straight, because I chose the Pure Drift. I am scared of minimalist shoes, since my hip injury happened when I ran in more minimalist racing flats. So when I got them out of the box, I was puzzled. They looked a) gorgeous 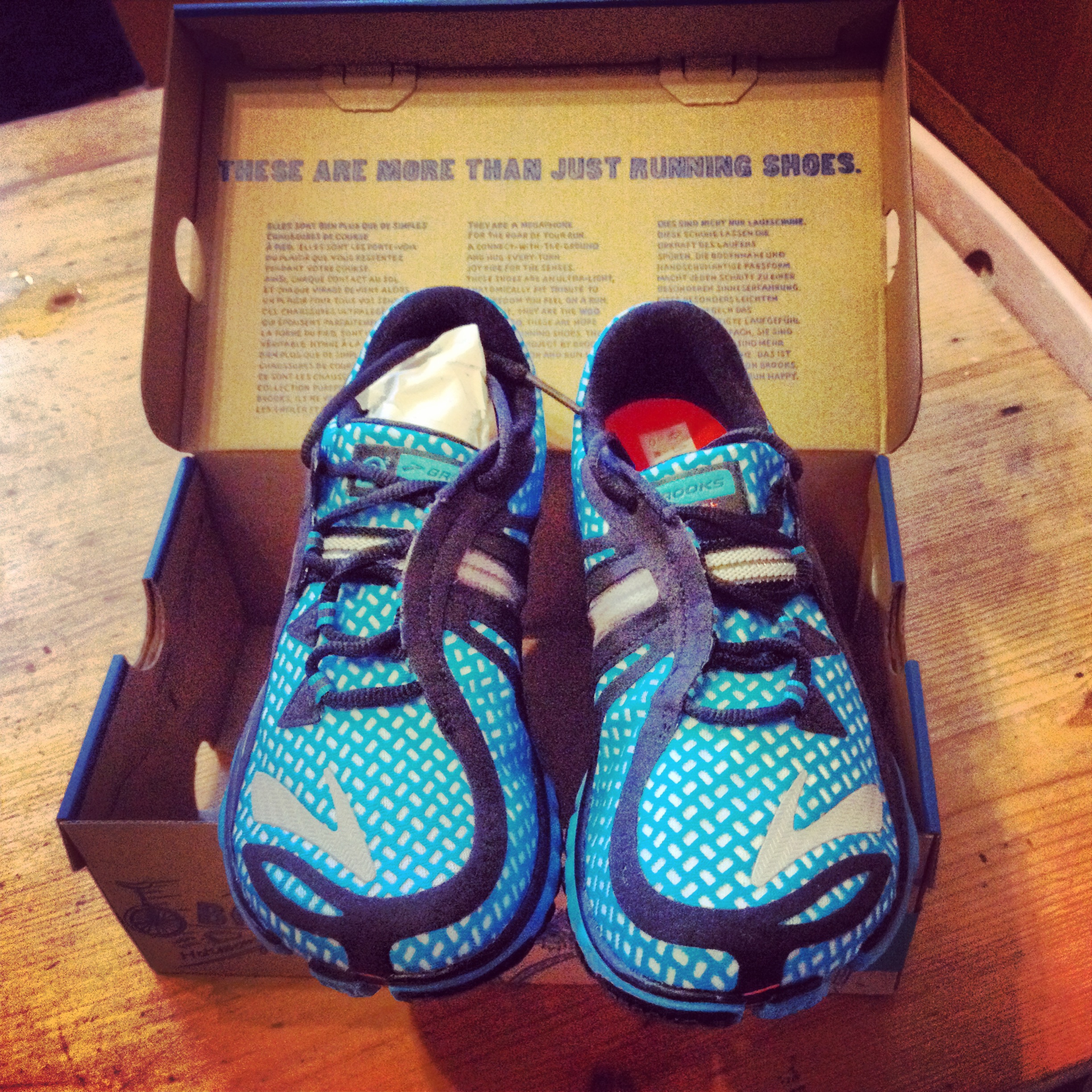 but b) extremely low to the ground (it’s called a heel drop in shoe geekery) and flat. I looked them up and saw they were the most minimalist shoe in the whole range. That worried me. Minimalist shoes require months of transition. They’re fine for tippy-toe ninjas who run lightly with a forefoot strike, like Gemma or Alan “Bambi” Brydon, one of our fastest club runners. But I heel strike. And I have an ongoing ankle problem. I need some cushioning between my feet and hard ground.

Still, I ran in them. I put in my orthotic inserts, and I ran in them for 8 miles, mostly on road, but with some trail too. I got them very muddy. 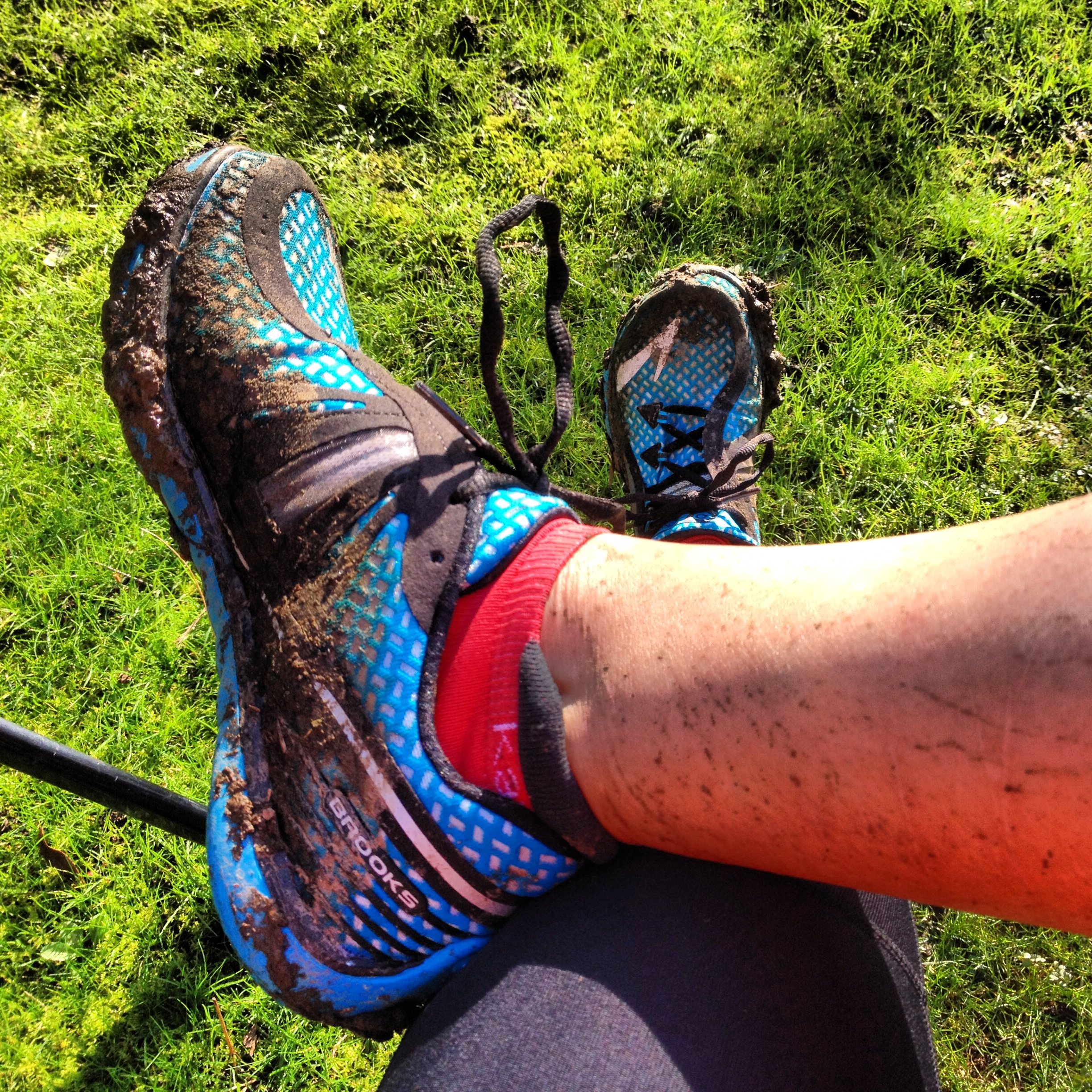 And I didn’t hate them. But I didn’t love them. I didn’t get injured, and they got me round 8 miles, but I didn’t like the impact on my feet. It felt like my feet were slapping against the ground. And afterwards, all sorts of muscles I don’t normally use ached, and I was very tired. That’s a good thing and not a complaint but it all added up to me not loving them.

I didn’t run in them again, because I was doing a cross-country and then my long run, and I didn’t want to risk them on a 15 mile run. So I took them back to the shop and waited my turn for a while, as a man had arrived just before me, also returning his borrowed Brooks. The Brooks rep, a young man called Chris, apologised when he got to me, but I didn’t mind: it had taken time because he was extremely assiduous and thorough, which was fine by me. He was also impressively calm when I opened the box to show the state of the shoes. I apologised. I should have rinsed them, at least, but I hoped to use them again and then didn’t. I told him the truth: I didn’t get on with them. And he said he understood, and that other people had also mistakenly chosen the Drift without realising quite how minimalist it was. He asked if they should put an alert on the website when people pick the Pure Drift, asking, “are you sure you want a shoe this minimalist?”

Yes. Good idea. Chris was knowledgeable, charming and introduced me to new terms in shoe design that even I, with my vast geekery, didn’t know: a caterpillar? Shoe DNA? He said I was right not to take them on my long run, and he wouldn’t do long mileage in them. We both agreed I should have picked the Pure Connect instead, as it has more cushioning. I wish I had. Chris gave me my voucher for £25 on the Pure range, and suggested I consider using Pure Connect for my shorter faster runs and stick with my Ghost for long runs and the marathon, as that’s what he does.

Agreed. Except I can’t thoil another pair of shoes at the moment. And I’m going to the US where they are cheaper. And I think I need to replace the Ghost if I’m doing 35 miles a week and going to be up to 40. But if I do buy another pair of shoes, even though I didn’t get on with the Try it On, they will still be Brooks.

I asked what would happen to my muddy shoes. Would they end up being sold at races, as Sweatshop does with their returned shoes? No, said Chris. They will be distributed to the community. He was looking into donating them to a young people’s beginners’ group. Lucky them.