In 1988, I arrived at Somerville College, the University of Oxford, with great trepidation. I knew I wanted to be at Oxford. But I’d applied in my A-level year to St. Edmund’s Hall and been rejected (not surprising when I later learned that it was not particularly northern, very male, and very into rugby). I decided to re-apply on the strength of interview and my A-levels and got into Somerville. My first year hall of residence was called Vaughan, something that was astonishing, as it was a) my unusual third name which no-one can ever spell right and b) it was spelled right. I don’t have a wonderful memory so I don’t recall it exactly but I know that by the end of that first day, as a scared fresher, I had made three friends. Nathalie, a frank-speaking Geordie studying history; Charlotte, a posh (I thought) blonde doing zoology, and Louise, a tall and somewhat intimidatingly beautiful lass, from Yorkshire like me, also studying French, though I was doing French and Italian, and she had stuck with German. (I abandoned German after A-level because after four years of studying it, it sounded ugly to me, so I chose the prettiest language I could think of, however useless in diplomatic terms Italian is). We have been friends ever since. We shared a house together in our second year, on Marlborough Road. We lived next door to a group of American lads who were a) Catholic b) studying at an odd Catholic college for a year and c) hilarious. I fell in love with one of them, Ted. Lou became great friends with Brian, a loud Californian who was like no-one I’d met before. We spent the year shopping for affordable food, with Lou in charge of the budget: No, Rose, you can’t have the expensive cheese, and then eating it. I remember Lou’s veggie bakes and Brian’s gnocchi – pronounced gnowwwwki – and a lot of fun.

We all stayed in touch, though we moved all over the world. We didn’t always phone or write, but that didn’t seem to matter. Then Louise got sick. She had a benign tumour in her leg which was later diagnosed as cancerous. It was a rare tumour. Later – and inside that later are so many diagnoses, appointments, hope and disappointment as it kept coming back – it metastasised. She lost her leg, bit by bit. Throughout it all she was wonderful. She must have been in increasing pain, but she didn’t complain. She stayed out late when we visited, although she must have been exhausted. Still she didn’t complain. She protected her friends. After Lou received a terminal diagnosis, on 21 December 2012, she and her husband Al started a blog. Lou was asked to participate in a photographic project by Rankin, which became a show at the Walker Gallery called Alive in the Face of Death. She did, and she loved it. She made it to the opening of Rankin’s show, although her prognosis shouldn’t have allowed her to, because she was determined to do so, and she looked beautiful. But she was exhausted although once again she didn’t complain. She died three days later at her mother’s house, with Al by her side. She was 42.

Why is this on a running blog? Because a month after running the London marathon, I’ll run the Edinburgh half marathon for one of Lou’s chosen charities, the SCAT Bone Cancer Trust. Dodgy acronym, noble cause. There are about 15 of us running for TeamLOU already, including Lou’s husband Al (if he ever gets off his bike and starts running instead of thinking about it), friends from Edinburgh, Rugby, Leeds, people who knew her in person and people who came to know her through her blog. So please, if you can spare any money, donate on our fundraising page here. 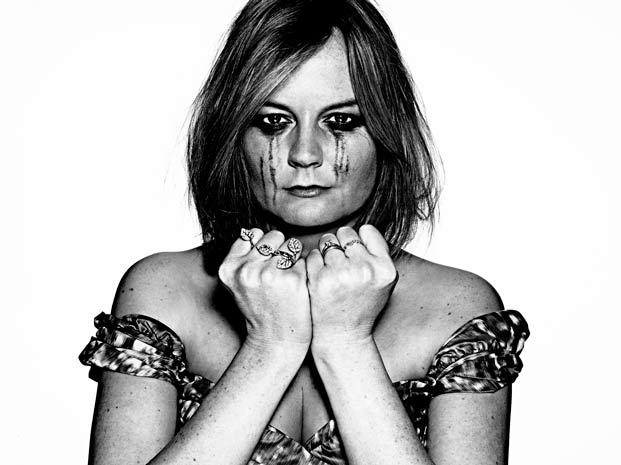