My friend Gemma looked at me, puzzled. “You’re doing the Yorkshire marathon, again? Why?” I thought for a bit. “Because I’ve got a free place and it’s half an hour up the road.” Also, last year it was so foggy, this year I’m hoping to see the scenery. Also, unless I can run through safari parks in Uganda or raise thousands for Sierra Leone, a road marathon is a road marathon, up to a point. I ran the London marathon but was most delighted by my achievement, not the scenery. Perhaps that’s cynical. But I don’t see anything odd in running Yorkshire again, though I’ve no desire to do London again for a long time. We were talking about marathons because we have a friend who does foreign ones frequently. But they are so expensive. New York: probably £1000, once you’ve paid for flights and a week’s accommodation. I’m paying the petrol up to York and back. I’m so delighted to be in shape to run a marathon – potentially – that I don’t really care where it is.

On Thursday I got a missed-you card from the postie. I dashed down to the post office hoping it was my replacement orthotics and it was. I left the post office with a big grin on my face. FRB and I were planning a long run the next day so they had arrived with perfect timing. And Brooks had extremely generously sent me some replacement Pure Flows, my chosen marathon shoe, so despite Brussels Airlines still being unable to locate my bag, I’m ready. Or at least my equipment is ready.

FRB is training for Loch Ness marathon in a couple of weeks. But after running Ben Nevis last week, he wanted something flat. He turned down my suggested route of Eccup, Harewood and round about: too many hills. His quads and calves would go on strike. Instead, we decided on the Leeds-Liverpool canal, me to do 15 miles and him 15 or more, and after various logistical possibilities – two cars, one left at Kirkstall; or a car left in central Leeds then a train to Bingley – we separately made our way to Bingley and set off north towards Skipton. FRB bombed off, with a plan to do 7.5, turn back, do more on the way back then join me for the last four. I didn’t understand that even before running 15 miles so I just let him go and assumed I’d see him again at some point. The canal was lovely. It had rained heavily all morning, but now the skies cleared and turned blue, and the sun shone. I’d dug out my earphones and intended to listen to some podcasts. I haven’t listened to podcasts or music for ages, and usually I like to run without. But this, I expected, would feel long, and it would feel difficult, so I needed the help. First, Ruth Rogers on Desert Island Discs but I didn’t like her, so she was soon switched off. Then the New Yorker fiction podcast, which I love. I chose this Patricia Highsmith story and it was captivating. But it was still a shock when I looked at my watch, thinking I’d done about five miles, and I’d only done three. What do you do then? You sigh, pull yourself together, and keep going.

There were lots of stops for gels, and fruit, and to adjust things. I saw FRB running back; he checked I was OK, I checked he was OK, then we headed off northwards and southwards. He said, “I ran to the bridge with the stop sign on it.” At least I think he said that. But all the bridges I saw had stop signs on them. I think my Garmin dropped out for a bit, but I had nothing else to rely on to guess my distance – the mile markers saying Liverpool was 115 miles away weren’t much help – so I kept going. I saw beautiful gardens dropping down to the canal, with terraces filled with plants; I saw lovely weeping willows inclining themselves into the water from the bank; and people having an outdoor party behind a huge England flag. I saw many canal boats sailing along, and people inside reading books in narrow cabins. I saw people walking, now the rain had gone: families, and friends, and a group of Asian women in glorious bright salwar kameez, just as I was thinking, “why don’t I see more Asians walking on the canal?”. I ran on, and on, past swans and geese and ducks, all in abundance, past the still, green water and the humans and animals who were enjoying it. At a bridge with a stop sign, past Silsden, my watch said 7.5 miles, so I stopped and ate dried fruit, and a family walked past, coming from the farm behind and heading for the footpath, carrying fishing nets and I didn’t know where I was but it didn’t matter. I set off back, and the day was so beautiful, and the scenery so lovely – green canal, green fields, sheep – I put my earphones away and just listened to the world.

My shoes were great and the orthotics were definitely helping. I could tell I was getting another blister but I think that’s because I was running through puddles and my socks had got wet. A word about my relationship with Brooks here: they have sent me a few pairs of free shoes, but never with any obligation. If I didn’t like them, I’d say so. I’ve abandoned my Brooks Pure Connect, despite having three pairs, for example, because they’re not for me (though I bought those). I love the Pure Grit, though they are slippery in mud. I genuinely think Brooks make great shoes, and the overwhelming reason I think that is that I can put on a pair straight out of the box, run fifteen miles in them and feel like I’ve been running in them for months. They feel like slippers – airy slippers – from the first minute, and that has yet to change. So I’ll trumpet about Brooks shoes because I think they’re a bloody good product. That said, Brooks, I wish you’d design women’s shorts with better pockets, along with nearly every other sportswear/shoes company. My running skirt has three pockets, including one that fits an iPhone, but none of my shorts have anything but small ones that hold a gel, maybe, but not much more.

The only trouble on this run was my lungs. I’ve had a cough for four weeks now. It began as a sore throat, then became a dry, tickling cough that kept me awake, and now my lungs are full of phlegm. So the pastoral peace of the canal was often interrupted by me stopping and hacking my lungs up, then spitting like a person who has smoked for forty years. I think it’s getting better, and I know it’s not a good idea to run when there’s trouble in your lungs, but I’m so delighted to be fit again, unless it gets worse, I’m going to run through it and phlegm be damned. FRB caught me up again, looking a bit worried. “Did you go further than you thought?” No, I just took longer to do it. Actually, I probably had gone further because when my watch got to 15 miles, we were still a mile short of where the cars were parked. Still, I did it, though I was too tired to do my habitual “this is the longest I’ve run” jump.

I do have a marathon training plan, but it has long since been abandoned. So now I’m winging it. I’m running when I want to, never two days in a row, and getting in a long run every week. This weekend I’ll be running the Vale of York half, and plan to get there early and add an extra five miles. My tendon was sore after the 15 miles, but we stopped for a drink in the pub – after we’d changed soggy, muddy clothes – and I asked for a glass of ice, put it in a carrier bag and iced my foot for the duration of a lager shandy, and that helped. FRB said that when he first crossed me on the canal, my hips had been noticeably rotating, which isn’t good, and means I need to stabilise my pelvis and get back to my glute exercises. But he said that later my form was much better, and I was clearly focusing on moving my arms properly, which seemed to align me.

I’m writing this while I’m walking on my office treadmill. 3.3 miles so far today. I’m hoping that’s helping. Meanwhile I’m extremely happy to have run so far – the furthest I’ve run since I abandoned marathon training in March – and for my tendon to be coping. Onwards. 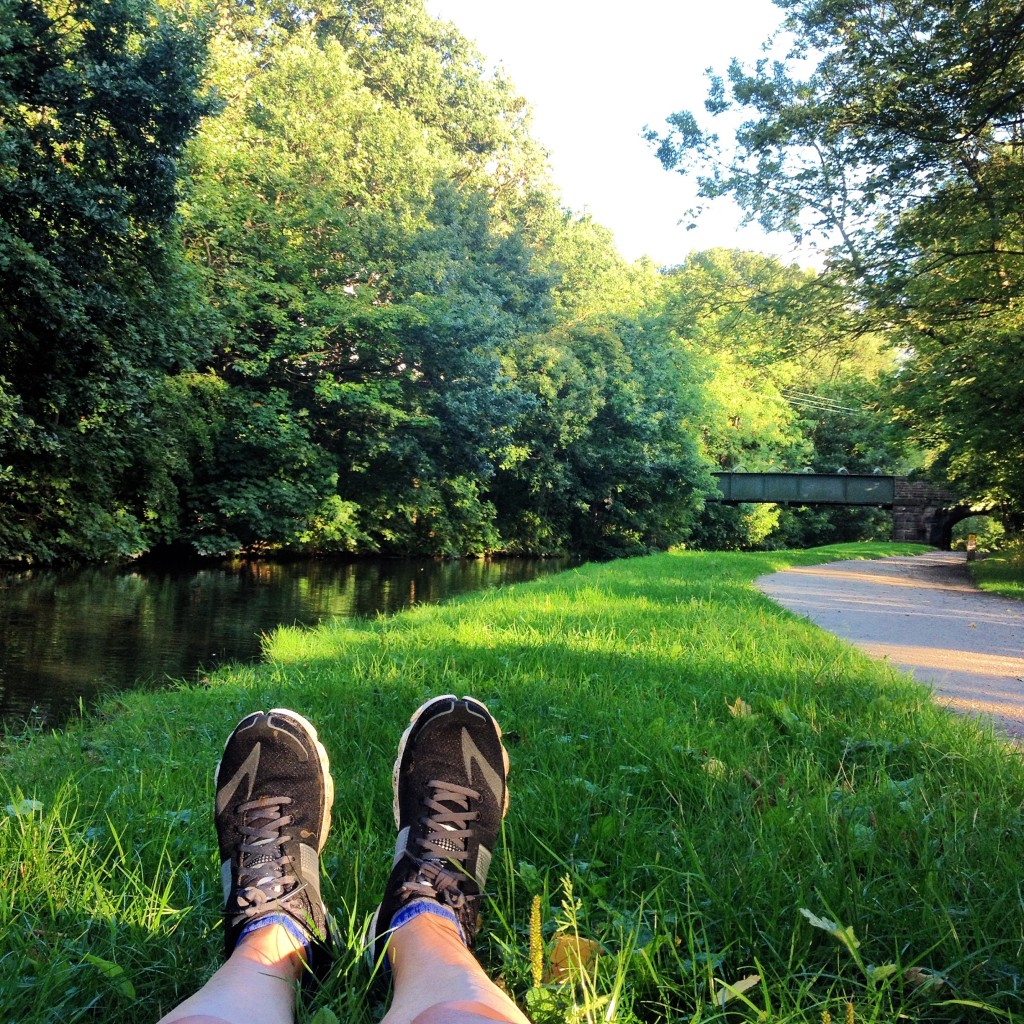