My marathon training plan is designed to avoid injury and niggle. But I do have niggles. Here is what’s going on so far:

Spot the connection. My right side has always been problematic. I started running in 2010, and my first problem was the ankle. I went to my GP, then to a podiatrist. I was told I had “frozen feet” and that some of my smaller foot bones may have fused together. He gave me orthotic inserts, I ran with those, I stayed away from the racing flat shoes that I thought had given me the problem in the first place (along with the camber of Woodhouse Moor), and the pain went away. Then it was my knee. Then it was my hip. I went back to the GP. I had a scan. I was referred to a physio, who said my muscles were extremely tight and did acupuncture to release them. It was surprisingly powerful. He told me there was nothing wrong with my feet, that they flexed normally, and gave me exercises to do which I promised to do and didn’t.

Along the way I did six sessions with Teri of Pure Running in Harrogate. Teri thought, and the physio thought, that my problems were due to not having enough core strength, and having an unstable pelvis that sagged down to the right when I got tired, putting pressure on my ITB, and hip, and knee, and probably ankle. I tried to change my form, I got less and less hip pain while running, so I stopped seeing the physio and I stopped seeing Teri. I got stronger by doing my PT and other strength sessions but I knew that my right side was the danger zone. Last year I saw Tom Hughes of Trimechanics, and we worked on my form again. It’s the same principle: stand taller, get my pelvis over my stride, stop my right foot kicking out, which it does when I’m tired. (My mate Elliot called it my Dick Emery kick.)

Tom gave me exercises, and I did them sometimes but not enough. Meanwhile, I took to the hills. On the hills, my hip is fine. But the ankle pain is back. On the weekend, I was in Scotland, near Edinburgh. I had to do a long run at some point, and I’d looked on the map and seen this magnificent patch of green space. Perfect! 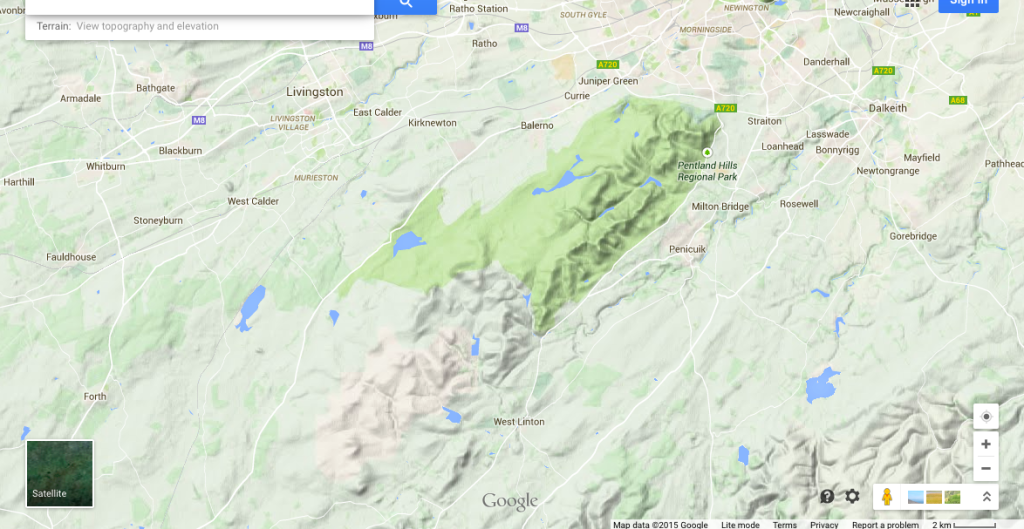 Then I saw the word “law” a few times. I knew that from going to North Berwick that a law is a hill. Then the words “Pentland Hills.” Then a map with contours. They are high. And I was not going to do my long run while climbing 1,000 feet. So, back to the map. Maybe a road? But they didn’t have pavements, or they were busy or dangerous. We were staying at a country house with 20 or so people, and my Fell-Running Boyfriend (FRB)’s dad, also a runner, looked on the map and saw a dismantled railway line. I looked it up. The Dalkeith-Penicuik walkway. 9 miles long. Perfect.

I went to the website. The Dalkeith-Penicuik walkway is closed between Bonnyrigg and Dalkeith while Borders Railway does renovations. That cut about 4 miles off. Damn. Still, it was the best option. FRB was supposed to be having a rest day, but he decided to come along, so we set off. The railway path ran right in front of the house. We turned left, first, towards Bonnyrigg. The view wasn’t the nicest – Bonnyrigg was a mining town and it’s not been prettified since – but the walkway was flat, although it was tarmac, which I didn’t much like. There were lots of people out with dogs. I’ve never minded dogs while running. I like dogs, and I’ve never had any problem with them. FRB is more circumspect. He thinks dogs should be held or kept on leads on narrow pathways such as the walkway. One dog jumped up at us, and persisted, while his owner, a nice enough woman, kept saying the usual Dog-Owner’s Mantra: “he’s very friendly. He’s only playing.” Yes, but he’s only playing while jumping up at me, and do you know how often runners hear that? We went on, and the walkway did indeed end at the far side of Bonnyrigg, beyond the nicely preserved old station: 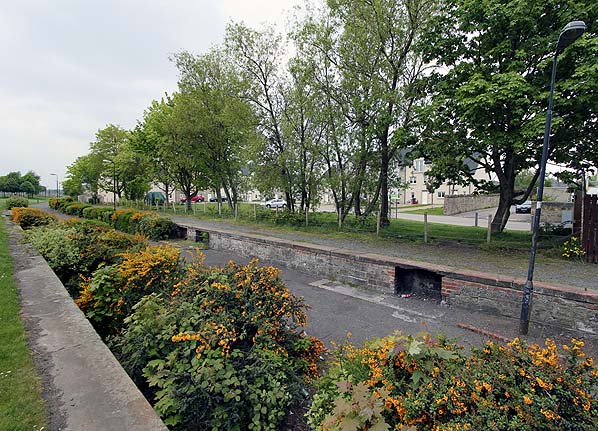 And this is how it used to look: 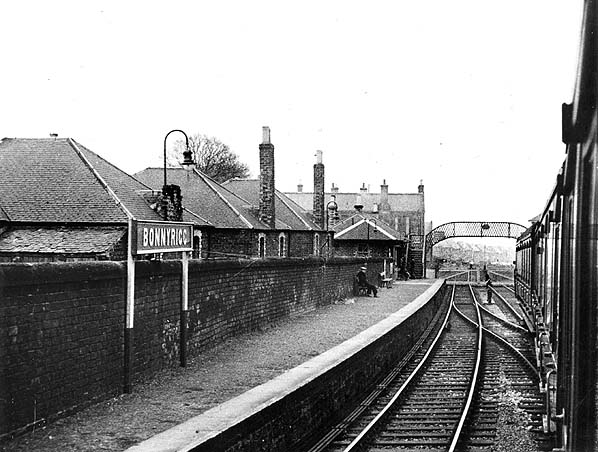 On we went, and the further we got, the prettier it got. On the right as we ran were the magnificent Pentland Hills, looking steep and stunning. 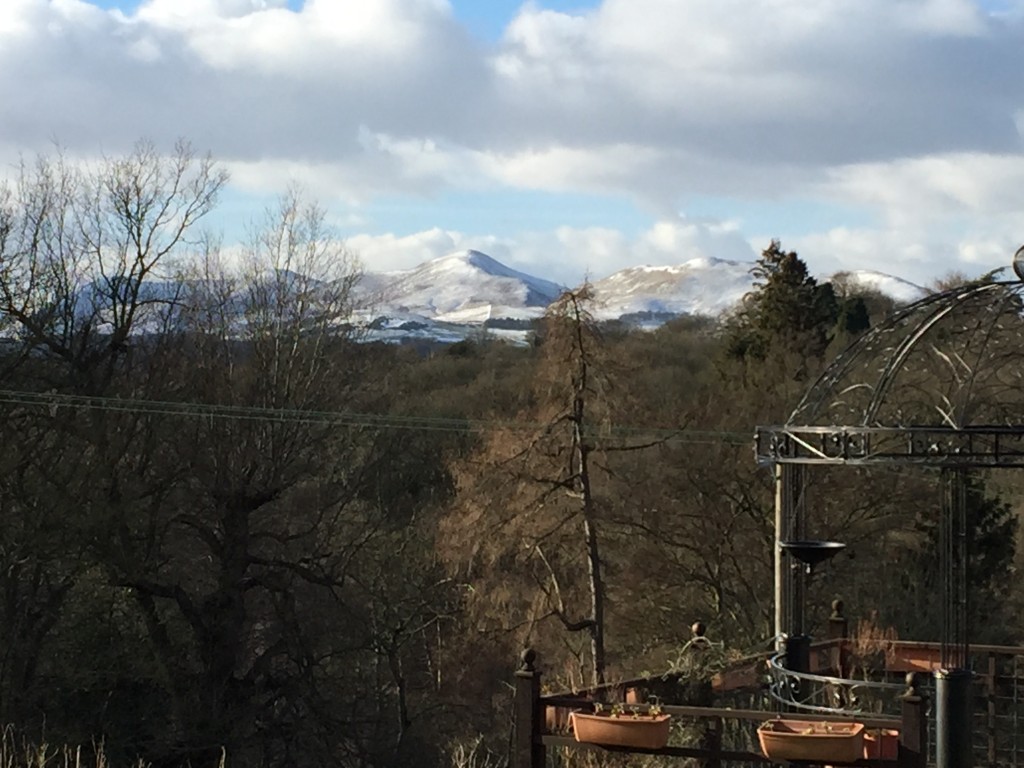 The path turned to shale and gravel, and was nicer underfoot except for the ice. FRB and I had made different decisions about footwear: I was in my Pure Connects, i.e. minimalist road, and he was in his Inov-8s. Neither was perfect, but both were OK. We ran all the way to Penicuik, through tunnels and along escarpments and a beck, into a housing estate, then turned around and came back.

Then I got bitten by a dog.

We’d seen a surprising number of Alsatians on the route, along with some thug dogs and some nice collies and Yorkies. I can’t remember what this dog was, but I think some sort of Alsatian cross-breed. His owner was a woman. The dog approached FRB first, as he was running ahead, but didn’t do anything. FRB always stops when a dog approaches and waits for the owner to get the dog under control. I stopped too, but the dog came up to me and jumped and bit me. FRB thinks I was clawed, but I remembered its mouth opening and the teeth. It punctured my thigh. Not badly, but the skin was broken. I was shocked. I hadn’t expected it to happen. I don’t think the owner realised it had bitten me, and neither of us told her, though I wish we had. We ran on, and I got angrier and angrier. I was angry not so much at the dog, nor at the owner who couldn’t control it, but that I would now probably be nervous of dogs, when I hadn’t been before. Dog-owners: CONTROL THEM. At least keep a hold of them when runners pass. I love dogs, but even the nicest natured dog can turn. We can never know what a trigger can be: a smell, a colour, a movement. Please hold them. I know that runners coming up behind dogs and people is an issue, and I am trying to perfect the best way of doing this without spooking them. Shouting from afar makes people jump. Saying “excuse me” when getting close makes people jump too. If I cough, I’m not heard, and I can’t depend on them hearing my footfall, because the noise of running feet changes according to weather and terrain. But I’m working on it. I may borrow my cat’s bell collar. She’d be glad to be rid of it.

There were no more incidents, and after four miles I’d calmed down. We did 14.5 miles, which was enough in icy conditions, and got back to the house to find the wood-burning stove going, and eggs and morning rolls (excellent Scottish baps) ready to be gobbled.

The next day FRB and his dad wanted to run up the Pentlands. And so did I. I dressed for height and hill, as well as an actual temperature of about zero which would feel like five degrees colder with wind-chill. I put on capris, knee-length socks, a vest, fleece-lined running top and a jacket. With, of course, hat and gloves. We parked at the foot of one of the laws and set off. No warm up: that’s for jessies. The path was ice and snow. We all had Inov-8s on, and except for the sheet icy bits, the Inov-8s were great.

The first ascent was steep. Near its end, FRB’s dad said to me: That’s the toughest bit done. And I believed him. Now I know that father and son are adept at not telling the truth about how many hills there are, and I will never believe either of them again. There were two or three more climbs. But actually the lie helped, because each climb was a surprise, and I just got on with it. Another thing that helped me: that FRB told me the day before he thought I could be a good fell-runner. He said I had strong legs and could be a good hill-climber. I remembered this, as my legs started screaming on yet another climb, and I kept going. Praise is a powerful thing.

Some of my climb was walking. Probably a lot of it was walking. My ankle began to get sore, and then it went from a faint ache to a loud ache and then to actual pain. But I kept going. And it wore off on the downhills.

We got to the first top and it was so very beautiful but so very very cold and windy. FRB’s dad was in shorts and two T-shirt layers. He was colder than either of us, so we kept going after taking some very fast pictures. 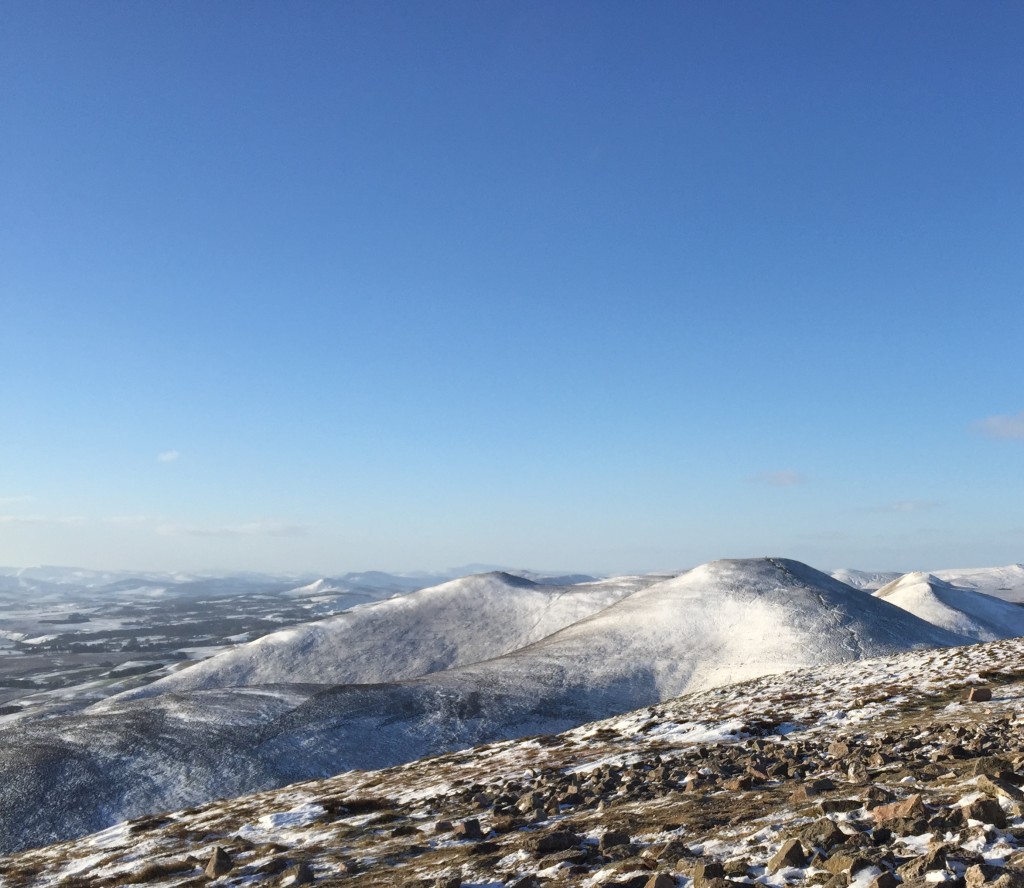 I realise now that this how my fell-running brain works:
On the up: “I can’t do this, I never want to do this again, it hurts.”
At the top and on the downhills: “I love this, I can’t imagine never wanting to do this, I want to do it again.”

We encountered half a dozen other runners, some of whom gazed at FRB’s dad’s shorts with some wonder, as he was the skimpiest dressed of all. It’s the Carnethy Five, a classic hill race, next week, and I guess they were doing recces. We dashed downhill through snow and got to the reservoirs. Then it was two or three miles along tarmac to the car park, which was fun in fell-shoes. The sun was out, and it was beautiful. 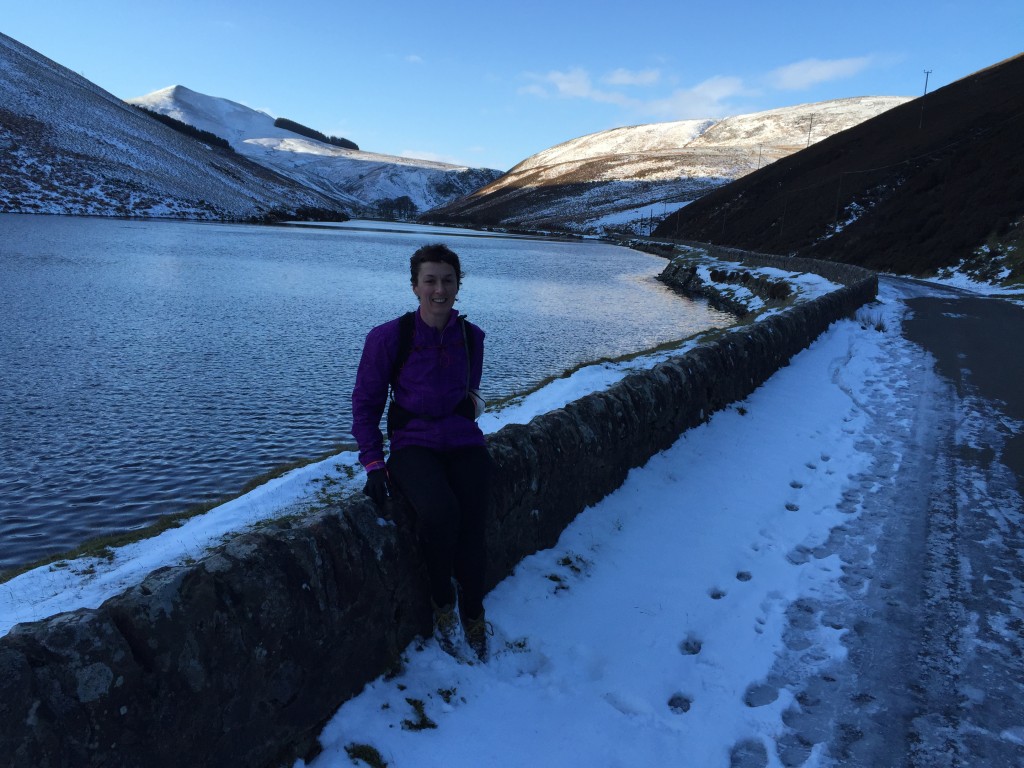 Now, I just have to figure out how to do a 23-mile moors race this weekend without my ankle complaining too much. Along with the rest of my constitution.