My orthotics arrived. I was told they would take up to a month, but if I paid £20, I could get them in four days. Weird. I paid £20. Here they are: 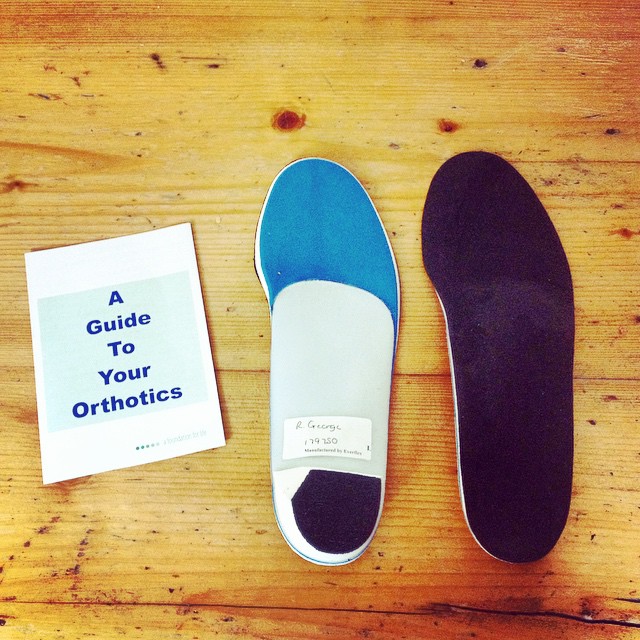 The important bit is carbon fibre; not sure about the upper but as Karen said I could trim it with scissors, I guess it’s not expensive. They have a lifetime guarantee. I was given strict instructions about wearing them in: one hour on the first day, then two and so on. But they were so comfortable I wore them for a couple of hours yesterday, had a break, then walked home – two miles uphill – in them. No problems. The only time my tendon complained yesterday was when I lugged four big sacks of horse-manure home from the allotment for my neighbour. As I was hefting them into my car boot, I had a few thoughts:

My other instructions from Lucy the physio are to wear them in properly before trying to run. The orthotics leaflet I was given has dark warnings about ruining everything by being too hasty. So I am not going to run today. I may not run tomorrow. But by the end of the bank holiday I will.

I posted a picture of the orthotics on Facebook, and on Twitter. Both times, someone said, oh I don’t agree with orthotics. Both times I thought: then keep it to yourself. I am aware of the debate around orthotics. Anyone who believes in barefoot, chi or minimalist running thinks they are the devil’s spawn, in sole form. Christopher McDougall doesn’t like them. Someone who is my Facebook friend but who I don’t know in person, said, “as a physio, I don’t like them.” To which FRB responded, “as a physio he should know that what works for him doesn’t work for everyone.” I get that the ideal state would be to get my body into a biomechanical state of nirvana where everything works smoothly. I understand that a crutch is only a crutch: your leg still needs to get better. And that is how I am going to use my orthotics, as a crutch until my feet get stronger. The Facebook friend said, changing your biomechanics and your neural programming is how to overcome injury. No shit. I responded very sharply to him because I was annoyed: I am doing everything I can: rest, rehab, physio, neural reprogramming, glute exercises, calf stretches everywhere (including in any queue or wherever I have to wait for more than a minute, which means many car drivers look at me oddly). Orthotics are not a solution, but they will take me towards a solution.

In other news, I tried to swim today. I tried three days ago and was told that our membership had run out. I tried yesterday but my bike got a puncture just as I was leaving the house, and I switched bags but didn’t transfer my swimming kit. But I’d done a couple of seven minute workouts in the morning so I was allowed not to, in my head. Today I tried again. I was late out of the house (because I am lazy in the mornings and because I had to check my inner tube for punctures again), and knew the pool was having school swimming lessons at 11. Great: I can get there for 10 and have a quiet hour. No-one will be there at 10: people who work are at work.

But in my rush to get to the pool in time, I had picked up my bike lock and not my goggles. Idiot. I’ve done that in the past and asked the pool attendants if there are any goggles in lost property I can borrow. It’s worked before. This time though: “No, we throw them away because they can cause eye infections.” Really? So I had a decision: no swim or hairdresser’s swim.

What is a hairdresser’s swim? It’s the breaststroke done by women who don’t want to get their hair wet. Head above water, duck legs below.

I decided on the hairdresser’s swim. It’s not ideal, because it’s much harder to keep your body from sagging down to the floor. But it would be better than nothing at all. Even though the pool was crowded. There were baby swimming lessons in half the pool, which was sweet and lovely to see. There’s not much more joyous than seeing a toddler laugh uproariously at a splash of water. The rest of the pool was divided into two lanes. The supposed fast lane was populated first by a couple of front crawlers, and a very slow breaststroker then by two men walking up and down it. I don’t know: don’t people know about lanes? I was clearly grumpy and needed to swim. The middle lane had some breast-strokers, so I joined that one. Then the slow woman in the fast lane moved over and started backstroking quite badly – ie. splashing arms going horizontally not vertically – in the middle lane. Oh dear. I know: I encourage anyone to be fit and swim. Just not when I’m already in a grump because I’ve forgotten my goggles.

But I’m supposed to have got over my dislike of crowded public pools. Even in crowded pools I can always get a workout. And it’s hard to be grouchy to the sound of giggling children. So I had a sharp word with myself, did a few lengths, then lurked in the deep end of the aqua-tots lane and did some aqua running. Which is bloody hard. Of course I’d forgotten my special aqua-running belt: why would I actually remember something I need? But it worked. I worked out, enough to get tired. The backstroking woman was still backstroking horizontally when I got out, and I thought, good for her. And I meant it. 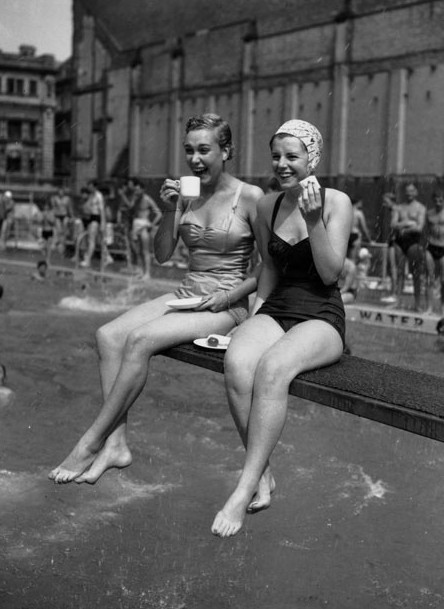 Photo from My Vintage London