I didn’t run during the bank holiday. Nor the day after. Partly that was because I was going to a funeral, but as I was only supposed to do a 15 minute run, I could have fit it in. The truth is, I was scared. I have been so hopeful that I will be able to run again soon, that I’m scared about the slump I’ll get if it turns out I can’t. So I let the days go past and I didn’t run. My tendon has been making itself known: a niggle here, a bit of soreness and tenderness there. My right inner ankle is significantly more swollen than my left but I’m wondering if that’s just how it’s going to be from now on. But I know that there is still damage, or at least problems, because when I press on the nerve, it screams at me, and that’s why I was scared to run. Lucy the phsyio was, admittedly, very pleased with my progress. She kept grinning. Even so, when I compare my inner ankles by touch, I’m worried.

I had a day of no pain yesterday, and so I decided to run. I’d talked to FRB about The First Run Back. I’d decided it would be in early morning sunshine, at about 6.30am, and it would be around Roundhay Lake. He offered to run it with me. But in the end, I didn’t tell him I’d decided to run. Nor did I go to Roundhay Lake. In the end, I decided to get up, run out of the door, and keep going. On my own. No fanfare, no planned First Run Back. I laid out my running kit the night before, and even that felt odd. I dusted off my Garmin, which has had barely any use for two months. I put my orthotics into my Ghost shoes, as they are the most cushioned, set the alarm for 6.30, and set off at 8 (because of a) a snuggling cat and b) being asleep). I was nervous. I did my hip-opening exercises, I warmed up a bit. The sun was shining, people were walking dogs in the park, and off I ran. Down to Gledhow Valley woods, through the wild garlic and nettle patches, along the walkway beside the brook. There was hardly anyone about beyond a couple of dog-walkers. Good morning, I said, to all, because there was sunlight in the trees, and the smell of green, and because of the simple joy of being outside in fresh air and moving along at a pace.

It wasn’t much of a pace. Lucy’s instructions had been: try a fifteen minute jog. And she meant a jog. Then wait for a day and see how your tendon feels, then try another one. So I jogged at 9.30 minute mile pace. It still felt like a sprint. I’ve not done as perfectly as I wanted to in my rehab fitness: I should have done much more swimming and aqua-running and yoga and Pilates, and I’ve had more rest days than I should have. But I’ve done some strength training and yoga and swimming, and that’s better than nothing. Even so, my fitness has diminished. If I do get to start running properly again, it’s going to hurt. I ran to the lake, a seven-minute run, and it was tiring. I sat down on a bench for a bit, feeling unfit, and then I ran back. My ankle was fine, except for one tiny needling alert, but I said out loud “NO YOU DON’T” and it went away. Rose’s Patented Rehab Therapy: shout at your injury, like a lunatic.

Up to Chapel Allerton park, where I stretched, though I’d only run 1.5 miles, then did my glute rehab exercises, which were made more entertaining by the odd dog running up and sticking a nose in my face.

It felt wonderful. But now, I wait. 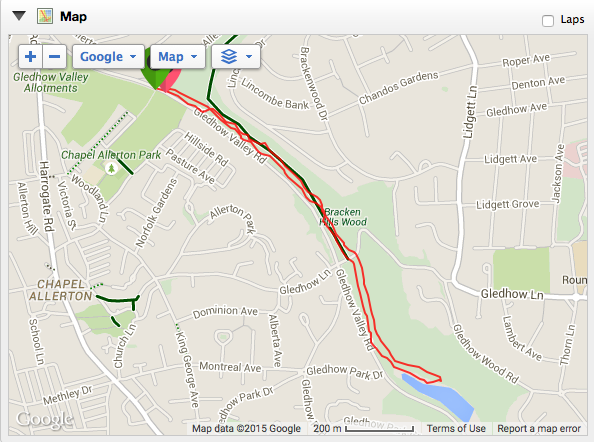