It’s been a godawful few weeks. First, the fall down the stairs and the burned hand, which led me to wearing a Michael Jackson glove at Widdop. But Widdop was wonderful and it felt so good to be back exercising. The next day, I was cycling home on my usual commute, a 2.5 mile uphill from the centre of Leeds. Some of it has a bike path but only about a third. In Chapeltown, there is a stretch of road which narrows. I’ve had a problem there before, when my bike hit a deep drain and the tyre punctured. It happened again, only this time was worse. My tyre punctured, but it was a violent jerk, and I was thrown into the road, into the path of oncoming traffic. I don’t remember much about it, apart from lying in the road, somewhat stunned, and seeing cars had stopped behind me, and thinking, I’d better get out of the road, quick. I did. A young woman had been walking past and stopped to ask if I was alright. Then another man, in a smart suit, came running up. I began to think that the accident must have been dramatic. I was very shocked and shaken, but thought that nothing was broken. I had no idea if I’d hit my head, but later checked my helmet and there was no sign of damage so I don’t think I did. I stayed there for a few minutes, telling my helpers that I was OK, and another man came up, looking as shaken as I felt. He had been driving the car immediately behind me, the one that had stopped, and had pulled in further up the road to see if I was OK. What a lovely man. He said, “you just went flying into the road.” He offered me a lift home, but I thought that as everything seemed to be working, I could walk the mile home. This, in retrospect, was probably stupid, as I was very shocked and trying not to cry all the way. I thought it was best to keep busy, so I went to Tesco to get doughnuts, because I thought I deserved them, and to the pharmacist to get more burn plasters, then I went home and made myself some hot, sweet tea. The next morning, my knee gave way when I put weight on it, and I had a huge bruise on the leg, but otherwise I thought I’d got off lightly. I could so very easily be dead, as my head could easily have gone under the wheels of a car, or I could have hit the bonnet. I just happened to be extremely lucky that no car was passing at that exact point.

I was wrong about getting off lightly though. After 24 hours my ribs started to hurt. Then they started to be agonizing. And they didn’t stop being agonizing for two weeks. I’ve never bruised or cracked my ribs before but oh my god, they hurt. I now have a deep appreciation of what the rib cage does, because it hurt to do ANYTHING. Twisting, turning, lying, sitting, breathing: anything. I spent two weeks taking strong painkillers. The thought of running, again, was horrifying. I couldn’t even walk without pain. Meanwhile, as I’ve just started taking citalopram for depression, I was nauseous and drowsy from the medication. Then last week my eyeballs started itching and I got infections in both eyes.

I began to forget what it feels like to be well. I felt exhausted and ill. And I’d forgotten about being an ill person, when you can’t remember how you were ever healthy.

But slowly things have got better. I’m writing this post today because it’s the first day I’ve felt well in about three weeks. I’m not nauseous. My ribs don’t hurt to do everything. Sometimes, I even forget they hurt. They were so pain-free yesterday, I did a little run to the chip shop. They are slightly sore again today but nothing serious. My eyes are clearing up too, and it’s not a sudden onset allergy to my cat, which would have been devastating. I’m not going to start running again yet. And I’m going to try to stop having accidents. But soon I will start marathon training, gingerly.

I wore this t-shirt today to celebrate my first day of health. Nothing bad can happen to me if I’m wearing this: 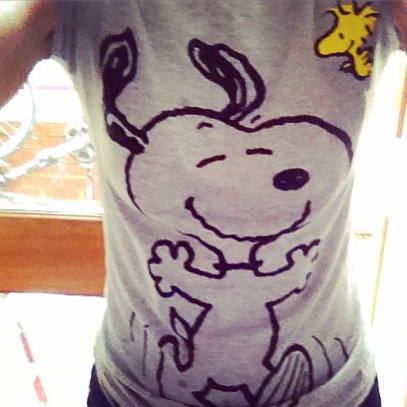