Sometimes I like to run alone. Sometimes I like to run in groups. Tonight I knew that I was tired from my pathetic efforts yesterday, and I thought if left to my own devices I would find reasons all day not to run until it was too late. So I told my friend Jayne, who is half of the wonderful Veggie Runners, that I’d like to come along to her weekly Monday social run. It’s called the Wharf Chambers run because it meets at Wharf Chambers, a members co-operative bar/cafe/venue that I love very much because it’s warm, cheap and – given yesterday’s resolution – it sells a non-alcoholic beer called Drive. Also it has a table football table. And it only costs £1 a year to be a member. And tonight it had about eight people in tight and highly visible running clothing. I was the first there, because my plan says 8 miles, so I did a first three-mile run up into Harehills, along a road that Jayne and I, having once run down it, call Vegetable Street (or maybe only I call it that) because it is ethnic grocery after grocery. It’s an ethnically mixed area, and I suspect it’s where a lot of young male immigrants end up being housed while they wait for their families to join them, because each grocery has at least one lingering outside doing not much. In daylight, some sometimes make comments, but in darkness they’re all just obstacles to get round, along with people walking home, cars who don’t see you, roadworks, and every other thing that an inner city pavement can throw at a running person.

For the Wharf Chambers runners run, we began on the canal, then went off-piste through car parks, then up the fiendish Clarendon Road hill, which I had only ever once before run up without stopping. Peer pressure and fear of embarrassment is great for endurance. Then along my old route down Servia Hill, through Little London, where I was once running when a man stopped dead in front of me and took my photograph, along past the Arena, down Briggate “for a bit of glamour” (I’m not sure why I said that, as it was not likely to be found on a cold Monday night), then back. It was fun. Running sociably is always fun. The map below isn’t accurate because I forgot to start my watch again. But it’s near enough. 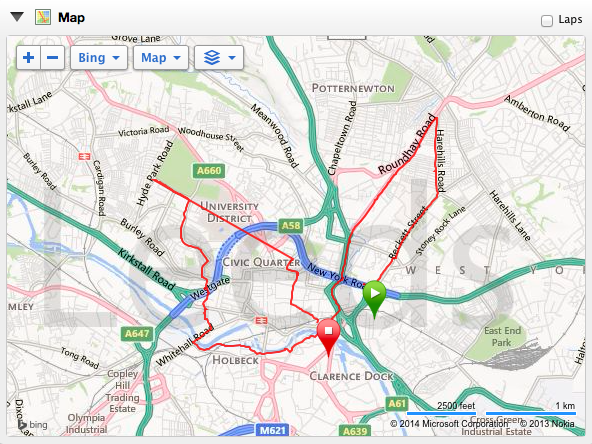