People have been asking me if I’ve recovered from the marathon. Yes, I have. Last week we had our club Chairman’s Chase race. It’s a very-nearly-10K handicapped race around Leeds. That means hills. I had no particular ambition for it, nor any target. But I ended up flying around the course. I remember feeling as I’d felt in the marathon: strong and fast. Even on the hills. I was expecting to be overtaken any minute, but no-one overtook me until the last mile, and even then it was only two speedy runners, Niamh and someone else. I knew that Paul and Chris had been setting off behind me, and they are both usually slightly faster than me, but they never caught me. Afterwards, Paul came up and said, you were flying, I was trying to catch you but I just couldn’t. I did the very-nearly-10K (it’s about 300 metres off 10K) in 49:07, which is not far from my best ever 10K time of 48:34, done at the Humber Bridge 10K a couple of years ago. I’ll be running the Humber Bridge again this year, with my brother. I was going to try and beat that PB, though I’ve no idea how I managed to get it in the first place, but now I’ve signed up for a steep fell race the day before, so speed ambitions have been sacrificed to mud.

Anyway that was last week. Speedy Rose. Magic legs. And last night at training, 7 days later, it was like I had been invaded by slugs. My legs belonged to slugs. My energy belonged to slugs. From the first mile, I knew something was wrong. I had no force. It was a serious effort just to lift my legs. It was much worse on uphills. I couldn’t understand it. We were running my favourite training route: up through woodland, more woodland, some roads, more woods. I hadn’t eaten anything different. I hadn’t particularly focused on eating carbohydrates, but I’d eaten properly. I’d slept fine. I wasn’t hungover. But from being uncatchable last week, I was suddenly the last of all 20 of us, and I couldn’t go any faster. Paul and Chris, who couldn’t reach me last week, were half a mile ahead. I was mystified. Afterwards, I was so exhausted that I went straight home and had to lie down. And then I remembered.

I’d been due to give blood a few weeks before the Marathon but read somewhere that that wasn’t sensible. So I’d postponed until now. I got there with the usual expectations of being turned away. The last time was because I was dehydrated and my veins were too small. They had got me into the donating chair – it’s probably called a venepuncturist cot or something – and tried to get a needle in. After several attempts, they tried a paediatric needle, which is smaller. But nothing had worked. So this time, I was very hydrated because I was determined to succeed. I went through the usual questioning: where have you been and is it malarial? The Blood Service is much stricter than other NHS departments. I’d gone to Bangladesh and Nepal in September and checked whether I’d needed malarial prophylaxes, and the NHS website told me I didn’t, because neither Dhaka nor Kathmandu nor western Nepal hill country was considered malarial. But the Blood Service thinks all Bangladesh and all Nepal is risky. I was still allowed to give blood because six months had passed, and because the acupuncture I’d had – another flag – was done by an NHS physio. By the time I got to the chairs in the donating area, I felt like I’d survived an interrogation by my headteacher.

You’ll feel a nip, said the venepuncturist. I liked the fact that she said “nip,” as I’ve never understood why nurses always say “you’ll feel a sharp scratch,” when the insertion of a needle feels nothing like. It didn’t feel like a nip either, but it was painful enough for me to make a noise. She wasn’t particularly apologetic except to say, “the needles we have to use are quite big.” But the insertion point is still sore two days on, so I conclude that the needle is big, but that she was also uncommonly heavy-puncturing.

Never mind. My blood started streaming out into the bag, and I kept squeezing the ball, and it kept streaming. I was pleased. I’m normal! My veins aren’t too small! I find giving blood so soothing. I know some people can’t bear the sight of it, and that they are horrified at the thought of watching their blood pour out. But I watched the collection bag being rocked side to side on its rocking device, and I felt calm. That blood had just been pumping around my body quite healthily. It looked strong and rich.

I gave my pint, and went for tea and snacks. Thank goodness for mint Club biscuits. I stayed 10 minutes and then walked about a mile to do some errands. When I got back to my studio, I knelt down to get something from the fridge and suddenly felt extremely weak and dizzy. I know you are not supposed to exercise when you’ve given blood, nor lift anything heavy with the arm you’ve used. So after that I took it easy for the rest of the day. But no-one said I couldn’t exercise at all, nor that giving blood would affect my energy levels for more than the day of donation.

But it does. Powerfully. So after that awful run, I started to research. I knew that the donation – 470mls – was about 13% of my blood supply. I learned that red blood cells should replenish very fast, as millions are created and dying every second. White cells and platelets are also replenished quickly. But red cells aren’t immediately replenished, and the red cells carry haemoglobin, which carries oxygen around the body. When I ran seven miles last night, I discovered on this fascinating Marathon Talk podcast about running and giving blood, I was running with 10% less oxygen capacity, because my haemoglobin and iron levels – haemoglobin contains iron – are still low. It was like training at altitude.

It can take from four to 12 weeks for haemoglobin levels to get back to normal. That’s quite shocking. So I looked into what I can do to help my haemoglobin. If I weren’t vegetarian, I’d be eating liver three times a day. But I am vegetarian, and there is as far as I know no iron-rich vegetarian liver. I’m slightly disadvantaged because plant-based iron isn’t as easily absorbed as meat iron, and women need 14mg of iron a day. Also only 10% of any iron ingested is absorbed by the body.

But there are things I can do. I can eat good iron-based plant sources:
Chickpeas
Lentils
Tofu
Seeds
Leafy green vegetables

I can drink orange juice with my food as Vitamin C aids iron absorption. I can cut down on caffeine as that doesn’t help. So that is my diet for the next few weeks. Luckily, that was my diet already, apart from the caffeine-reduction. Luckily, I’m not running the Leeds half-marathon this weekend but cheering from the crowd and I can just about manage that, even though I had to sit down after walking half a mile today.

So, I have learned a few things.
1. I never want to train at altitude if it feels like it did last night.
2. I will continue to give blood when I can but never in the week of an important race.
3. The next time I give blood, I will not run 7 miles the next day, but take it easy.

In conclusion: I don’t want to sound negative about giving blood. I’m not. Only 4% of the UK population are donors and that’s rubbish. I’m reading a book about blood at the moment, and the history of blood donation is astonishing. Please give blood: it’s easy and a wonderful thing to do, and you get as many mint Club biscuits as you can eat, afterwards. But runners should time it right, that’s all.

(As for the images below: they were called Artery and were part of an NHS campaign to increase blood donations before the Olympics. I’m not convinced it would have worked.) 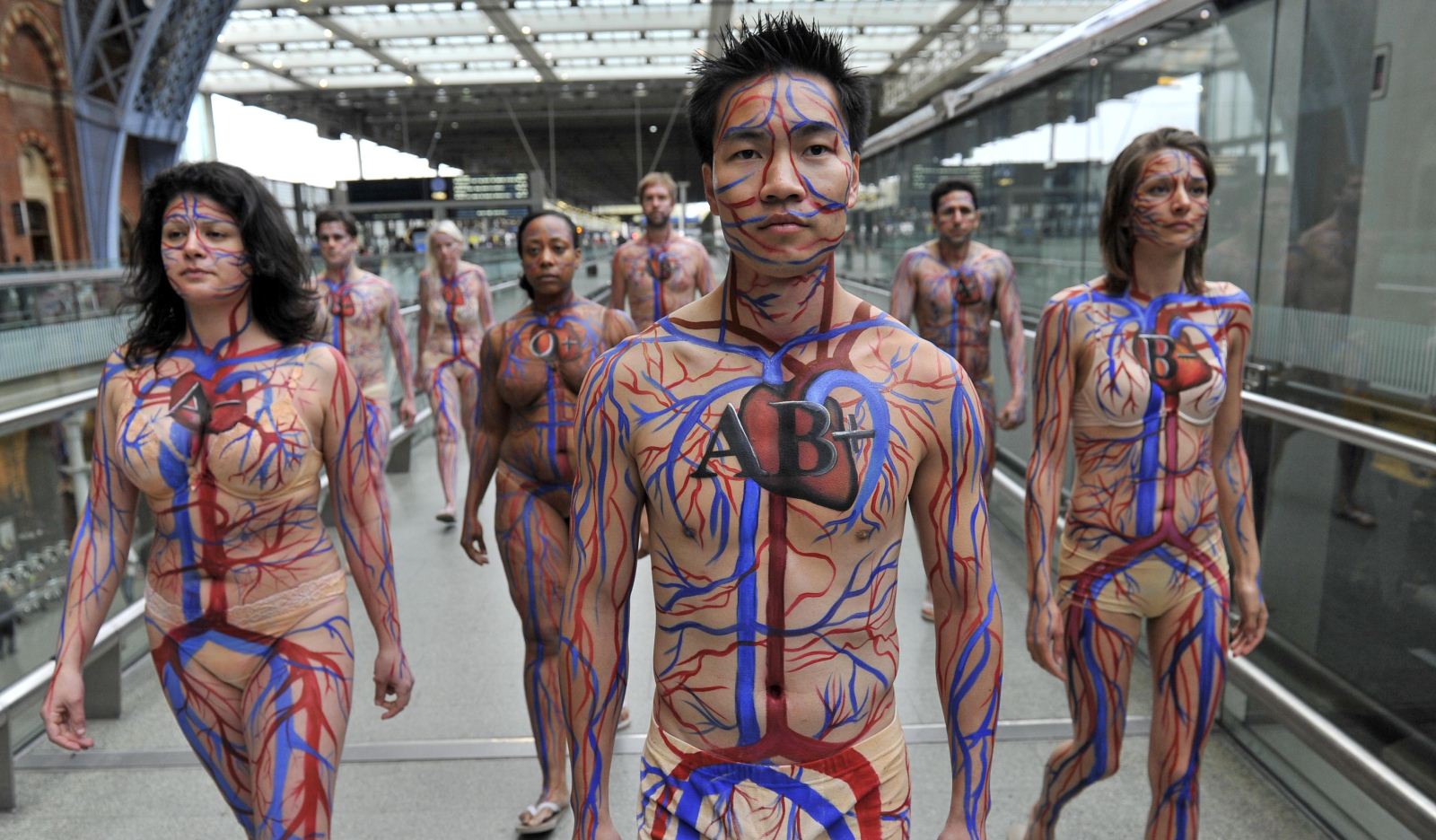 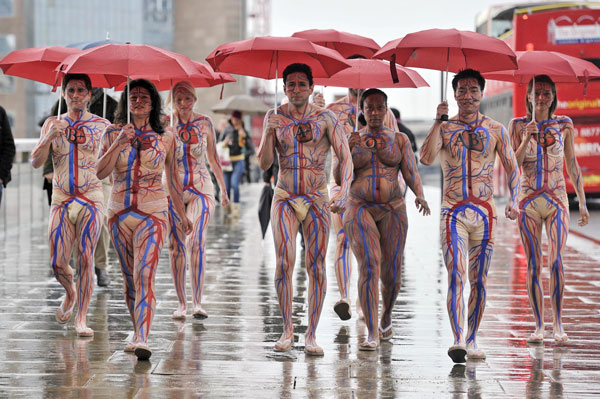