I’m stubborn. If someone thinks I’ll struggle to do something, then I will work harder to prove them wrong. I know that some people – good friends who I respect – think I’ll struggle to meet the cut-offs for the Three Peaks. And I know they are right, for now. But by the time April 30 comes around, I am determined they will be wrong. So even though I’ve been struggling with awful menopausal mood lows, I’m still training. Like yesterday: it was awful. I couldn’t function. I couldn’t think straight. I wanted to weep. I knew the depression was caused by my hormones, because I recognise that kind. I’ve had practice. But even so, I left my studio at 2pm and started running. It wasn’t scenic, as I was running up Meanwood Road, a road that is as grim as Meanwood woods are lovely. My training programme required me to do long hills, namely two slogs up Stonegate Road, another road that’s part of the Leeds half marathon route, a race I have never done and am still not tempted to do. By running from my studio (uphill) rather than from home (downhill), I’d added another long hill. I kept going, through Meanwood, past Waitrose, up and up. A man in a woolly hat turned round when he heard me coming and said, “it’s tough this hill. Go steady!” I thanked him and carried on going steady, up and up, until I could turn and run downhill again, through children leaving school, and oblivious parents. I had my usual thoughts of, I wonder what these burqa-clad women think of me in running tights, but then I was past them and who cares anyway.

My plan didn’t require me to go all the way to the bottom of the hill, namely the steep section on which I’ve watched plenty of Leeds half runners struggle and swear. But I did, and I ran whatever mileage it was, all the way to the top. Then, for good luck, and because I felt good, I ran up an even steeper hill on my way home. I was proud of myself, because I’d felt so bad, and now I felt slightly less bad.

I was proud of myself at the weekend too, when I did Ilkley Moor fell race. I hadn’t really given much thought to this, beyond thinking that it was short and not too steep. I didn’t account for the weather and the deviousness of the route planners. The day before, the Met Office told me it would be raining constantly. I don’t mind that. But that there would be gusts of 57mph too. Oh.

FRB wasn’t racing but was going to do his own training run on the moor. He set off, and I sat in the car watching the rain falling and the trees bending. Even so, it was mild and I ran in a long-sleeve top and vest. For the first mile, I thought: this is easy. A stupid and fatalistic thing to think, because then we climbed to the tops. And I nearly fell over. I’ve never been blown off a path before, but I was (thank you to the runner who pulled me back). The wind was brutally strong. It was hard to run through, but I did my best. I’d been given instructions by FRB to keep his team-mate Andrew in sight, which isn’t difficult as Andrew is 6 and a half feet tall and wears a bandana. I did, then overtook him about halfway round, on a descent. People were nervously picking their way down, but I don’t do that. I activate the inner six-year-old who fell out of trees and ran away and was energetic and fearless, and off I go. Of course I fell a few times. My shin hit a rock and hurt, but I carried on, because you do. But FRB popped up a couple of times to cheer me on (and everyone else: he’s a very good supporter). As for the deviousness of the route: it was designed to have as many climbs as possible. Every time I thought we were descending for good, we were going up again.

I finished, in 72 minutes something (I thought it was 73.01 but the official results gave me a few milliseconds more), and thought, those are some of the hardest conditions I’ve ever run in. And they were. A fellow fell-runner commented later that he didn’t think it was brutal, just “testing.” He wasn’t being critical, just pointing out that hard races are the valuable ones. The hard races are what will get me up those peaks.

Here I am realising that 1. it’s over and 2. Soon I will be having hot tea. 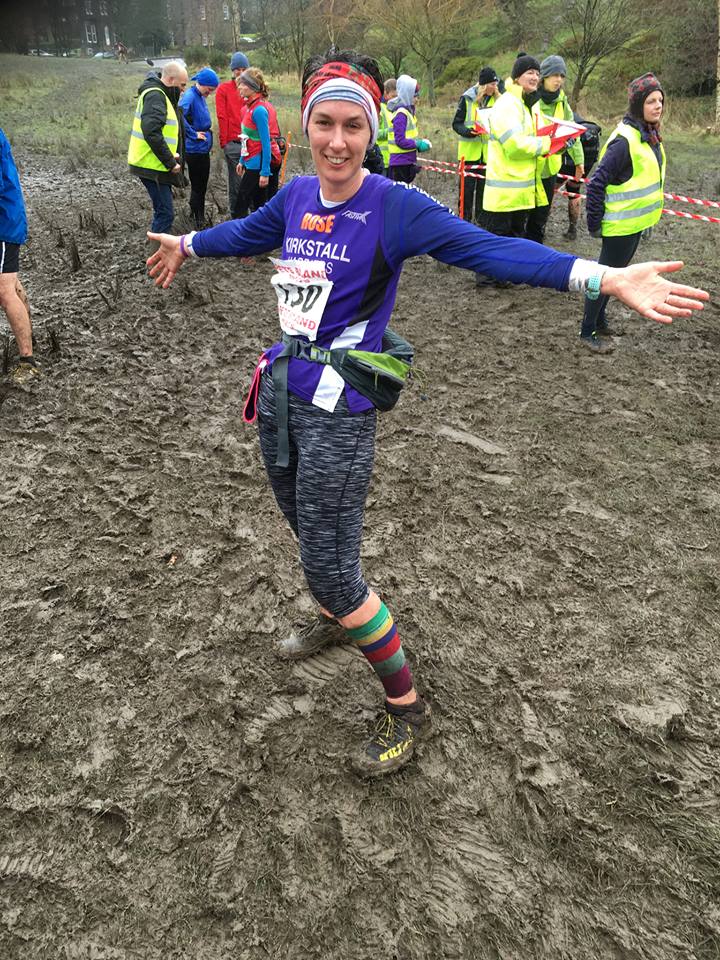