I can’t remember ever hating running before. I have hated it while running, but that doesn’t count. But I have never thought back on a run and shuddered. Now I can do that. Now I am thinking back on last night’s run and shuddering.

Last week’s long run was meant to have been 17 miles but I hadn’t done them. I was supposed to run them on Sunday and didn’t because I didn’t get up early enough, I was tired, and I was at a family lunch that was also family tea and family evening drink in the local. There was no running. But I really want to stick to my marathon plan so I thought I could sneak in the 17 miles on Monday and then do another long run much later in the week, so I could be on track for running the East Hull 20, a 20 mile race (obviously) in East Hull (obviously). I had a deadline to finish and told myself I would get to my studio early and the run would be my reward for finishing it. That did happen. I sent it to my editor at 3.30pm, and by 4.30 I was standing outside my house holding my watch hopefully to the sky as usual, trying for a satellite. I had procrastinated during the deadline by planning a route with my usual gb.mapometer.com, which is brilliant because it automatically follows roads. A small pleasure. I also checked what time sunset was going to be, here. I spent ages trying to devise a perfect 17km loop, and finally decided to run up Harrogate Road, down to the reservoir, along Eccup Moor Road, then up Eccup Lane. Then I would run along Otley Road, and down Harrogate Road from Harewood. I checked with Google Maps whether Eccup Lane had pavements as I haven’t been up it before. It didn’t, but I didn’t think it would be too busy and it would still be light. I assumed Otley Road and Harrogate Road, as they are two major roads, would have pavements, and I knew that I would hit Otley Road as it was getting dark so could then safely run down on major roads all the way home.

It was a good plan. What an idiot.

For the first 8 miles, the run was great. It wasn’t raining, it was getting dusk and I love twilight. There were a few walkers around the reservoir. I was listening to the New Yorker’s fiction podcast and a story by Joyce Carol Oates lasted several miles, and it was wonderful. By Eccup Lane I was listening to Jonathan Safran Foer reading Amos Oz’s The King of Norway, and I was content. There were a few cars, but I was in my neon orange hi-vis jacket, I ran into the direction of oncoming traffic, the darkening light was beautiful and even though there were no other runners around I felt safe and happy.

I reached the end of Eccup Lane.

I thought, it’s Otley Road, there must be pavements soon. I started walking on the verge. I didn’t want to run because it was tussocky and I was worried about going over on my ankle. I was nervous, because by now it was properly dark and the road seemed narrow, and the cars were fast. I thought, maybe I should run back up Eccup Lane, but by now it was too dark and I’d rather not run along a country lane on my own at night. Or, I calculated, I can keep walking to the junction with Harrogate Road and from there run back on pavements, a long straight run home. I knew from runs I’ve done along the Leeds Country Way nearby that there was a pavement on Harrogate Road up towards Harewood House’s main gate. I managed to cross the insanely busy rush hour traffic on Harrogate Road, by now listening to Italo Calvino, who I have always loved but will now always associate with a shitty terrifying run, and ran up to Harewood House.

Normally at Harewood House we would cut inside the grounds and run along the perimeter path down to Wike Lane, where we usually park. But no way was I going to run along a woodland path in the pitch black on my own with no torch. I decided to set off walking. I knew there was a pavement from the road off Harrogate Road towards Eccup reservoir and I didn’t think it was too far.

I was wrong. It’s actually making me shudder and faintly sick to write this because it was so horrible, and although Otley Road was bad, it was about get a lot worse. I couldn’t run because I couldn’t see. The verge was wide enough but it had branches and dips and ditches and clods. All I could do was keep walking. And walking. And walking. I don’t actually want to look up how far it was because I’d be too upset, but I think I walked for an hour. In the pitch black, into cars rushing past at 60 miles an hour, and it was endless. On and on and on. I was scared of the traffic. I was actually scared for my life. I was scared that I was walking along the perimeter wall of Harewood and what if someone came over from the woods on the other side? I couldn’t see them. I couldn’t see my feet in front of me. I was spooked. It honestly felt like a nightmare, or a scenario that someone has written. I didn’t know what to do.

I kept walking. I walked past two bus stops but they were on the other side of the road and it seemed extremely difficult to cross: the commuter traffic was constant. I made the decision not to try and cross and wait for a bus because I thought, it won’t be too long and then I can run and I can do my 17 miles. That was the wrong decision. It was long, and terrifying. And horrifying. I don’t use any of those words lightly. I felt trapped. By now there was no point going back because I had walked so far. It seemed like going forward, however scared I was, was the only option. So I did. I thought, it can’t be much further. It can’t get much worse.

And then it did get worse. After about 45 minutes which felt like 45 hours, the verge disappeared too. Suddenly I was on Harrogate Road with no pavement and no verge to walk on, in darkness, with no torch. I’d been using the torch on my iPhone, but the iPhone had died. Where the verge stopped, there were barriers. I stepped over them and had no idea what I was stepping into. I couldn’t see anything. I had to duck under road-signs. I fell a couple of times, I stumbled a lot. I remember getting tangled in some fence but by now I was so scared and so profoundly upset, I didn’t take any notice. I had no idea whether I was walking through junk or dead bodies or broken glass. By this point I was so distressed I could imagine anything. And it wasn’t over. I remember looking ahead at the road stretching uphill and thinking, oh god, oh god, when will I get to safety? All I could see was more dark terrifying road. I even thought of calling the police, but my phone was dead so I couldn’t phone anyone. I couldn’t see how to escape. I just kept saying to myself, it can’t last forever. It has to end.

The grounds of Harewood stopped and then there were fields. There was a farmhouse and I thought, shall I go and knock on the door and ask for help? But I knew I couldn’t be more than two miles from safety, and I felt stupid. I also didn’t think they’d answer the door. So I didn’t.

I decided to walk in the fields instead. I couldn’t see anything in the field I climbed into because I couldn’t see anything at all. There could have been bulls but at that point I barely cared. I had to climb through a vast pile of cattle shit to climb over the wall to get out and by that point I was almost crying with distress. And there, finally, was some pavement. I had reached the road to Eccup reservoir. And I ran home, as fast as I bloody could. Only when I got home did I realise that my leg was extremely sore, and saw this: 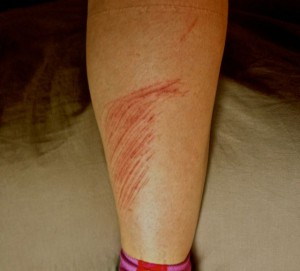 I’m guessing barbed wire. I put on some soft trousers and limped round to the corner shop. I’m off alcohol, mostly, while I’m marathon training but sod that. I bought a bottle of red wine and drank half of it. Fast.

I must have been passed by 300 or so cars on my long scared walk. No-one stopped to ask if I needed help. I suppose I can be thankful no kidnapper or rapist stopped either. I’ve travelled to many dangerous places: Iraq, Afghanistan, Kosovo. I am not known for exaggerating or overblowing things. So when I say that I’ve not feared for my life like last night for a very very long time (not since Serb soldiers in Kosovo swung their machine guns in our direction) I mean it. It takes a lot for me to express emotion, but I almost cried with relief when I saw the Shell garage.

Today I got up and went to the gym for my session with Jenny. My leg was sore but could still jump and lunge. Well done, leg. I confessed to Jenny that I hadn’t done my 17 mile run, and normally she’d express concern that I wouldn’t be able to do the East Hull 20 or that I was diverging from her carefully thought out plan but she must have seen my face. I was still upset. I still am. What kind of main road doesn’t have a pavement? Why are cars prized over people so that pedestrians don’t even get a safe pavement and are bewildered and frightened by mad rushing vehicles?

I decided to work from home today. I wanted the comfort of my cats. And I still feel drained. When I got home from the gym I gently bathed my barbed wire wounds with rosewater, recommended by a triathlete who runs in minimal clothing on moorland and gets spiked, scored and cut a lot by thorns and wires. I added some lavender oil, recommended by my friend Martha who knows about these things. The woman in the chemist said her mother swears by rosewater oil as a healer of skin. And I got some post: technicolour compression socks. So I put them on so that when I look at my legs I don’t see them trudging endlessly through a long night, but I see this instead: 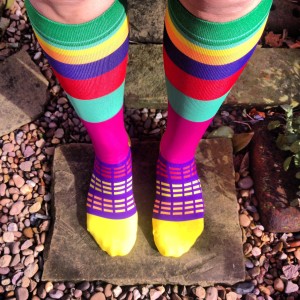 ACTIVITY
MONDAY: 10 MILES OR SO, 4 MILES OR SO WALKING
TIME: TOO BLOODY LONG