Some exorcism was required, still, after last Monday. I planned my long run carefully this week. Unlike last week, I would:

My plan called for 17 miles but I wanted to do 18, because I’ve signed up for East Hull 20, a 20-mile race in East Hull, next week, and I want to do it. Jenny’s plan is carefully thought out and cautious, because she doesn’t want me to get injured, and we both know that I’m prone to injury on my right side. So she didn’t want me to increase my mileage by more than 10% a week, which is as it should be. But I wanted to see if I could do it. Yorkshire stubbornness.

I got the train to Keighley, after looking on this useful site at how far 18 miles away on the Leeds-Liverpool canal was. Janey of Veggie Runners offered to keep me company for some of the miles. She didn’t want to do the whole run because

We arranged to meet at Shipley, six miles from Keighley, then run the “last” 12 miles together. I got up in time, I ate toast and peanut butter, I drove to the train station. I could have cycled or got the bus but had enough forward thinking to realise that I would not want a three mile uphill cycle ride after running 18 miles, and that I would be too tired to get a bus either, and that I may be in a peed-my-pants state which sometimes happens with a 44-year-old bladder and weak pelvic floor muscles. Really! Women pee while running! I was carrying a backpack with a sweatshirt, gels, water, but I didn’t have space for spare clothing too or my usual race kit of a large packet of wet-wipes I didn’t want to sit on a bus worrying about smelling So, the car, with something to sit on.

Nobody on the train looked twice at my rainbow running socks. Maybe it was too early. At the station, I asked for directions to the canal. Turn right, get to the roundabout, take your third right. I did – going via Asda’s toilets first to avoid the peeing-my-pants situation (it didn’t work: 18 miles requires a lot of hydration) – but got past the roundabout and thought: this road is going uphill. Canals are on the flat. This can’t be right.

Yes. Sometimes I’m thick. I googled to check a map and of course the server decided not to work. By now I was getting a bit nervous. I was supposed to meet Janey at 10 and it was already 9. I can usually run six miles in an hour but not at long run pace. But it was a beautiful sunny morning so at least she wouldn’t have to wait in the rain. Anyway I still hadn’t found the canal. I got to a bridge over the River Aire and thought shit, is everyone directing me to the river? A canal can’t be on a hill. I asked an old gentleman – I call him that because he was dressed properly in coat and hat, elegant in the way that old people are when they leave their house – where the canal was. He directed me uphill. There, at the end of that street. And there was a sign, and then there was the canal, on a hill. What a thing to behold. I love engineers already, but engineers who put canals on hills: brilliant.

I set off running. Then I stopped to get my earphones right. Then I stopped to get my New Yorker podcast right. Then it was hot so I had to take my jacket off and then I had no pocket, so I ran with my iPhone in my hand but that made it skip so I stopped and put that away. I already needed to pee but the only options were people’s canal-front gardens, and it was late enough in the morning for walkers and dogs to be about and empty stretches to be impossible. The sun shone, the water glistened, the ducks swam. It was lovely. But Shipley was still six miles away. I saw a sign saying Liverpool 115 miles and thought, shit, I’m going in the wrong direction. If I’m stupid enough not to realise canals can be cut into hillsides, perhaps I’m daft enough to run to Liverpool when I want to go to Leeds. But the Leeds distance was on the other side.

I ran past the Bingley Five-Rise Locks. I’ve seen them before, but not passing them quite this fast. I would have stopped to gawp, as they are beautiful, but there was no time. 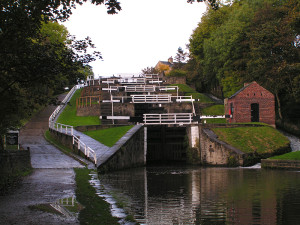 Later I encountered a police officer talking to three men by another lock, and a path that seemed fenced off. I asked the police officer, can I run this way? Aye love, or you can swim it.

It was six miles of beautiful canal, peaceful water, nice soft path. No roaring rush-hour traffic, no fear, no panic, no running-loathing.

I was 15 minutes late to meet Janey. She greeted me by offering a banana, we both drank and set off. I’m trying not to have gels before 10 miles so my body gets used to using energy without extra carbohydrates, but after 8 miles I started to feel oddly weary. I kept going, but then stopped for a gel. My legs started to feel heavy, and by mile 12 or so, I felt wooden and they felt leaden. Janey has a lovely light-footed running style and also manages to make running look natural and easy. But by now I was feeling like a clod-hopper, like my feet were thudding too heavily on the ground. I tried to adjust my cadence to Janey’s, as hers is fast and efficient. But I am taller and my legs are longer, and I don’t have her tippy-toe forefoot strike so it was hard. Though once I did attempt to adjust my running style, by standing taller, kicking a bit higher and trying to increase my footfall, it felt easier, but the problem was that all that took a bit of effort and that was increasingly hard to find.

I kept apologising to Janey. She knows loads about nutrition and vegetarians (you may have guessed that) so we talked about that for a while, and I realised that because I’ve been so careful at getting enough protein, I’ve been neglecting eating enough carbohydrates. That probably explained my leaden legs. There was no other reason I could think of: I was well-rested, I was hydrated, I’d had a good breakfast.

Even so, it was a beautiful run. I forgot to do my celebratory jump when I got to 15.1 miles, my longest ever distance, but remembered at about 16, so Janey took this great picture. That, however, was the fifth take: Well done, tired legs. 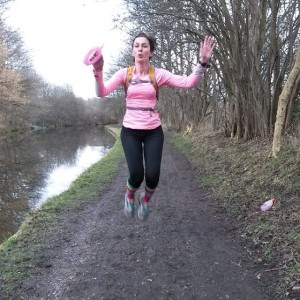 At Rodley the walkers multiplied. We met a little girl who looked in wonder at my socks, and at Janey, and at me. She was with her dad, then her mum and a friend ran past – as in, they were running for sport, not just running past – and she burst into tears at seeing her mum run off. We ran off in the other direction with the sound of her committed inconsolation getting fainter as we ran.

My mileage calculations were slightly off, or that site is slightly off, because we got to 18 miles with a mile to go to Leeds city centre. But I stopped. I’d pushed things enough. We walked the last mile, I drove home, and then followed Jayne’s strict instructions: Eat something as soon as you walk through the door, before you even stretch. Peanut butter and oatcakes, preferably. So I walked through the door and did this:

And the next day I got up and ran five miles, cross-country, for the last of the PECO XC league. We didn’t win the league, but we came second, the highest ever. And somehow my legs got round the course even when it seemed impossible. And I applauded them, and me, and there some flowers at myself, and in my head, I did this again. 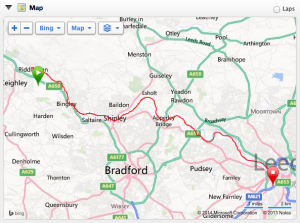 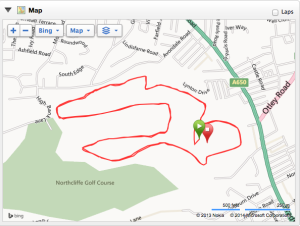