I have thirteen weeks or so to go before the Manchester marathon. That came as a bit of a shock when Jenny handed me my plan. I’m not worried. I think I’m half-marathon fit (I hope so, as I’m doing one the week after next), but even so, the thought that Marathon Training is back is odd. One of my New Year resolutions is to dance more, but the other is to learn the difference between “could” and “should”. Marathon training has a lot of “shoulds.” But they are shoulds and not coulds because I want to do what I want to do, which is run a marathon in 3:50. I can do it, as long as I train and as long as I don’t get injured. Oddly, for the past few weeks, I’ve noticed that I’m running naturally on my forefoot/midfoot much more. I’ve no idea why. My shoes are quite minimalist, but I am not actively trying to run forefoot. Anyway my feet like it but my calves don’t.

So, last night, after I’d been on deadline all day, I thought: I’ll have a dark city streets run. I haven’t done that for a while. It seems that these days I mostly run in company. But I do like evening winter runs on streets, as long as I get choose the right streets (not Harrogate Road, for example). Pavements are obligatory. At 6pm, as I told myself it was now or never, as the wind was starting to get up, I got my kit on and got myself out of the door. I put my housekey in my jacket pocket, and set off. I had a route planned, up Harrogate Road (the bit with pavements and civilization) to the Alwoodley Lane junction, then right along Wigton Lane, back down Shadwell Lane and back home. A nice 7 mile loop, as my plan required. I enjoyed it. I like running past people who are walking home, and wondering what they’re thinking. I like running past the huge posh houses on Wigton Lane and wondering what on earth possessed them to build something so expensive yet so banal and with quite so many ugly columns. I wonder at whether the families inside these big houses are happy, or whether the husband has seen his mistress at lunch-time, or the wife has got close to her massage therapist or colleague (horrible and presumptuous of me, but Wigton Lane does seem a stay-at-home mother kind of lane). Those imaginings keep me going for a couple of miles, until the end of the lane. Then right-turn past the pub and the convenience shop, and I got to the junction where I knew I had to take Shadwell Lane. So I did.

Now there is a curious thing about Leeds. I grew up 9 miles away in Dewsbury. I have lived here now for nearly six years. But I still don’t think I know it well. I know bits of it. I know bits I live in, and bits I work in and bits I run through. But there are villages and parts of it that, unless I’ve had cause to go there, I know not at all. I ran along Shadwell Lane, thinking, this is great, I get to know Shadwell Lane, which is a road I’ve only taken about once, and that was in a car. I carried on, past fields, and more fields, then some cottages, then a pub, then a bus terminus (as in the bus got there, turned around in a turning circle and then set off again), then to the other end of the village. At this point, after running for two miles down the lane, I thought, I should have reached the ring-road by now. Suddenly my vague running brain thoughts – such as “I didn’t realise there were so many fields so near the city centre” and “it looks very rural round here, or it would if it weren’t pitch dark” and “oh I’d better run on the side of the road with houses on rather than dark fields and footpaths except there’s no pavement on that side” – all came together to the shocking realisation that I was going the wrong way.

I was going in completely the opposite direction.

I know that my geographical and spatial orientation and understanding is very poor. My brain just doesn’t retain it. There are people who can immediately tell me that we are facing a north-east direction, but I am not one of them. (I’ve just bought Tristan Gooley’s book “A Walker’s guide to Outdoor Clues and Signs” to try to improve.) But standing at the far edge of Shadwell Lane, peering at a road sign that said Wetherby in one direction and the A58 to Leeds in another, in darkness, with no-one around, I thought:

I know why. I’m out of the habit of solo running and just forgot. Stupid, stupid, stupid. I had a few choices: I could run down the A58 to Leeds, but being geographically and navigationally challenged, I couldn’t remember where that would take me.

Did I mention that by now it was 7pm and I had an important meeting with someone (ie actually a work meeting) in Chapel Allerton at 8pm?

I thought: I can ask someone where I am. But there was no-one about. So I did the only thing possible: I set off back in the same direction. This is never fun for a runner, especially when you have carefully planned a loop in your head. Never mind. I ran up to the bus stop, saw that the bus only came to Shadwell and turned back to Leeds, and that it set off in the direction I’d come from. So there was only one thing to do, and that was add a four mile detour to my six mile run, put my head down and just bloody run.

I just bloody ran. My calves were yelling at me. I was warm, then cold. I was extremely thirsty because I’d drunk only one glass of water all day (another resolution: HYDRATE MORE), and I was trying desperately to get home in time to shower and have some food before the 8pm meeting. So as I ran back, this time the right way down Shadwell Lane, my thoughts were:

I ran, and I ran, and I ran. I got home at 7.45pm. I ate Weetabix. I didn’t wash. I went to my meeting, an important one, and I yawned all the way through it. Today, my head and my legs are tired, and although there is a should on my plan, it’s turned into a “could,” because tomorrow is the West Yorkshire cross country championships, and my legs will get battered enough.

At least I know where Shadwell is now. 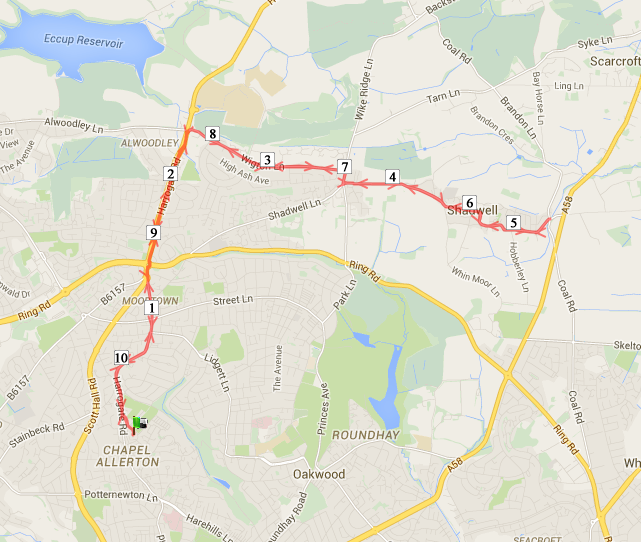 DISTANCE: 10.55 miles (I meant to do 7)
TIME: Quite a bloody while
LESSONS LEARNED: Several