Ten days. Quite a lot of running. Not a lot of writing. First, an adjustment: I was actually running at the right pace for the intervals, as I saw when I uploaded the Garmin data. Damn.

But first. Nothing on Saturday as I went down and back to Oxford for a commemorative service for departed members of my old college, Somerville, which included Louise. I must salute here the deputy principal, who read short obituaries of 45 people, in ascending order of their age, and managed to make each one sound interesting. (“Somervillians are known for their great achievements. After graduating, X became a librarian in Norwich.”) (Oh, that sounds like I don’t rate librarians. I do! I do.) It was an endurance race for the audience – I started to get dizzy by the time we got to the 90 year olds, and a lot of Somervillians reached 90 – but a triumph for her.

Andrew has been injured and off running, but he gets his fitness back quickly and then he goes ambitious. I managed to restrain his Scott Jurek tendencies, and we arranged to meet at 8 to run around the Leeds Country Way. The last time I did that route was with Janey in horizontal driving rain. This time it was raining, but also warm. For the first few miles all was well. Nobody was about, the rain stopped, the view was serene. Then we ran through East Keswick, up the hill (which I walked: more later on why), and got on to the path that leads down to the River Wharfe.

A jungle. Everything had grown lusciously and insistently. It looked like my allotment mixed with the Amazonian forest, only there were nettles instead of tropical plants. We got to the river OK, ran along it, then switched to running in a field. I stayed in the field, Andrew ran on the path, as they were parallel, and then suddenly they weren’t, and I had gone too far to get back to the path. I carried on going. Andrew’s shouts got fainter. I found myself like Dante Alighieri:

Ie. In the middle of dark wood in the middle of my life, lost. I am in the middle of my life, probably, but the wood wasn’t dark, it was just a forest of nettles. There were banks and banks of them, and I was in my usual summer running outfit of vest and shorts. Eventually though as I had no idea where to go, and it seemed going through the wood was the only option, I had to push through a bank of nettles, walk through a wood, climb over a barbed wire fence and lo! There was Andrew running up to meet me.

We carried on, running through a field of sweetcorn, then broad beans (these are facts I know now, having an allotment). Neither of us could recognise the path any more, because the views had all become greenery. Everything seemed to attack us. Spiky comfrey, sticky sticky weed, ever-stinging nettles. The best thing to do is persevere, so we did, and then at the end of the field, after I had spent half an hour wishing my crops looked like those crops, there was the track up to Harrogate Road. I walked it, because once again my legs were knackered. I’ve been trying to adjust my diet because I’m eating too many processed carbohydrates and not enough protein, so maybe that’s why. Or I’ve not been drinking enough and am dehydrated. Or it was just one of those days.

On Harrogate Road, there was a huge amount of traffic, but most of it was beautiful classic cars. We ran past some Downton Abbey ones, ducked into the permissive path through the magic garden gate. “Shall we do a lap of Harewood?” asked Andrew.

The nettle stings still hurt today. Andrew’s legs were red and covered in angry bumps. I got home, covered my stings with anti-histamine cream, ate, slouched, then went to my allotment and dug for hours.

Monday. My artist mates Norrie and Dean, fellow-studio-holders at East Street Arts, and seriously talented artists both, are supposedly my team and I am supposedly their coach, an arrangement that grew from me nagging them about running. (Amazing. Really? I nag about running?) I’ve been running with Dean once, up around Eccup, but although Norrie talks about running a lot, I’ve never seen him do it. I know he plays football once a week, but he also eats and drinks a lot of crap. So when he said on Monday morning that he felt like doing a run later, I didn’t take him seriously. But then, at 7pm, there we were in the car driving up to Harewood. The route was their idea: I’ve run around bits of Harewood but never the whole route. That’s fine, I thought. I have to do intervals, and it’s quite flat.

That was the first surprise. Hills. The second was that of all three of us, Norrie was the fastest and most fluid. I was astonished and impressed. Dean also did well considering that – as he’d been intently sculpting all day – he hadn’t eaten anything except for a couple of biscuits. I looked at him aghast when he said that, being obsessed with my food these days, and how it can fuel me better. But he still did seven out of the eight intervals. It was a stunningly gorgeous evening and the grounds of Harewood Estate in evening sunshine are so magnificent I almost can’t run through them because I want to stop and gape. I will be back to run around it again, but not to do intervals. 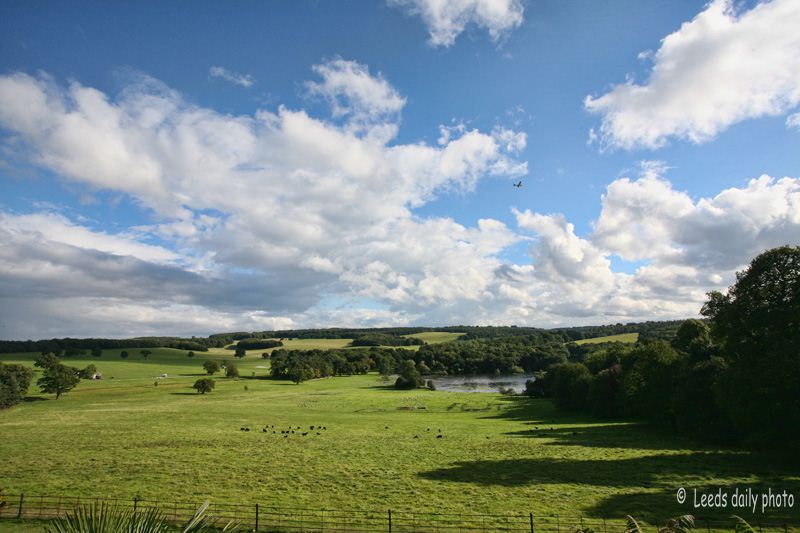 So, well done team. We did eight half-mile intervals at 7.20 minute mile pace, ish. Except for the hills. I told Jenny and she said, “you’re taking too long to rest.”

About my food obsession: I have never been on a diet. I have never wanted to be someone who counts calories. But now I do count calories. I look at what’s in Twixes and then I put the Twix down, sometimes. This makes me unusual in my running club, where blithe eat-anything, drink-anything is the prevailing attitude. And I wish it were my attitude, because I don’t want to count calories. And I shouldn’t have to, right? I train five times a week.

But I’ve put on half a stone since the marathon, and I don’t like how that feels. Apparently it’s common: your marathon appetite, which is huge, doesn’t change even when your training drastically diminishes. Also, I developed a bad habit of eating Greggs’ chocolate eclairs. Result: the scales are going up and up. I liked how I felt when I was lighter. I liked how it felt when I ran. But it’s taking me a while to get rid of my new bad habits. So today I have ordered a copy of No Meat Athlete, by Matt Frazier. Not just because of my calorie-counting and the eclairs, but because I want to fuel myself properly. When I gave Jenny my food diary, after failing to do so for ages, she pointed out that most of my meals were heavily carbohydrate, and that I was getting hardly any protein. Oh. So I made a big effort to eat protein, but now I think I’ve gone in the other direction. I ran a fast – for me – ten mile race around Otley last Wednesday, in which I got a PB despite it having three miles of hills. And generally I’ve been feeling tired and even with all my training, lethargic.

So something’s not working. Or perhaps it’s just in my head. As Andrew said when I complained of feeling a bit weak on the run: what can you blame now? Your glutes, your piriformis, your food, your sleep, your hour of squash. Just get on with it. He’s a scientist. He’s straightforward. When I asked him why I was coughing after running, he said, it’s from the bug you had, your airways are irritated, it’ll clear up in three months, that’s my diagnosis. It did. Not bad for a microbiologist.

On the other hand, this weekend I’m running a 15 mile race, and I’ve barely thought about it. That’s probably arrogant. I’ll be blithely doing marathons next.

Then at my club run on Wednesday, I finally encountered the dreaded Post Hill. In our club, this is talked about with the reverence according to a Kraken or Minotaur. It was a beautiful evening, but hot, and we ran up through delightful Armley to Pudsey, then into some woods, and along a bit, and there it was. It’s named Post Hill after the Yorkshire Post, and even motorbikes have difficulty getting up it. So did I.

A postscript
I realise I use names of running friends and others in here without always identifying them. Here is a cast of characters:
Andrew: fellow Kirkstall Harrier
Janey: co-founder of Veggie Runners along with Bibi, & my marathon training partner to be
Norrie, Dean: artists & studio-holders at East Street Arts, where I have a studio, & my team
Jenny: my personal trainer & director of Motiv8 North