I don’t remember entering this race, but then, I don’t remember entering many races. I do them in a flurry, like I’m on Racebest crack, and then months later, discover I’m running them. Apparently I entered Vale of York when I was still off with injury, so I must have been feeling optimistic, like I could actually run a marathon, as planned, in October. By September, I was feeling less optimistic. I was back running, but any formal marathon plan had long since gone out of the window. I’d done a few longish runs, but the longest had been 15 miles. So I had no choice: I’d have to turn a half-marathon into an eighteen mile training run.

We got to Sherburn airfield early. Martin and Mark, the race organisers, were still setting out the start bollards. The airfield had looked on the map to be about a mile long. I’d looked on gb.mapometer, my usual source, for a nice five mile run, but the lanes around Sherburn-in-Elmet were mostly the country kind that don’t have pavements. In the end it seemed easier to just run up and down an airfield for five miles. So I did. And it was nice, actually. I saw hares or rabbits scampering off at the far end of the tarmac road, and at the other far end were two polite RAF cadets marshalling the traffic, who looked at me quizzically until I said “marathon training” and then they looked at me pityingly instead. Martin shouted from his car, “You’re in the lead!” and I shouted back “this is the only race I’ll ever win!”. The miles passed quickly, and I’d left myself half an hour between finishing them and the start of the race, for the usual toilet necessities, and for some coffee and bananas. It could have gone wrong, of course, and I could have stiffened up in that half hour, but actually I was fine. The sun was out, and it was a beautiful day. I told myself to put the first five miles out of my head (a tactic that didn’t really work as my Garmin kept going rather than going back to zero) and off I set again.

I knew the first mile on the airfield road intimately, having run it several times already, up and down and up and down. I started near the back to avoid congestion and because it was chip-timed. I didn’t have a pace in mind, but it turns out my legs wanted to run at 9.30 minute miles and didn’t really budge from that. There were about 1400 runners but the congestion disappeared pretty quickly, there was always space to run, and it was a friendly atmosphere, with a good mix of club and unaffiliated runners. The route is lovely: flat, mostly – hence its PB reputation – apart from a railway bridge near the beginning. The views were fields or woods or pretty villages, and supporters now and then: thank you to them. I liked the three in camping chairs who were sitting by the road in the first mile, and still there for the thirteenth.

I’d guess half the route was sun-exposed and half went through beautiful shady woods, though I am probably misremembering because the woods are what I remember most. I didn’t find it too hot but I know some people did. I watched Burjor and Patrick (lovely, lovely blokes but usually a lot slower than me) overtake me and disappear, but I wasn’t going to budge from my pace. The voice in my head said, “this is a training run. This is a training run.” I made sure to drink at every water station and take a gel, and I felt properly hydrated and nourished all the way round. I loved that the water volunteers were bikers with big motorbikes, and I enjoyed the little girl spraying us with her hose-pipe. Being overtaken by a Dalmatian – a woman in dotty shorts with dotty legs and two black floppy ears who told me about Pet Rescue and how it does pet therapy with children – was fun. I ran alone for most of the race so had time to think my usual thoughts which are not, as most non-runners think, always the compassionate and caring kind, because sometimes I’m thinking, “your bum’s a weird shape,” or “you’re going to get a hip injury with that flailing foot,” or “for the love of god get a decent sports bra” or “TAKE THOSE HEADPHONES OUT” to some veering numpty: those fleeting running brain thoughts that keep you going, like oil on wheels. I bet you have them too. I ran behind a tattooed woman for a while, but all I could see of her back tattoo underneath her vest was a wing and a nipple. That kept me entertained for a while, not least because I was trying desperately to speed up so I didn’t have to look at it any more.

About four miles from the end, I thought, this doesn’t feel too bad, and then, I’m going to be over two hours. This bothered me a lot at first: my PB is 1:49 and I’ve never run a half marathon in over two hours. But then I shoved my ego back in the box and thought, I’ll have run 18.1 miles (actually Martin, it was 18.2), I’ve had a crappy few months with injury and it’s amazing I’m running at all. Not only that, but my tendon doesn’t hurt and I may actually be able to run a marathon. By the time I got to the final strait, I was still managing to overtake people, and getting cheered on by my team-mates – now all pretty in the pink technical t-shirt – and I was quite happy. Even if Burjor and Patrick both trounced me.

Vale of York has a reputation as a nice, fast race. It’s definitely nice, and if you don’t run five miles beforehand or have had a spotty running year, or if it’s several degrees cooler, then it’s probably fast too. There were some grumbles about the bottles of water not having caps on – making the bottles difficult to run with – and about chaotic marshalling at the finish, so that the fast runners found themselves competing for space with an ice-cream van. But overall, it was smoothly organised and run. Also, how often do you get very polite young marshals in RAF uniform? Or a medal? There are rumours that the race may not survive building plans for the airfield land. I hope not, because I’ll be back. 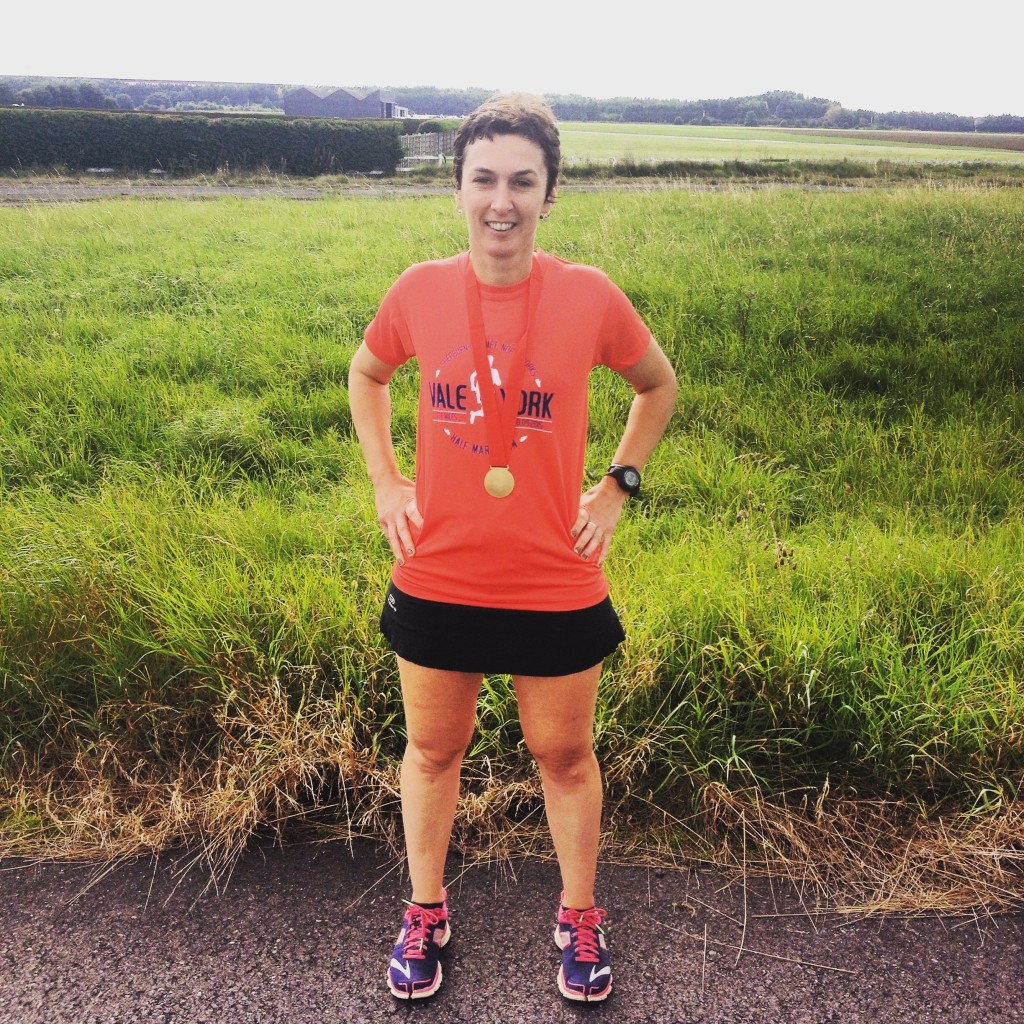 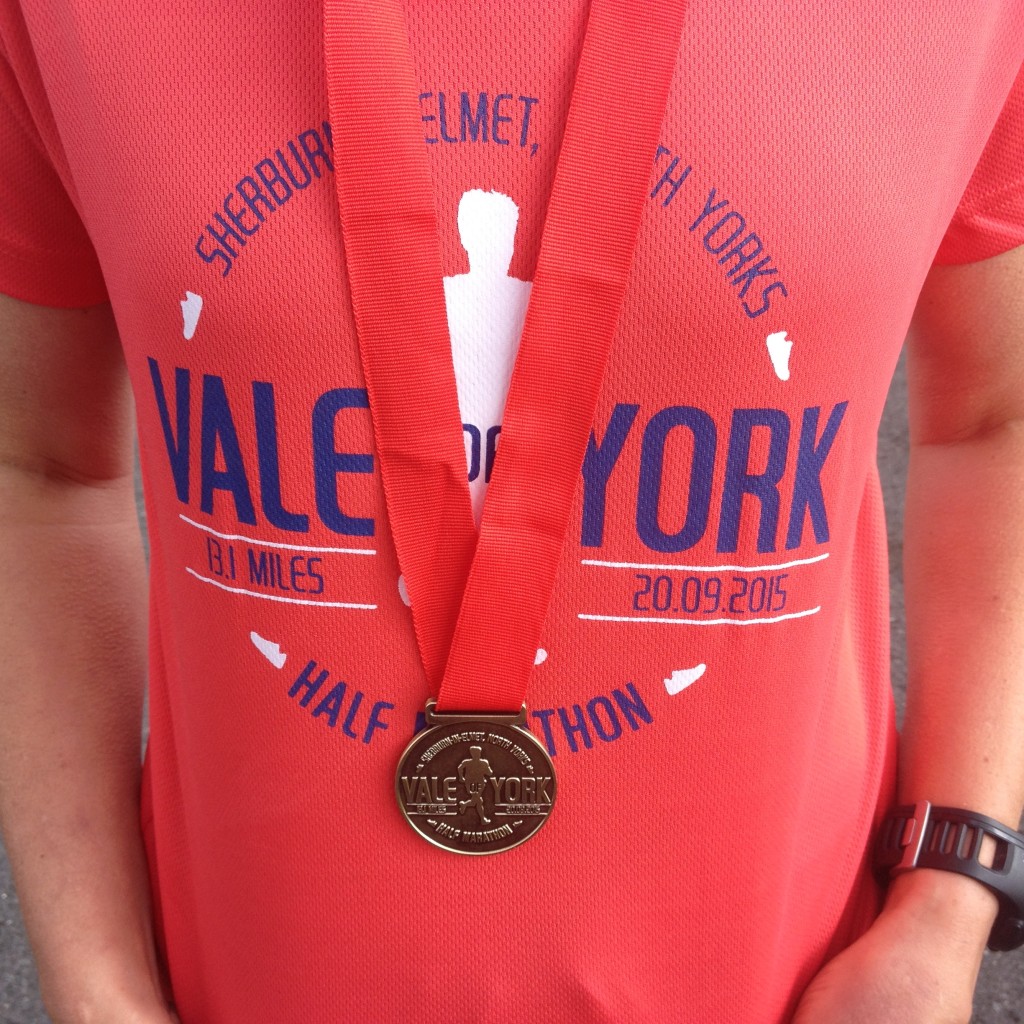 One Reply to “Vale of York half marathon”