Lucy is pleased. Lucy is very pleased. Lucy is my wonderful physio at Coach House Physio. I think she’s wonderful even though she has caused me much pain by combining her fingers with my muscles, tendons and nerves. But I’m very pleased that she’s pleased. I thought I may have overdone it last week. I ran 4 times in 7 days, or 5 times in 10 days and after the fourth time in the week, my tendon hurt significantly. As in, back to the Voltarol and painkillers. But it only lasted a day, and I rested for two days, ran on Monday morning and it was fine. Soreness is normal, said Lucy. She wouldn’t have expected anything else; the tendon is getting used to “loading” again, and it will complain. She thinks it will settle down. Meanwhile, there’s my hip. My hip has been sore for years. I always assumed it was bursitis, because it aches when I sit a lot, or when I’ve been sleeping on it in bed. But Lucy thinks not, because it doesn’t do something that it should if it were bursitis (I can’t remember what). Instead, it’s the whole body thing again. After months of doing glute exercises (and actually doing them: I have been both obedient and cautious), my gluteus maximus muscles are activating beautifully. But my hip flexors aren’t working as they should – I know this from visiting Trimechanics last year – and my back is taking the load. When Lucy’s fingers found my QL muscle, I yelped. A lot. But the pain is worth it: when I arrived at Coach House, my pelvis was wonky and my right hip was higher than my left. By the time I left, many yelps later, they were equal.

And the verdict is good. I can keep on running. I have new hip flexor exercises. One day of rest between runs, but that’s just rest from running, so I can do strength training (as I can now squat without pain for the first time in months), swimming, cycling, anything. Here goes, QL or not.

Meanwhile, the best way to do injury-free running is to watch other runners running while not doing it. So I did that at the weekend, supporting FRB while he ran the Wharfedale Half Marathon. I’d entered it too but withdrew and they kindly let me defer my place until next year. My name was still on the entry list when we arrived at Wharfedale Rugby Club in Grassington, which runs the race. It made me feel like a running phantom.

I wasn’t running, but I still love race days. People milling around in kit. A general air of good cheer, mixed with nerves. And I get to gawp at nice kit and lean muscles. On Saturday I learned to love Rapha cycling kit and Inov8 tops, both of which are way too expensive to buy outside sale time, but gorgeous. But I don’t need any kit. I don’t need any kit. (If I repeat it often enough I may stop buying stuff). About a dozen of FRB’s club-mates were running, but none of mine, oddly. We’d got there early, and took advantage of the free tea and biscuits. Then I set off. As usual FRB Navigator General knew exactly where I should stand. I was on foot, as my bike has been punctured by Leeds’ shitty road surfaces yet again, so I walked for a mile or so, down the Avenue from the club, up towards Grassington, and then out again towards the dales. It’s such a beautiful place. Dale on one side, moorland on the other. There was only one problem: Wind. We’d intended to camp, but FRB, forecast-checker, had seen that 50mph winds were predicted. And here they were. It was spectacular. I got to the crossing of lane and road where the runners would pass, then headed up the hill. There was a bench under a tree so I sat there in the hope that it would offer shelter. It didn’t, but it was a bench, and I had a sandwich to eat so I did. The runners came up about ten minutes later. They’d only done about a mile, but I cheered them on anyway. If I could read the club vests, I used the club names – “well done [insert club name here]” with the occasional “well done everyone” to be inclusive. As usual, I only started getting thank yous about two thirds of the way along the pack; everyone else probably doesn’t have the lung capacity. Though I’m sure that I usually manage to thank every supporter or marshal no matter how exhausted I am. At least, I hope so.

One of the first ladies was the amazing Karen Pickles, who runs for Pudsey Pacers. She ended up winning it i.e. being first lady. The male winner was Frank Beresford of Otley AC. I’d seen her before the race and she wasn’t sure she’d do well. But that’s because she’s modest as well as extremely fast. I like extraordinary talent combined with modesty: who wouldn’t? FRB came past. He managed a thumbs up and a smile, and in return I yelled “MOVE YOUR ARM” because he sometimes runs like Haile Gebrselassi, though as far as I know he didn’t spend his childhood running miles and miles to school and back with schoolbooks under his arm, which explains Haile’s frozen arm. He’d been adjusting something in his pack, he said, and appreciated the reminder. So he says… He was running well, but he hadn’t expected to beat his time last year, because of the wind. But he did, by ten minutes. I saw them all pass, nearly got brained by some branches that broke from the tree I was sitting under, then went into Grassington to look round. That didn’t take long, and I was back at the rugby club in good time to see them come back. The race was impressively organised up to that point, but for some reason, the organizers were not preventing traffic from driving down the avenue, which is where the runners came onto for about 300 metres before heading into the rugby pitch to the finish funnel. Even a marshal pointing out that several hundred runners were going to be sharing the road might have been a good idea. But car after car kept coming, and sometimes the runners had to run around a couple at once. At one point three cars formed a mini traffic jam; one tried to do a three point turn, and the runners were having to run round them. Ludicrous.

I cheered and clapped, including Karen, and then, coming in ten minutes faster than his time the year before, FRB. But he didn’t hear me (because of the wind) or see me (because he was knackered). See? Phantom.

Afterwards I milled around with everyone else. It’s the hardest bit of supporting, I think, because you want the endorphins that everyone else is soaked with, while you’ve just stood around for a while watching. But it’s still a lovely atmosphere, and you can soak some of the happiness up, and the rugby club was serving chips. Nowt better.

Afterwards, we spent the day in the pub, watching the flags blow in the gusts, and deciding whether or not to camp. We did. The wind died down by 10pm, and if it weren’t for the bonkers birds in the trees around Wharfedale rugby club’s training pitch, who started a dawn symphony at 3am, it would have been a peaceful night (at least for the person in our tent who got the non-deflating airbed, i.e. me). 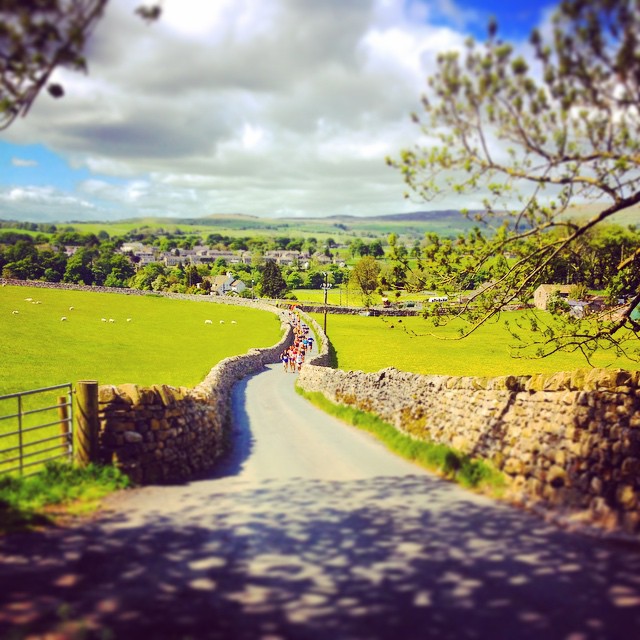