Since the Pudsey 10K I’ve kept running. No more than three times a week. But I did break my golden rule of not running two days in a row. Last week I went to club training. It was the beginning of the week’s heatwave. There weren’t many of us there; under 20, and the route was not the best: along the canal, but then a big dose of ugly industrial Holbeck, before going up to Armley Park. I found it hard. Partly that was because most people around my pace left after five miles. I thought, nonetheless, I’m going to try the full seven. Half a mile later, I was deeply regretting that. I ran with a clubmate I don’t know very well, and we chatted, but god it was hard. The scenery was horrible, the rest of the group were all speedy blokes, and the hills never stopped. I arrived back at the club somewhat battered. The next day, it was the Danefield Relay, a three mile team relay around Otley Chevin. I did it last year and loved it. Even so, this would break my Golden Rule. I am trying to push my tendon to see what it will tolerate; I’ve increased distance, changed terrain, run slightly faster. This was the first test of frequency. I ran and I was slow – 31 minutes for 3 miles, though with hills – but it was OK. The route was through fields and woods, and was what fell-runners call “technical,” i.e. lots of rocks and roots, in not very good visibility. The next day I paid for it. My tendon was sore. I couldn’t do a deep squat without the soreness kicking in. So, ice and rest.

On Sunday I was meant to run the Eccup 10. I love this race. It’s on mostly closed roads and lanes around Adel and Eccup, with a tour around Eccup reservoir, which I love. But then I did something a bit daft. I installed a treadmill desk. I’ve been thinking of doing it for ages, and finally did, with the help of a friend, a powerdrill and a Jigsaw. I wrote about it, and how I built it, on my serious blog. Walking while working makes all sorts of sense, particularly to a runner. But installing it a) during the hottest temperatures for years and b) with a still slightly dodgy tendon: maybe not the most sensible idea. I didn’t overdo it: I didn’t walk for more than 90 minutes each of the three days I used it. I couldn’t anyway as my studio was so baking hot, I was melting (I’m walking while writing this, at 2mph, with the assistance of a desktop fan). But my right foot and ankle niggled. It was a different niggle: more towards my Achilles than my post tib tendon. On Saturday, it was enough of a niggle that I iced it and worried. I think I was stupid to walk barefoot for the first day, and soon switched to my running shoes and orthotics. On Saturday, I said to FRB, I don’t think I’d better run. Ten miles is too much of a stretch in distance, my Achilles is niggling, and I won’t run.

Then we went to do some allotment work, my mood lifted, and I started saying, I’m going to run, only with a really annoying Forrest Gump impression.

And I did. The next morning, race mode: A bagel with marmalade, as usual. Too much tea, as usual. I wanted the tea to get alert, but I’ve fallen behind with my pelvic floor exercises and knew there was a big risk of peeing my pants. Then again, I had a great and illuminating chat with a few women runners at a party on Friday, which began with one of them saying, “I totally pee my pants all the time!” Her reason, I think, is because she’s super fast. Mine is because my pelvic floor has got as out of condition as the rest of me. Anyway before that there was another slight problem: I’d left my running shoes and orthotics in my office. Oh dear. This was not the best thing to do when FRB gets quite race tense. But to his enormous credit he said, “OK, let’s go,” internalised his anxiety and we called in at the office, and got to race HQ with plenty of time. It took five minutes to pick up my number and then I had no choice but to join the toilet queue, which had about 100 people in it. I thought, oh. It’s going to be a pee and sprint to the start line. It wasn’t, but I only had about five minutes to spare. We gathered and milled, and then we were off. I was so busy trying not to set off too fast that I didn’t even notice Jonny Brownlee waving the flag to start us off. My friend Gemma did though: 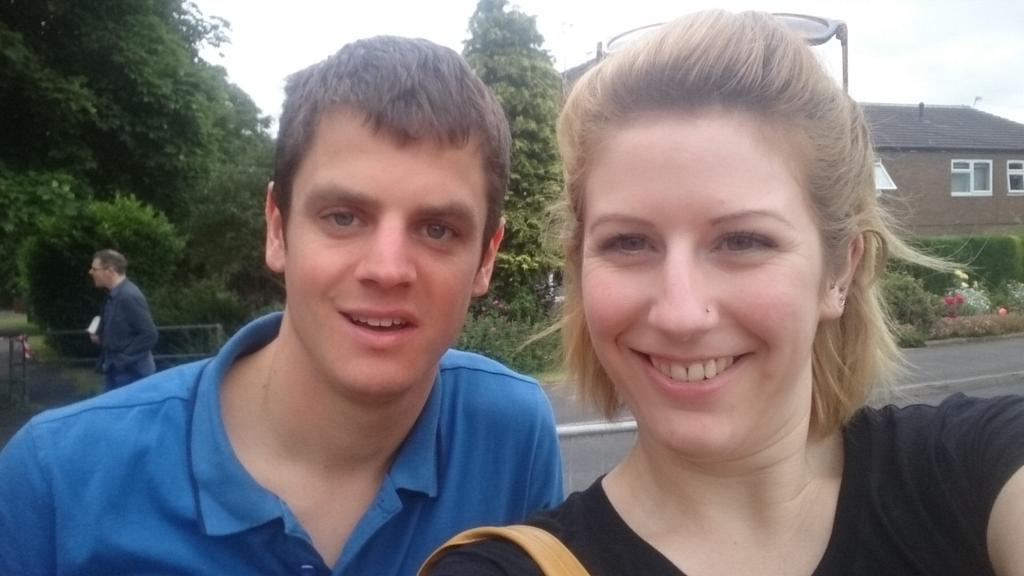 I set off steadily, at about 9.30 minute/miles, and I kept that going throughout. The first mile, though, was awful, because my bladder lost it. I was embarrassed, and desperately looking for a bush where I could pee without 800 runners watching me, but there was nothing for about a mile, until finally the route went off to the right and to the left was a coppice of trees. What a bloody relief. After that, I was fine, but I lost a couple of minutes. That shouldn’t have mattered: no way was I going to be anywhere near my ten mile PB, which is 1:23. So I stuck my ego in the box and concentrated on running properly: head up, torso straight, slight lean, arms going strongly backwards, shoulders relaxed. I’ve been examining race photos of me, not for vanity, but to check where my feet are going. A splayed right foot means my hip and pelvis need strengthening. I noticed that my pace was similar to a woman who was 50 or 60, so I stuck with her for a few miles. The roads were nice, the temperature, I thought, was perfect: cool, and cloud cover. And I just enjoyed it. There were water stations at miles 3, 5 and 8. I took a gel at the second and third, and I felt fine. I felt good, and strong. I overtook a few of my clubmates, and they all encouraged me, and I stayed steady.

I’d noticed a young lass in front of my Accidental Pacer, who was also going at a really steady pace. I couldn’t catch her for a long time, then with about two miles to go I did. We got chatting. She was running unattached, and said she’d only been running since January. This was the longest distance she’d ever done. She has just moved to Lancashire so I said, there must be some good fell-running clubs there and she said, yes, but clubs are so intimidating. Everyone in them is so fast. I had my usual response: ours is so friendly, everyone is encouraged, no-one is left behind. But I remember when I was unattached – a horrible word – and had entered the Kirkstall 7. I felt completely excluded by all the cliques of club runners in their same colour vests, and they were all talking about PBs and sub this and that. I told myself I would never be like that. But of course I am. Anyway, all that chat got us to the bottom of the last hill. Eccup 10 is a lovely race, but it ends on a hill, which is not lovely. The route has changed this year, in fact, and now there are two climbs at the finish instead of one. But the gels must have been working, because I didn’t walk any of the hills, and I still felt strong with half a mile to go. As we climbed the last hill, the young lass was slowing, and I chivvied her along. Slow steps, stand tall, don’t lean into the hill, it’s easier. And she did. And as we climbed, I heard a faint “ROSE!” then louder and louder, “GO ROSE! WELL DONE ROSE! STRONG FINISH ROSE! GO ROSE GEORGE” and there were a dozen of my team-mates waiting to cheer us in. Some had not run but come along to support anyway, some had finished but come back to support us.
At Danefield Relay, when most teams had finished and gone home, we still had a runner due back. A few of my club-mates went to the finish to cheer her in, because the hill that Danefield finishes on is even worse than Eccup. I thought it was weird that no-one else was about, but assumed they had just gone home. Then, suddenly coming round the corner was not one runner in a purple vest but a dozen. And they were singing. They had all long since finished, but run down the course to escort Bethan up the horrible hill, singing “rolling down the river.” I actually choked. It was a really lovely sight. 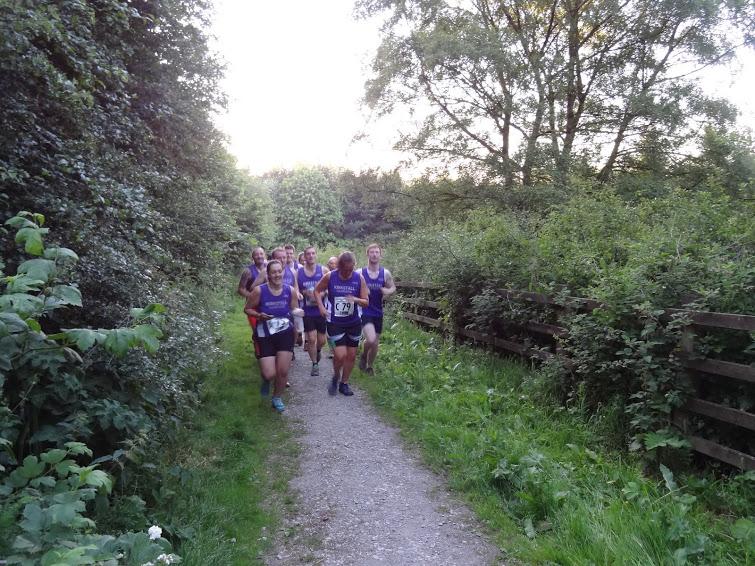 And so were the Eccup cheerers. So I said to the young lass, whose name was Steph, “See?’ and she said yes, with a look of surprise on her face, and then I said, “come on, sprint finish” and we did, and I beat her. 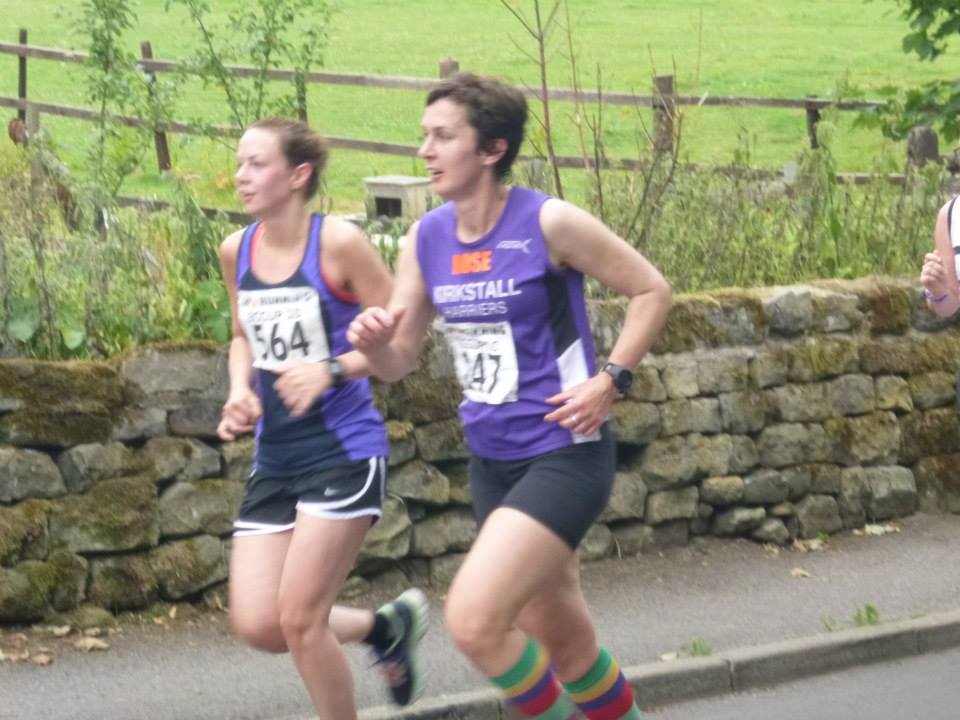 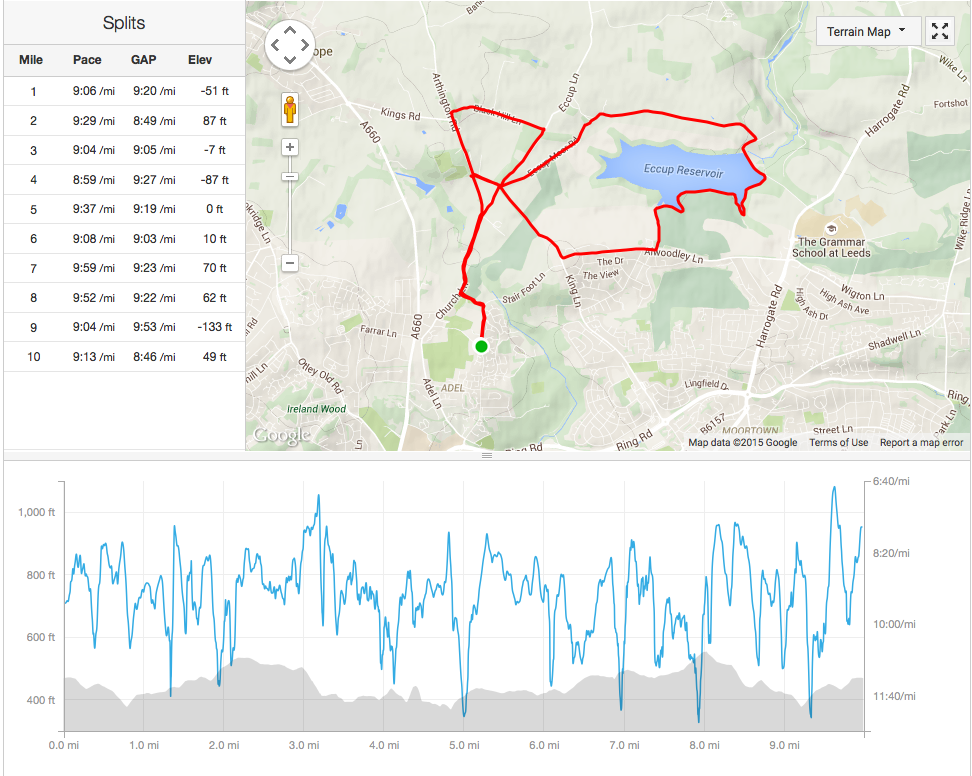