I never sleep well before a race. I certainly didn’t sleep well before this one. I was nervous. I was so nervous that I actually properly prepared, unlike my usual last-minute-haphazardness and constant oh-I’ve-forgotten-something trips that drive FRB to distraction. I prepared a list: 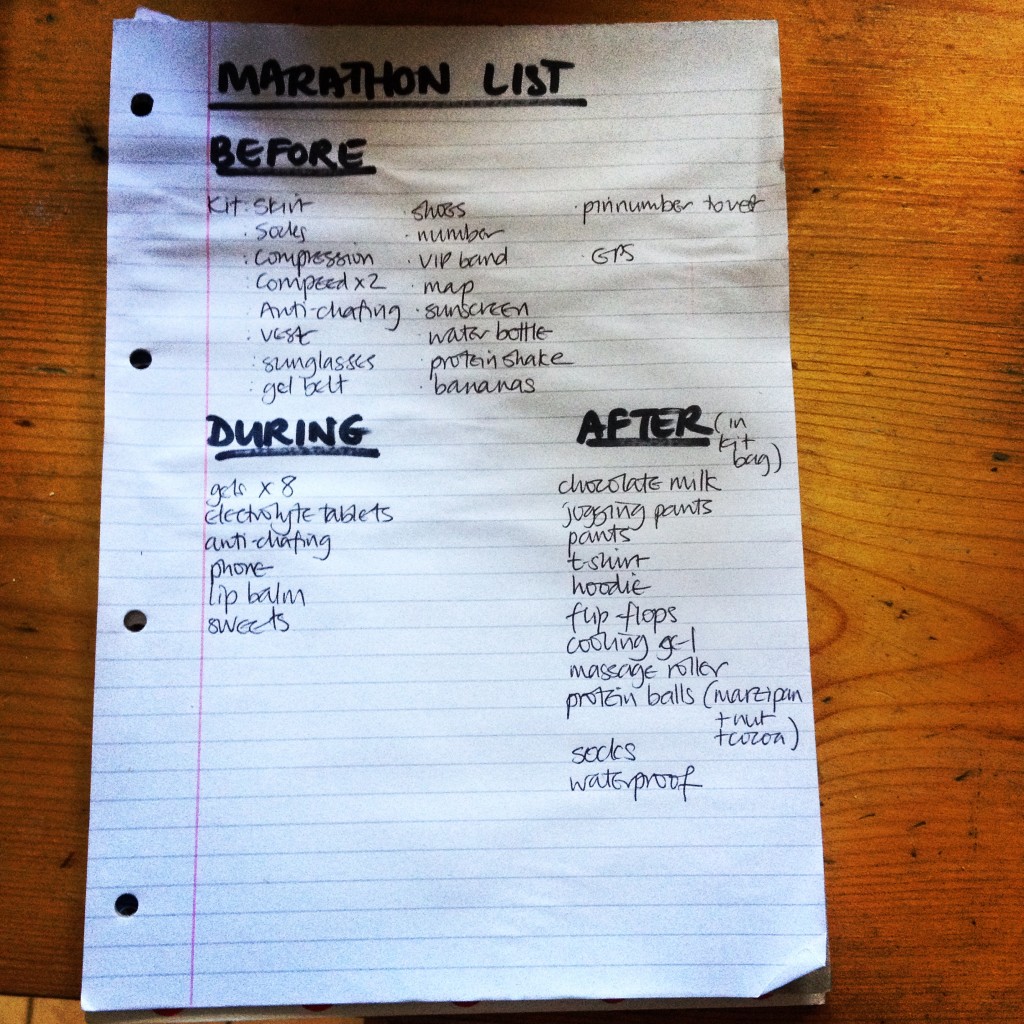 Why was I nervous? The usual pre-race nerves, plus the uncertainty about whether I could actually run a marathon, the doubts about whether I’d done enough training (I hadn’t), my tendon, everything. Oh, and this: 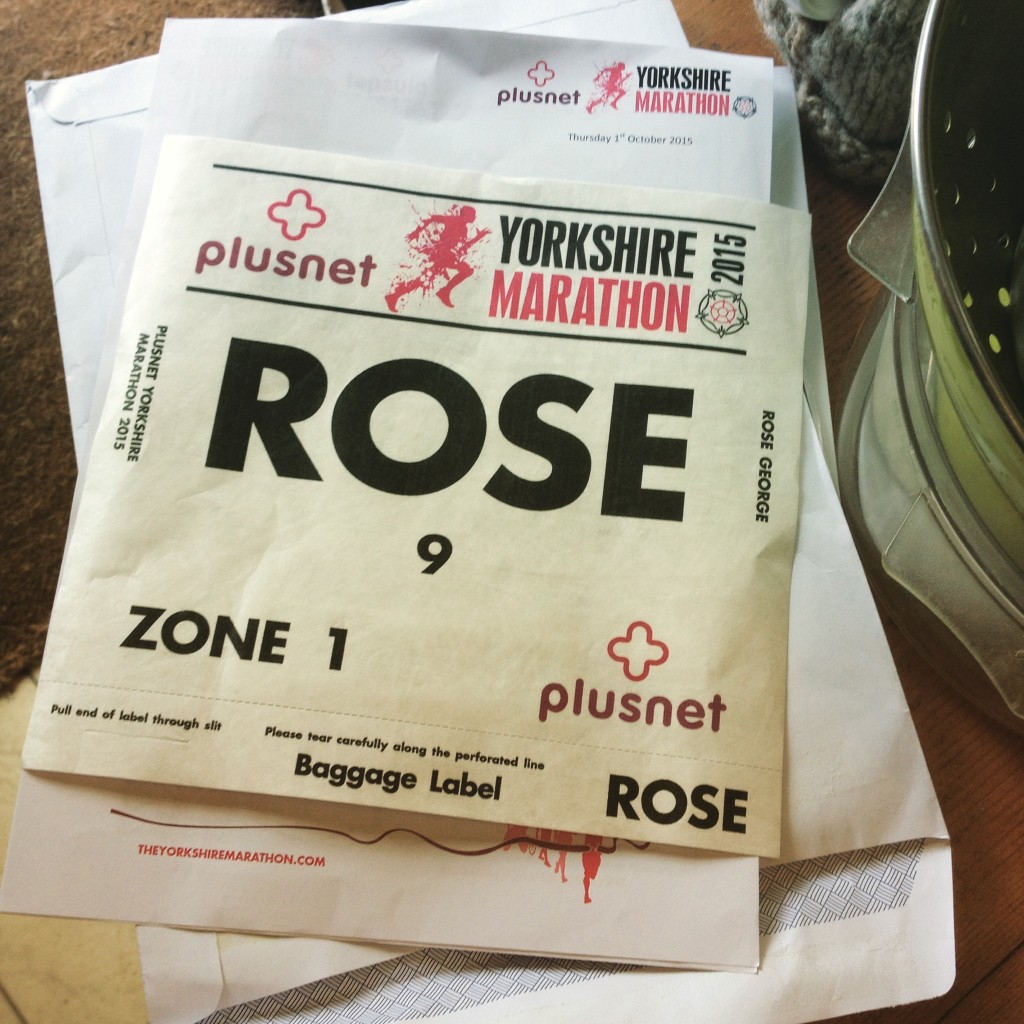 I was a VIP. I had a media place thanks to the kindness of Run for All, the race organizers, who had offered me a place to run in any of their events. They’d sent me a number already several months ago, which was a season ticket for a few races including the Leeds Half, none of which I could do. Then Vicky, the PR, wrote to say that I would be getting a VIP number. I didn’t expect it to have my name on it, nor be number 9. I’ve never been a single digit before. As far as I knew, this meant I would be starting with the elites. With the really really fast people. That was terrifying.

So, to race morning. I slept poorly, and was awake in good time. We were picking up my club-mate Hannah from Leeds city centre at 6.45. That was pretty early but FRB likes to get to races in good time – he was coming to support, by running about ten miles around the course from vantage point to vantage point – and we weren’t sure how much traffic would be clogged up around the university, the marathon HQ. There wasn’t much traffic, and we flashed our VIP parking badge to get past the no access signs. Only no-one knew where the VIP parking was, so we had a merry drive around the campus, which was already busy, until Hannah went exploring for information, and we finally found out where we were going. I had two wristbands for the VIP area, but I smiled sweetly at the man on the door, and as we were so early, he let Hannah in too. Thank you, man on the door, and sorry I was a bit rude about Plusnet, because they supply my office internet and they’re, er, patchy (“do you work for Plusnet?” “God, no”).

The VIP area had tea, coffee, pastries, but I wasn’t hungry, though I knew I should eat something. Most of the time I spent going back and forth to the toilet as usual. I had a banana and I think some pastries. I applied my anti-chafing chamois cream, which is brillliant. If it’s good enough for udders, it’s good enough for my inner thighs: 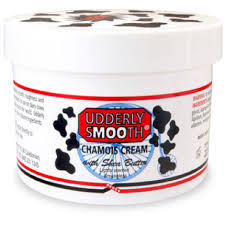 I asked one of the race organizers if I would get trampled by all the fast runners behind me, as we were apparently going to start in front of them. She said, “oh no. You won’t be the slowest celebrity runner.” Obviously I’m not a celebrity. I just write a bit. But the other celebrities in the VIP area included Harry Gration, Mr Burton from Educating Yorkshire, a very large rugby player, the wheelchair athletes, and two quiet Kenyans who arrived with no fanfare and headed to the back of the room. I wish I’d spoken to them, but I was too busy getting in a tizz.

Final toilet visit, but the queue was huge. I knew I would regret all the liquid and coffee, but at 9am we set off, following a woman with a flag. She led us through the crowds. Hannah peeled off at one point to go to Zone 3, and I headed off to the start. Although when I say “the start,” I’m not being accurate. We were ahead of the start. I’m unlikely to get this view of a start line ever again: 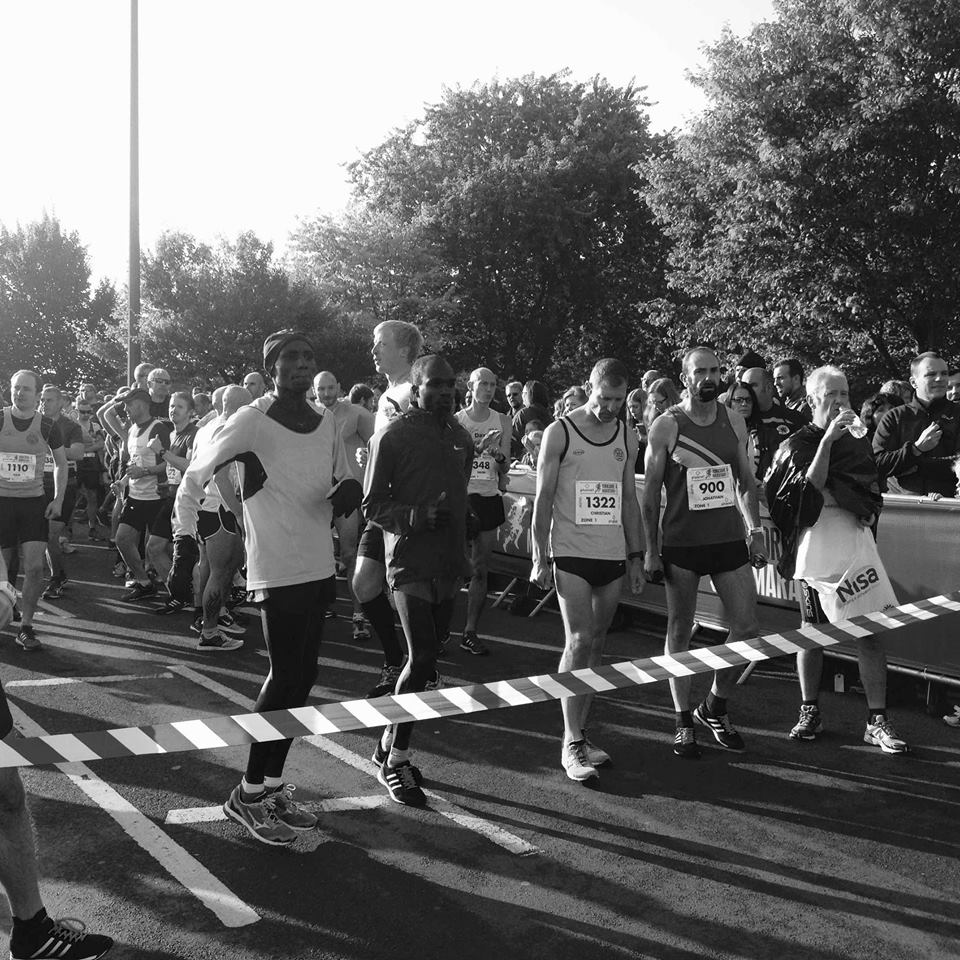 That’s Edmund Kuria, the winner, on the left.

Anyway. There we were, and I realised that I’d forgotten to bring a charity shop hoodie to wear, but it wasn’t cold, and I did a bit of the warm-up. I heard someone yelling “ROSE ROSE ROSE” and turned to see my club-mate Ben, who is fast and was in Zone 1, and he said, “How did YOU get in THERE?” which was a very valid question. I chatted to the country’s most over-active pensioner, also a VIP, and a nice man who said, “oh, you’re the author,” which was a treat (he’s a librarian who will run 5,000 miles in a year to raise money for a hospice). Then sort of suddenly, we were off. And for the next few hours, I was overtaken by about two thousand runners. It began immediately, and it never let up. I enjoyed being a VIP, but being constantly overtaken was demoralising for a while. I didn’t ever get used to it, really. After about two hours, people my pace caught up and it got better. But that’s my only objection. Even if I was given a VIP place again – for which I’m very grateful – I would slink back to Zone 3 where I belong.

Within 20 minutes, I’d been overtaken by a hundred people, and I knew one thing: I was desperate for the toilet. There were no toilets for about a mile, so I had to do my usual and pee while running, then dash to the toilet to wee, wash, dry. After that, I was fine.

York though. What a beautiful place. Last year had been so foggy we could just about see the Minister. On Sunday 11 October this year, the weather was perfect. Cool but sunny. We reached the city walls after about a mile, and then shortly after that, there was York Minister, its bells ringing. At that point. even though I still felt like a snail amongst cheetahs, I grinned. How often do you get bells rung for the simple act of moving faster than walking pace (though for a very long way)? After that, it was down to business: strict hydration and nutrition (nothing for an hour, then a gel and some water every three miles). There were loads of supporters, who were lovely. There was a pipe band again, who stopped playing as I went past, and my favourite Yorkshire marathon feature after the Minster, the priest in Stockton-in-the-Fields who stands on the pavement in his white surplice and rainbow scarf saying things like “Bless you!” “Have faith!” He’s lovely.

I have a terrible topographical memory, so I can only remember highlights: the minster, the priest, the bands, the Elvis impersonator who sang to runners. My neighbour Eve, with a big banner. I stopped to hug her and she said, don’t stop! There were long miles with fewer supporters and more quiet. There were forests. Through one bit of woodland I was overtaken by a tall lad running barefoot. He was extremely serene and very nice, and supporters routinely said, “no shoes! Well done!” (I beat him though). My pace was slower than last year, but I was intent on staying comfortable. My aims were to get round and to get round uninjured. Last year my hip started to give away at mile 18. This year, all was fine. I felt strong, I felt properly hydrated and fed. I saw friends and supporters all the way round. FRB first, at mile 10, then again at 19, on the far side of the switchback. He yelled, “what do you need?” I yelled “coke and chafing cream!” and by the time I got round, he was ready with a bottle of flat Coke (better for the stomach) and the cream. What an angel. I saw the lovely Anne Akers who you may know from Women’s Running magazine and she took this picture: 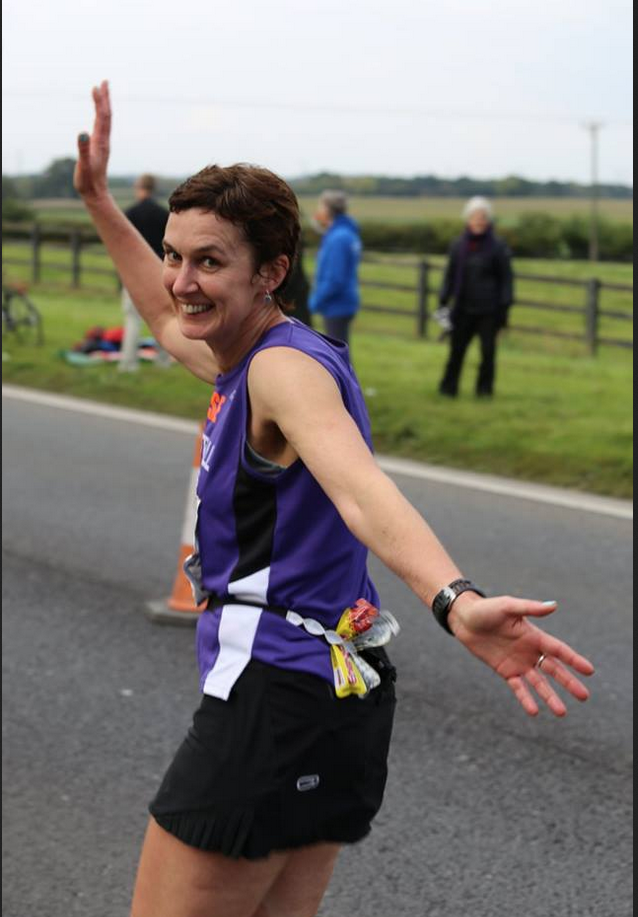 At mile 19 I was interviewed by a man on a motorbike. I tried to look as if I was running serenely, which was good for my form. Also it was nice to have someone to talk to. It’s odd, but despite being surrounded by thousands of people, I was alone for most of the 26.2 miles. It would have been nice to have company. I kept my thoughts busy with the usual: wondering why so many women have terrible sports bras or shorts, wondering at godawful tattoos, admiring fancy dress costumes, gazing at fields, working out how far the next bottle bin was (helpfully, there were signs to tell me). I did run for a while with Jim Meta, a club-mate with a purple beard who has run hundreds of marathons and is faster than me. By then it felt like most people were faster than me. At 20 miles though it got a bit better. 20-23 were hard. I didn’t hit the wall. I’ve never hit the wall yet, thankfully. But those miles just seemed empty. I knew my family were waiting, I thought at mile 23, but in fact it was mile 24.5. So, just as I did last year, I ran through villages that all looked alike, asking spectators, “is this Osbaldwick?” until it was Osbaldwick. Even then, my family were waiting outside my step-brother’s house, at the far end of the village. I made sure to look like I was in one piece. I was, in that I wasn’t injured like last year, when I had to secretly stretch before I reached my mother, so she didn’t see me wincing. This year I felt fine. And I looked pretty good, I think: 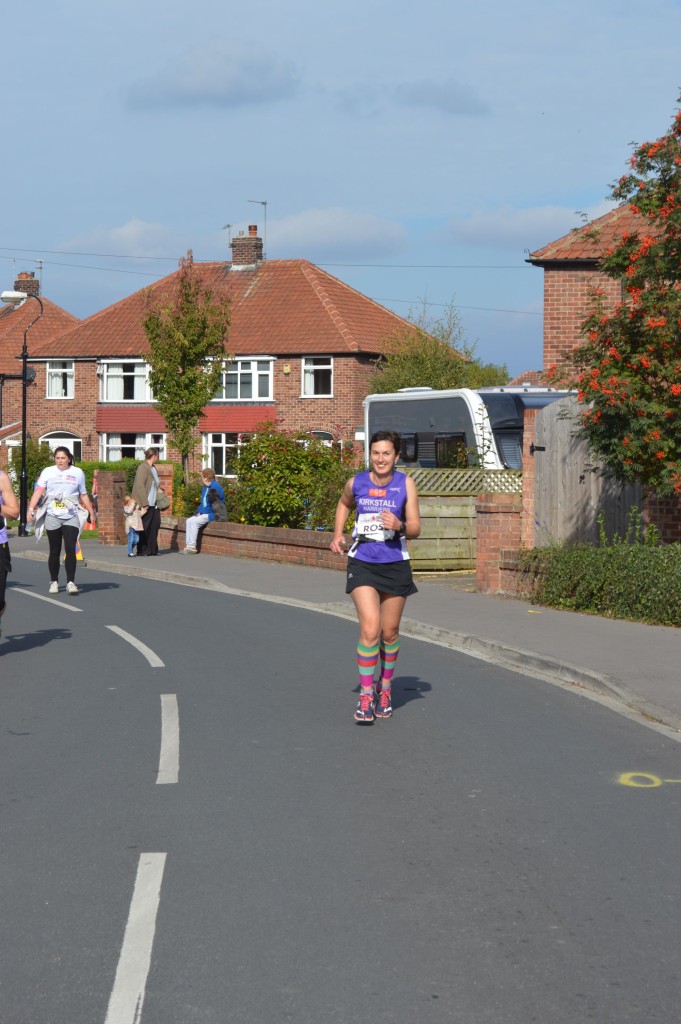 By “good” I mean, all legs in working order, smile on face. And I did actually feel that good. And it was so lovely to see my family waiting there, with hand-painted sign designed by my niece Amelia: 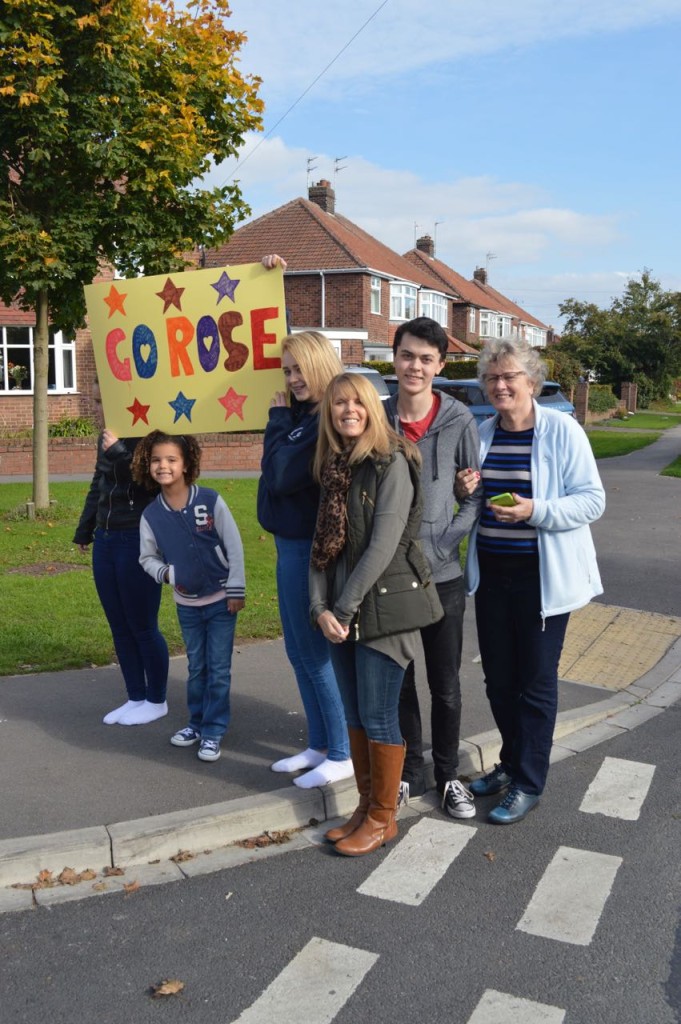 They all insisted I run on, but no chance. I stopped for hugs. I suppose in hindsight getting a hug from someone who has run 24.5 miles on a warm day may not be desirable. Oh well. I love this picture of me and my mother: 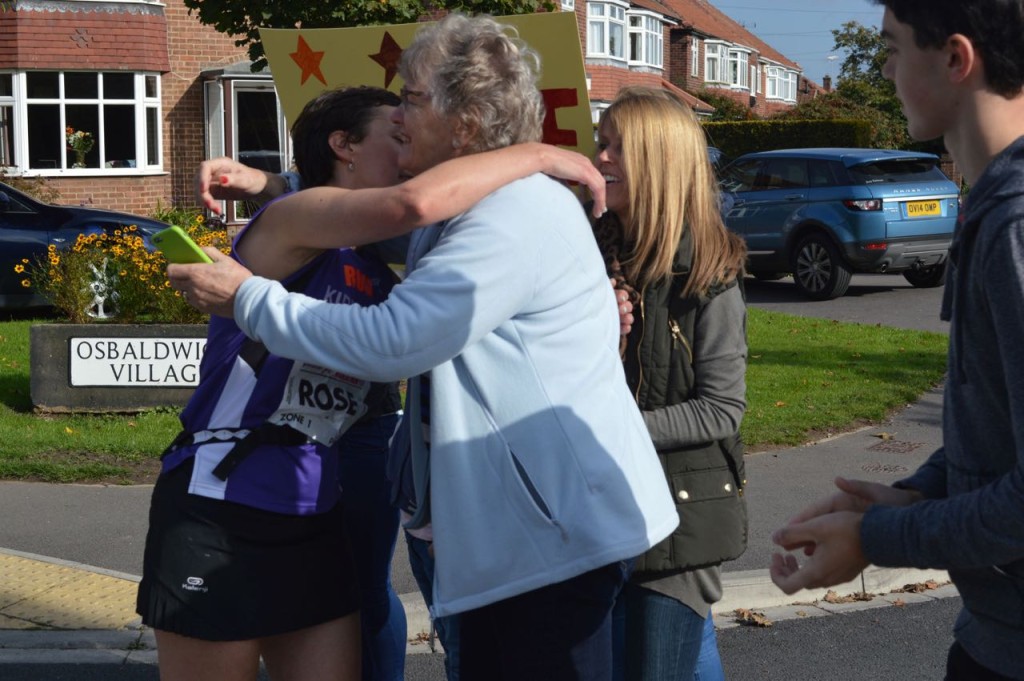 Just round the corner from them was FRB. He hadn’t realised he was so close. He shouted “well done Rose” and then, “Super proud of you!” and that was exactly what I needed to hear. By now I was overtaking people. I knew there was a hill up to the finish, and I ran it all, overtaking people, and I ran and I ran and then I sprinted, and somehow after a year of injury and trouble, I ran a marathon. I ran it in 4 hours and 27 minutes, a personal worst of 28 minutes, and I didn’t care. My tendon didn’t hurt then or afterwards and that’s the most important thing. If you want to run a flat (ish), fast, friendly, marathon through a beautiful city and gorgeous countryside and villages, which is extremely well organized and with wonderful support, but not as head-busting as London, do this one. Next, back up to the fells. 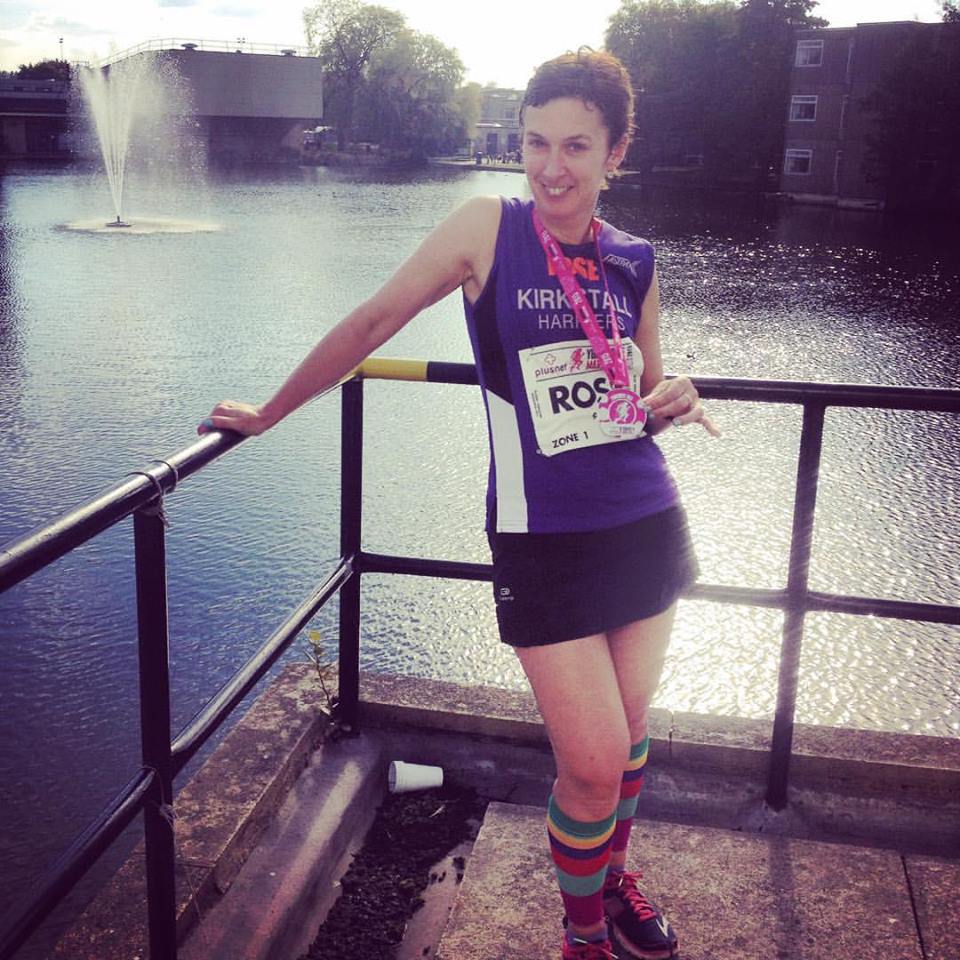